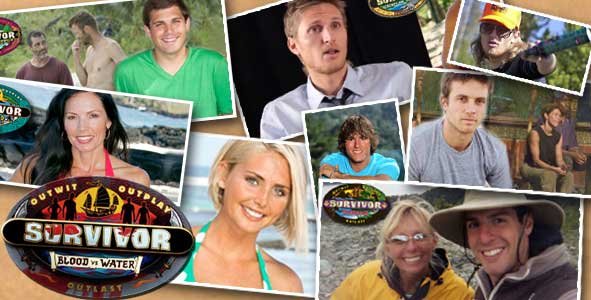 On September 18, Survivor returns with season 27, “Survivor: Blood vs. Water”. In this Rob Has a Podcast special, we’ve put together some of the most interest moments from the Survivor returnees on RHAP.

Rob spoke with Monica Culpepper in her elimination interview on Rob Has a Podcast about her demise in the game and her thoughts on Colton Cumbie. Plus, Monica talks about what her husband (and future Survivor player, Brad Culpepper) thought about her performance on the show.

Show Link: Survivor Monica Culpepper on Getting Sacked by the Swap from March 15, 2012

After Kat’s emotional elimination from Survivor One World, Kat spoke with Rob on her RHAP exit interview about getting blindsided, the meaning of capital letters at tribal council and her hopes for returning to Survivor.

Show Link: Kat E. Remarks: An Interview with Survivor Kat Edorsson from May 3, 2012

Way back during Survivor Nicaragua, Rob and Nicole spoke with Tina Wesson about her thoughts on Season 21.  Tina shared some fond memories from a Survivor All-Stars post-game adventure and discussed what it is that calls people to return to Survivor.

Colton was a controversial figure on Survivor One World and is looking to change his perception in his return to Rob Has a Podcast. Colton spoke with Rob in his one recap podcast appearance with Rob during Survivor Philippines in November 2012

Talking with the Survivor You Love to Hate, Colton Cumbie from March 22, 2012

Survivor Panama winner, Aras Baskauskas has become a “Rob Has a Podcast” standard over the last couple of years.  In the Best of Podcast, we’ll hear three different clips from Aras.

Clip 1) Aras talks about the difference about playing Survivor with all new people vs. playing with Survivor All-Stars

Show Link: Aras on Why They Are Matsing-ing the Blues on Survivor from October 4, 2012

Additional RHAPpearance: Rob Has a Birthday Party LIVE! from October 20, 2012

Tyson is one of the great guests of Rob Has a Podcast. Like Aras, we have three clips from Tyson’s many appearances on the podcast.

Clip 1) Tyson talks about the idea of getting rid of someone who could win the fan favorite and his thoughts on Rupert Boneham who played with him on Survivor Heroes vs. Villains

Clip 3) Rob and Tyson talk about what Tyson might tell a jury in the final 3 about why he should win the game, and much more.

Show Link: Tyson on Survivor Philippines and Much, Much More from November 25, 2012

Tyson Apostol on the Self Destruction of Troyzan from April 19, 2012

Rob Has a Movie Cast: Reviewing Piranha 3DD with Tyson Apostol from June 12, 2012

Join us on Friday night at 10 pm ET / 7 pm PT when Rob and Nicole preview the Survivor season and make predictions on our official “Survivor Blood vs. Water” preview show.