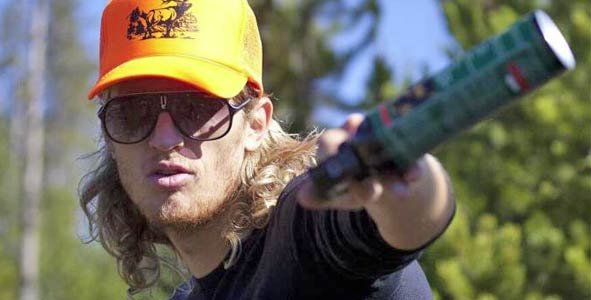 Tyson has a big can of Bear Spray
Now playing

Rob Cesternino brings an early Christmas gift with Tyson Apostol’s sixth appearance. The podcast begins with Rob recapping Tyson on this current season of Survivor. Tyson gives his initial reactions from watching the latest Survivor Philippines episode. Tyson hadn’t been watching this season of Survivor but in anticipation of his appearance on Rob Has a Podcast, Tyson watched this week’s show.

Tyson discusses Survivor’s Jonathon Penner and his “Whatever” attitude and the sound of his voice. Tyson and Rob go over how Survivor and its popularity has changed over the last 10 years. Tyson speaks about what he would do with the winnings from Survivor.

Tyson gives his opinion on the controversial Abi-Maria Gomes. He talks with Rob on if she really has it bad being a foreigner. Tyson speaks about fellow Utah resident, Angie Layton as well sex therapist, Denise Stapley. After Pete Yurkowski tried to persuade Mike Skupin to defect and screw up an idol flush scenario, Rob asks Tyson about his own situation from Survivor Heroes vs. Villains.

Tyson Apostol takes your comments and questions and him and Rob discuss everything from HGH, sleeping on survivor, James Bond in Skyfall, showmancing, star wars and much more. Tyson Apostol and Rob end the show with a discussion about the meaning of life.

RobHasAwebsite.com/CyberMonday – Get the best deals for Cyber Monday and support Rob Has a Podcast on Amazon.com