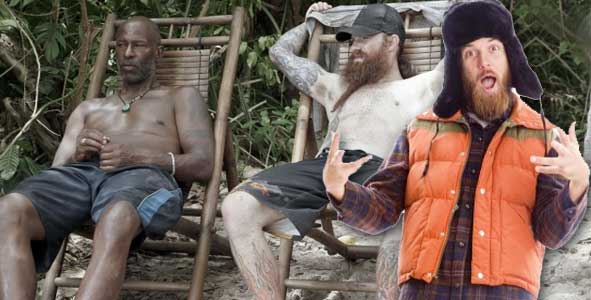 The Tundra Hat is a 5-star piece of apparel

Rob and Aras discuss whether Phillip Sheppard and the favorites made the right decision to keep Julia and vote off Matt Bischoff. Rob and Aras also discussed some ideas for what Brenda and Erik should be thinking during their time at the Gota camp with three of the fans. If Brenda and Erik don’t act now they could still be at the bottom of the Stealth R Us alliance once the six members get back together.

Later in the show, Rob and Aras are joined by the winner of Survivor Africa, Ethan Zohn to discuss an upcoming charity event called LAfest. Ethan is bringing together a number of reality stars to raise money for a very good cause. With Ethan on the phone, Rob and Aras play a game trying to guess which “crazy” person the quote, either Brandon Hantz or Mel Gibson.

Finally, Rob and Aras listen to a number of your voicemail questions and Aras even steals a page from Stephen Fishbach by giving out a fishy award for the best voicemail of the week. It’s a crazy episode of Rob Has a Podcast that you won’t soon forget!

LAfest.net – Come out and See Ethan Zohn and some of your favorite reality stars this Sunday at the Home Depot center.

Earl’s Kickstarter – Find out about what Earl Cole is up to at RobHasAwebsite.com/Smushbox