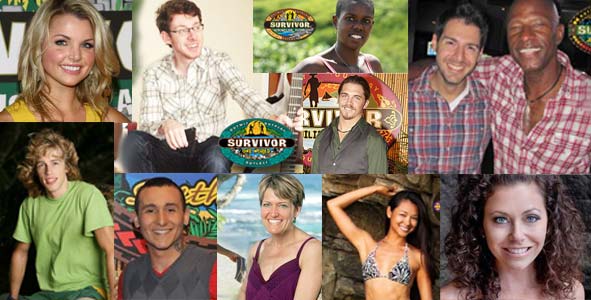 Before they were returning players... they were guests on Rob Has a Podcast.

The entire Survivor community is eagerly anticipating the coming season of Survivor to see these 10 returning players get into action for a second time. This podcast is a retrospective of the best and most relevant moments of each of these players in their appearances on Rob Has a Podcast. We’ve also provided links to each players full appearance to listen to their entire original interviews. We now present, the Return of the Returnees.

Erik joined Rob prior to the finale of Heores vs. Villians to state his case why him giving away the immunity necklace was the stupidest Survivor move of all time – and why he should beat J.T. in that weekend’s Stupidest Move Fan Vote.

Original Show:
Natalie, Kathy on a Pre-Survivor Finale Special and an Interview with Erik Reichenbach from May 15, 2010

After her allies turned on her during Survivor Nicaragua, Brenda called in to Rob Has a Podcast for her exit interview.  Brenda reveals to Rob why she was a fan of his game and went wrong during Nicaragua.

Considered by many to be on the Mt. Rushmore of Rob Has a Podcast, Corinne first previewed the new cast with us during Survivor South Pacific.  Corinne gave us her first impressions and didn’t hold anything back, ever.  However, in this first cast preview, there was one guy who really caught her attention… her future tribemate, John Cochran.  Plus, we also get to hear Corinne’s first impressions on Brandon Hantz in this clip.

Another good friend of the show, Andrea Boehlke is one of the returning players for Survivor Caramoan.  Originally, Rob’s pick to win Survivor Redemption Island, Andrea has appeared on RHAP several times, including being a finalist for the 2012 Miss Survivor competition.  In her one and only full episode recap, Andrea gives her thoughts on future tribemates, Cochran, Brandon Hantz and Dawn Meehan.

The Survivor South Pacific Premiere with Andrea Boehlke from September 15, 2011

Nicole Has a Girlcast LIVE with Andrea Boehlke from November 17, 2011

An Interview with Miss Survivor Finalist, Andrea Boehlke from February 7, 2012

Phillip became infamous on Survivor Redemption Island as the former Federal Agent who may or may not have lost it while working with Boston Rob Mariano.  Phillip became a good friend of the show and in his appearance during Survivor South Pacific he professed his love of Sophie Clarke’s game but had some criticism of what his future tribemate John Cochran was up to.

After giving up immunity at the Final 5 on Survivor South Pacific, Brandon Hantz did an exit interview with the Final 5 players the day after the finale.  On a call with Rick Nelson, Brandon spoke to Rob and Nicole about what he thought about his move.

One of the most talked out Survivors in the history of Rob Has a Podcast is John Cochran.  Cochran gave us plenty of entertainment on Survivor South Pacific but also caused quite the controversy with his flip from his tribe at the merge in that season.  Cochran’s made a few appearances on RHAP, but during his spot on the Survivor One World premiere recap, Cochran discusses his challenges in going back to survivor.  Find out what Cochran is planning to say to people worried he might flip during the All-Stars.

What did John Cochran Think of Colton and the Survivor One World Premiere from February 16, 2012

One of the nicest people to ever play Survivor is Dawn Meehan from Survivor South Pacific.  Dawn is another great friend of the podcast and is famous for sending out her homemade bread to people all of the time.  In this appearance during Survivor One World, Dawn discusses which types of bread a number of current and former Survivor players would be most similar to.

Dawn Meehan on the Difficulties of Being a Survivor Mom from March 15, 2012

Last but not least, our 10th returnee for next season spoke with us following the finale of Survivor Philippines, yet was able to make two RHAP appearances in less than 24 hours.  In his official exit interview, Malcolm discusses how he was able to get a final four deal struck with Mike Skupin and Lisa Whelchel.

Interviews with the Survivor Philippines Final Four from December 17, 2012

Special Thanks to all of the interns of Rob Has a Podcast, you guys do not ever get the credit you deserve for helping me with this podcast.  Thanks  specifically to those of you who went back to listen to these old shows in their entirety:  Erik Nelson, Brandon Bryce, Jessica Frey, Mark Celera, Tyler James Linder, Taylor Cotter, Mark Full, Alexander Thal, Clayton Spivey and Scott St. Pierre.

You guys make my life so much easier!   -Rob