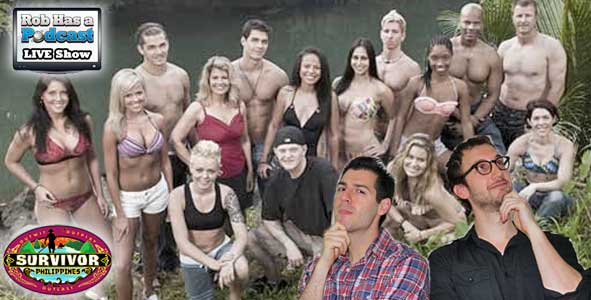 Even the Know-it-alls don't know who will win Survivor tonight!

Rob and Stephen are live after the finale, with Rob broadcasting on location at the finale after Denise Stapley is crowned the winner of Survivor Phillipines. Stephen felt it was Denise or Malcolm’s to win, depending on who won immunity at the Final 4. He felt Malcolm’s advantage at the challenge was not a very good one, as a second chance does not help anyone who is bad at the challenge to begin with.

Rob and Stephen debate what would have happened if Malcolm had voted out Denise at Final 5. Rob admitted he had been hard on Denise in the last few weeks, but felt she became a winner at the Final 4.

Rob and Stephen then discuss Denise’s merits as a winner, comparing to other winners, including Sophie Clarke. Then they talk about how big of mistake Malcolm made by hemming and hawing when Denise talked to him about making a final alliance. They also talk about the jury, and overally the thought the jury was pretty tame for the most part, but felt Penner had a good speech even if it was a bit hammy.

Then Parvati Shallow makes an appearance on the Know-it-Alls and reveals that she is happy with Denise as a fellow winner. She went to every tribal council, and didn’t really make any enemies. Parvati does admit that she thinks Malcolm would have been a better winner, and she appreciated his sex appeal on the island.

Then Baker’s Dozen blogger Andy Baker gives Rob his take. He was rooting for Skupin, but thought lately the evidence was pointing toward Denise and didn’t want to admit it. Next, Rob and Stephen talk about Penner bringing up how Lisa Whelchel was on the Facts of Life during his jury questioning. Stephen thinks it was a bit unfair of him to do that, but Rob points out that he didn’t bring it up at Ponderosa– he waited until Tribal Council. They also talk about Kalabaw’s missed opportunity, when they voted out Katie instead of Denise. They feel that was the big mistake of Jeff Kent and Penner and would have changed the course of the game. They also talk about whether Malcolm really would have beaten Denise, as only Jeff Kent raised his hand at the reunion to indicate that he would have switched his vote.

Stephen thought Lisa got too much airtime at the reunion show, but they both thought  Probst did a good job talking to everyone at the Finale. Rob wonders if Dawson’s kiss with Jeff Probst was staged, but Stephen didn’t think so. Andy Baker provides inside information, as he was in the audience and saw Jeff speak to his wife directly after that incident, seemingly to make sure she was okay with what happened.
This is the first time that Rob’s preseason pick won the game, so it has been an exciting week for Rob after getting into the Hall of Fame earlier in the week. Rob was also elated that Penner shared information in his jury comments that he learned on his RHAP appearance in 2011– he noted that his record of being voted for the most was broken by Philipp Shephard, a fact he learned from Jeff Pitman’s listener question.
Then Parvati brings Malcolm Freberg as a guest for the Know It Alls. He is still feeling bitter and says he has been told “You should have won” about 2000 times. He shares some fun information from backstage. He says Jeff Kent is hilarious and was telling off CBS, refusing to go to makeup, and that he and Jeff Kent bonded over their facial hair. He says Carter is Spicolli in real life, and always speaks in sentence fragments. Malcolm actually wishes they showed more of the mean things he said– he thought he was going to be portrayed more like Tyson rather than the “golden boy.”
Rob is impressed with Parvati doing an exemplary job fulfilling her Miss Survivor duties by wrangling guests for his finale show. She brings in Lisa Whelchel next, who talks about whether she thinks the jury was fair to her, and why she didn’t keep Abi over Denise. She wanted Denise there to be another strong player to battle against Malcolm in the final immunity challenge. Stephen asks Lisa what she thought about Penner outing her as a child star on the Facts of Life. Lisa shares which players she will be friends with for life.
Rob and Stephen wrap up the show with a couple of listener questions but Rob is soon ushered out of the backstage area by a Russell Swan doppelganger. Tune in tomorrow for Rob’s interviews with the Final 4!