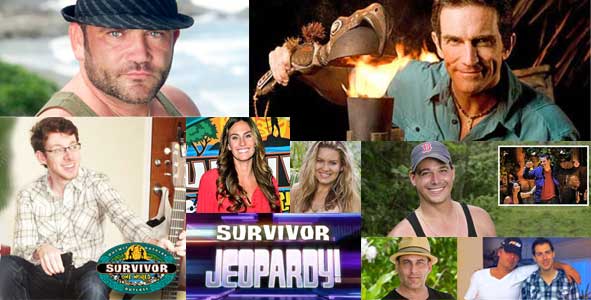 It was a year that didn't Suck.

Before we put 2012 in the books, it’s time to take one last look back and some of the best moments on Rob Has a Podcast in 2012. Rob Cesternino sets up some of the funniest moments from the year gone by. Here are the clips that are included on this show:

Russell Hantz discusses his attitude about his gameplay on Survivor.

The First Ever Miss Survivor is Crowned (7:05)

Rob and Nicole Cesternino reveal that the winner of the first ever Miss Survivor competition is Parvati Shallow.

Original Show: We Reveal the Winner of Miss Survivor on the LIVE Results Show

John Cochran on the Survivor: One World Premiere Podcast (10:35)

Cochran reveals that he is podcasting with Rob and Nicole without a shirt.

Original Show: What did John Cochran Think of Colton and the Survivor One World Premiere?

After a two year hiatus, Richard returns to RHAP with his thoughts on Survivor and some stories about sharing a hot tub with Boston Rob.

After a long courtship, Shane Powers finally agreed to do the podcast with Rob and discuss Shane’s biggest issues with Rob over the years.

Original Show: Rob Has A ShaneCast: Our Exclusive Interview with Shane Powers

In her appearance on the podcast, Julie Berry compares One World and Vanuatu and tells us what a Soul Family is.

Rob and Stephen Fishbach answer a question about a suggestion for a Survivor season with all people who really need the money during the Survivor Think Tank.

Original Show: The First Ever Survivor Think Tank – Stephen Fishbach on How to Fix Survivor

Willie Hantz After His Expulsion from Big Brother 14 (36:35)

The brother of Russell Hantz makes his first RHAP appearance to discuss the famous headbutt incident from Big Brother 14.

Original Show: Willie Hantz on Being Expelled from Big Brother

Musical Number:  The Hantz I Used to Know Video

Survivor One World winner, Kim Spradlin uses her special talent to tell us what animals the new Survivor players look like.

One of the great white whales Rob was chasing and finally got to interview was 4 time Survivor player and Survivor Redemption Island winner, Boston Rob Moriano.

Jeff shares a specific example where, when Penner was out of an immunity challenge, Jeff says, “Penner is in trouble tonight at Tribal Council”. The fans were all over Jeff about this comment, so he asks Rob if that is an example of potentially influencing the game.

Rob hosts Survivor Jeopardy between Colton Cumbie, Spencer Duhm and Sarah Dawson as the competitors give responses from the “Survivor Before and After” category.

Original Show:  This IS Survivor Jeopardy

Rob found many opportunities to use his Penner impression throughout the season, and it was well received, except with maybe one person.

Abi-Maria, the villain of Survivor: Philippines, had mixed popularity during the year, and Rob switched his opinion of her game by the end her time on Survivor.

It was an exciting week for RHAP.  Being in Los Angeles, Rob was able to catch up with other former Survivors, have brunch with the RHAP interns, and was invited to do a LIVE Finale recap show with Stephen Fishbach from the media area backstage.  There are many great highlights to choose from, but Rob reserved this clip for season 25’s champion.

Debb From Survivor: The Australian Outback on Why Skupin Lost (1:11:35)

There were many special guests on this show. One of these guests, Debb from Survivor Australian Outback, shared why Mike Skupin did not win this season.

Best of Survivor One: World

Mentioned During the Best of 2012, this highlight show from May recaps the best moments on RHAP from Season 24

Original Show:  The Best Moments of ‘Survivor One World’ on Rob Has a Podcast