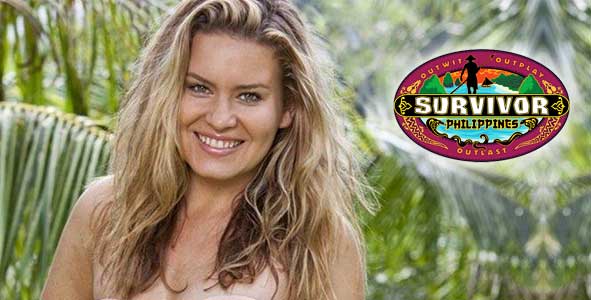 Abi-Maria Gomes brought her fiery Brazilian personality to Survivor Philippines this season and somehow was voted out of the game – despite the fact that she would’ve likely been an easy opponent to beat in the finals. Rob Cesternino talks to Abi-Maria in the Survivor exit interview on Rob Has a Podcast.

Rob starts by discussing the turnaround that he had done on Abi-Maria and how he’s come to like her on the show. He wants to know why Abi was voted out of the tribe when it would’ve helped all of the other players (except Denise) to keep her around. Abi says that’s because the other player are morons and idiots. Rob doesn’t understand why Malcolm, Lisa and Skupin made a plan to vote out Denise but then didn’t go through with it and Abi doesn’t understand either.

Rob asks Abi-Maria about her relationship with Denise Stapely and why the two of them couldn’t get along in the game. Rob wants to know if Abi-Maria believes that she would’ve been better served had she been nice and sweet like Lisa Whelchel while she was on the island. Abi also says that she knew nobody was fooled by her “Fantasy idol” and that she was using a scroll to simulate what the fake idol would be.

Going back to pre-merge times, Rob asks Abi-Maria about her strained relationship with RC Saint-Amour. Uncharacteristically, Abi-Maria takes the high road and says that RC was a tough competitor and that’s why she wanted to get her out of the game. Abi was also surprised to see to what level Pete Yurkowski was involved with getting the two women to fight.

Rob asks Abi-Maria about what she thinks about Malcolm Freberg and his game. Abi was positive about Malcolm and her time with him. Rob also asked Abi to give her thoughts on Lisa’s game and Abi felt like she was trying to work out a lot of personal demons on the island – but maybe she can exorcise Abi-Maria next.