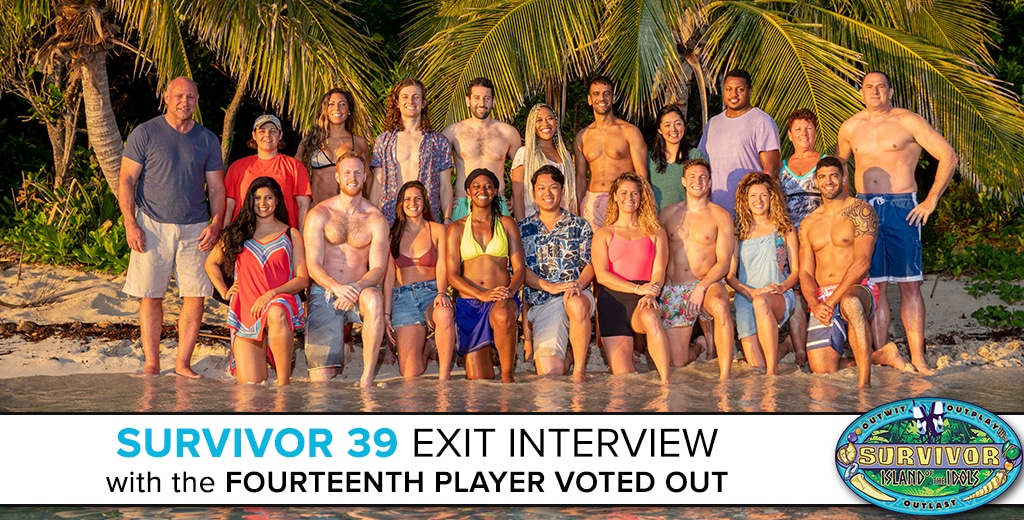 Survivor 39 Exit Interview with the Fourteenth Player Voted Out

Rob Cesternino interviews the fourteenth player voted out of Survivor: Island of the Idols in this exit interview podcast. This player was voted off Survivor on December 11, 2019, becoming the seventh member of the jury.

Who was voted out on Survivor 39 Episode 13?

Elaine Stott was voted out of Survivor on December 11, 2019 by a 5-2 vote. A member of the merge tribe Lumuwaku, Elaine found herself at the bottom near the end as a big threat in the game. She found a hidden immunity idol during the merge and subsequently played it on day 32, but it negated 0 votes against her. She was voted out on day 35 after being considered a player who could easily win the game.

Rob and Elaine discuss what happened at her last tribal council and how she opened up to everyone. Rob also asks Elaine about her attempts to convince anyone to let her stay. Elaine reveals how she campaigned to every single person to get Noura out instead of her. They also talk about her idol play after Noura announced that she had one, why she voted out Missy, what it was like to play with Noura, and much more from her 35-day journey in the game.

“I never wanted to give too much because I was already too likable and I thought, ‘man, if these people think I’m smart, this is not going to go over well. If they think I’m compelling or whatever, then yeah, I tried not to do that, but because I kinda knew it was set in stone, I spoke my truth in the moment..”

– Elaine Stott (Survivor: Island of the Idols) on Rob Has a Podcast

More from Elaine on Survivor: Island of the Idols

Schedule of the RHAP Survivor: Island of the Idols Episode 13 Podcasts