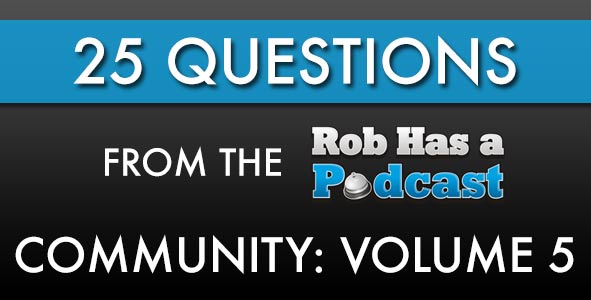 25 Questions From the RHAP Community: Volume 5

25 Questions From the RHAP Community: Volume 5

Rob and Nicole Cesternino once again get back together to record another “25 Questions from the RHAP Community: Volume 5”.

Tom Polite: How do you intend to maintain your reputation as the “bad boy” of reality TV podcasting in 2015?

Christopher Nowak: In a lot of your Survivor: All-Stars exit interviews, you talked about wanting to go into stand-up comedy. Could you talk a little more about how this went and why you’re not pursuing it anymore?

Innessa Melamed:  Y do u really think Probst & Burnett decided not to do an all-star season 30? Pre-season alliances maybe? Too expected maybe? It’s too bad, it would have been very entertaining. I don’t buy probst’s explanation in that article.

Logan Messenger: If you could switch lives with one Survivor player from San Juan Del Sur for one day, who would it be?

Luis Dieguez Lopez Portillo: Its 15 years later, we are about to start season 30 of Survivor, and the grand prize is still one million dollars. Isn’t it time to up the ante? A million dollars may have been impressive on 2000, but with inflation and stuff, it no longer is. Increasing the price money should also encourage players to be more cut throat and willing to do more big moves to win the money.

Jordan T. Chong: If you had one to have one person represent you on a season of Survivor and Big Brother with your life on the line, who would it be?

Lee Whitten [email protected]_Whitten: Who would you choose to represent you in a game of Survivor with your life on the line: Purple Kelly, Rancher Rick, or J’Tia?

Jeff Schwartz [email protected]: Reality Blurred reports that you’re moving again. Is this code for the 2 of you going on Blood vs. Water 3?

Justin Feinberg: With the RHAP five year anniversary coming, what has been your favorite season of reality TV (any show) to podcast about? Your least favorite? Nicole’s favorite and least favorite (from when she co-hosted more regularly)?

Albert Vargas: Nicole, Rob has done a great job increasing the size and and improving the quality of the RHAP network in 2014. What would you like to see Rob accomplish on a personal level in 2015.

Brandon Davis: Are you pleased with the results of Evolution of Strategy so far? Did you come away with different feelings about particular seasons?

Alexandra Woodward: What’s the coverage going to be looking like for BB Canada? Trying to find a new live feed correspondent? Will there be one show per episode or just one per week? etc…

Dan Heaton: Where do see podcasts going in the next few years? They’ve received a lot more attention because of Serial and other recent shows. Are they set up to take off even further?

Matt Holtzclaw: Watching television is usually a family bonding experience, has being the first family of podcasting ruined that aspect of television watching for you guys?

@TeddyBluebea: In celebration of Back the Future anniversary what would 2015 rob say to his 2013 self. And vice versa for Nicole.

Bob Phelan: What are the odds of getting Probst-cast 2.0? Feels like the tide has changed a bit since his last appearance with a focus on all new players.

Nick Orr: Are you planning to run a RHAP poll to rank the Survivor Seasons after S30/TEOS is complete (like the Top 20 Survivors one/s)?

Zachary Chong: What other podcasts do you listen to?

Stephen Fox: Can we have more Nicole on the podcast. Miss her regular opinions

Kathryn Breazeale: Can we here a “Dominic did something adorable/hilarious” story? Not sure there’s THAT much overlap between reality super fans and people who love a cute baby story, but I will smile!

Dan Sinensky: What is something Nicole wants Rob to podcast about (which he currently doesn’t cover)?

Paul Borges: Would either of you allow the other to constantly post butt shots on instagram if it helped pay the bills.

25 Questions from Rob Has a Podcast Community: Part III