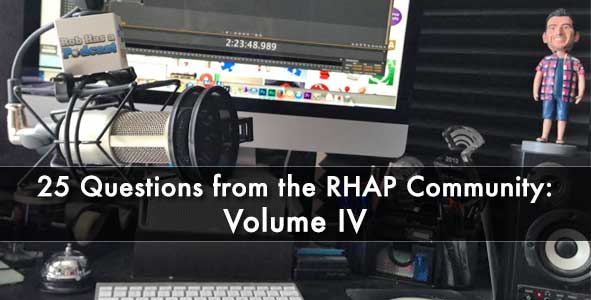 It’s an RHAP tradition that after each Survivor season, Rob and Nicole get together for “25 Questions from the RHAP Community”. In this episode Rob and Nicole will answer 25 questions submitted to us via Facbeook and the RHAP Voicemail inbox:

These are the 25 questions that were answered by Rob and Nicole:

#1) Patrick Rettger:  Survivor started filming earlier this week. Have you heard anything?

#2) Doris Gutenkunst: What would you do if the powers that be cancelled Survivor? I had that thought after hearing about TAR’s move to Friday.

#3a) Scott Bob: How much interaction do you have with guests before and after a podcast?

#3b) JJ Hannigan: It looks like a few others have already asked about the process of booking guests, but I’m also curious about this process. Do you usually inquire via email, phone, twitter, or their agent? Do you ask guests about a specific week, or do you ask their general availability and then try to piece together a schedule based on availability? How far in advance are guests booked generally?

#4) Adam Ansel: What was your lowest moment on Survivor: The Amazon (besides getting voted out)? And how did Nicole react when she saw you get voted out so early on All-Stars?

#6) Lee Whitten: Can we please settle the question that haunts all longtime RHAP listeners: Did Nicole have inside information on Fabio’s win?

#7) Alexandra Woodward: How do you think the “RHAP bump” has impacted Survivor (and Big Brother) via Twitter, casting, and the show in general?

#8) Bill McMahon: Rob, you talked this week about the hypothetical situation of Jeff Probst’s talk show being successful, and what impact that could have had on the future of Survivor. Given the new momentum the show has, do you think it carries on beyond Probst’s hosting? If it does, do you think they would pick a former Survivor to succeed him? If so, who do you like for that role?

#9) Curt With a K: Any chance that DMKs will be more regular next season?

#10) Voicemail from Holly Not Hoffman

“Personally I don’t like it. If it was my decision I would not let them use social media. I agree with you it is too risky. This is a CBS decision and I don’t have any say in it. Generally speaking I don’t think it gives us one more viewer and so the upside is not worth the potential downside.”[…] “I’ll answer this again in the hopes that the VP of publicity is reading this — I do not think we should do it. It works on other shows but not a competition show that is still on going. Big risk. I fear it will bite us in the butt one day.”

#11) Nick Fishman: If you could time travel back to talk to yourself 10 years ago (paradox free), what would you tell yourself about?

#12) Mike Shaheen: I’ve always wondered generally how Reality TV stars move forward professionally after being on a show. Do they put their experience from the show on their resume at all or do they leave it for the employer to find? If so, do they just say they were a contestant or do they use a professional title like “Television Personality” or “Junior Deputy Firewood Bitch”?

#13) Anna Jose: What are your thoughts on The Challenge and would you ever podcast about it? You’ve mentioned the idea of Survivor: Rivals, so what would you think about a Survivor: Battle of the Seasons?

#14) Felipe Chamon: Now that we are a couple of years away from the first Mount RHAPmore, who are the four Survivors and four Big Brother houseguests that create their respective Mount RHAPmores, and then which of those are in the current Mount RHAPmore?

Also, will there ever be a return of Nicole Has a Girlcast?

#15) Matt Holtzclaw: If they were real people, who would be a better podcast guest, Frank Underwood, Jack Bauer or Tyrion Lannister?

#16) Voicemail from Mike about Cagayan Guests on RHAP

#17) Rebekah Markowitz: You often skirt around the answer, so I want to ask you directly: Are you done with Survivor, or would you consider going back in the future if you were asked?

#18) Matthew Wojis: How did you get your parents to accept your being part of a reality show? Did they ever protest with any lack of understanding?

#19) Voicemail from Matt from Mineola about Game Shows

#20) Billy Gross: Rob, how do you choose what shows you are going to cover on RHAP and PSR? Are they just shows that interest you or do you choose on which shows will attract the biggest traffic to your website? Also, Nicole, with the addition to PSR and the new Reality RHAP up feed have you considered doing your own podcast about a show? (If yes, what show would you want to cover?)

#22) Kat Smith: General question: do you count Tyson and Aras as good friends because you had a good time when you first podcasted with them, or did you have a good podcast the first time they were guests because you were already friends? Basically, chicken or egg?

#23) Voicemail from Regis about Tony’s impact on Survivor

#24a) Taylor Cotter: If BB16 is all-stars, who are some of the players you would like to see?

#24b) Kenneth Gregory Jackson: Will Big Brother 16 err on the side of caution and recruit boring houseguests?

#25) Tania Ogg: After trying to get through your latest Hantzcast, what have been some of your most awkward podcasting moments?

Bonus Question) Paul Borges: What was the deal with the “Rob, have a wonderful day” tweet from J’Tia the other day?

Naturebox.com/RHAP – Save 50% on your first Nature Box