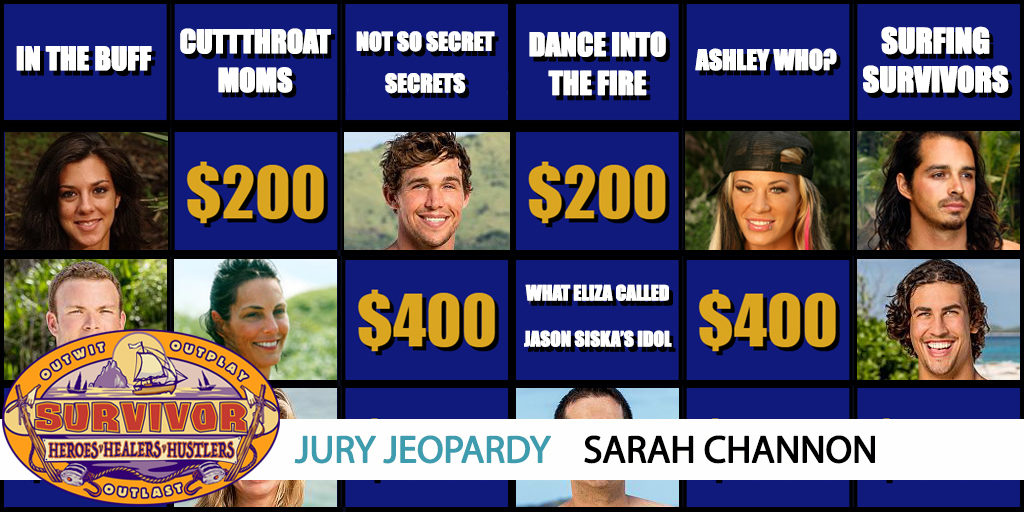 Every season, the RHAP bloggers compete with other Survivor websites in Jury Jeopardy, a contest to predict the jurors’ votes.

It’s the time of the season when Survivor writers across the internet give up on winner predictions, and instead focus on guessing how the jury will vote. Last season, the team of geniuses right here at RHAP carried the victory with a perfect score, but True Dork Times, A Tribe of One, Purple Rock and Inside Survivor are ready to challenge us for the crown. (Reality Blurred is sitting this one out due to travel plans.)

Rules: Predict each juror’s votes in order of preference for the final five. (We will also rank the votes of the final five, though only those who make the jury will be counted.)

If any given juror’s vote is ahead of the other two finalists in our ranking, then we score a point. I.e., in a final three of Devon, Mike and Chrissy, if Desi votes for Mike, that’s one point for us; if Cole votes for Chrissy, we don’t score.

While we bloggers rarely agree on anything, we were particularly at odds in our jury thoughts this time around. I have averaged out our predictions to create the below consensus ballot which absolutely none of us will stand by.

Matt says: Desi probably would’ve been a lot happier getting voted out one spot earlier and being sent on a free vacation, but alas, she’s here with the responsibility to cast a vote. Expect light/generic questioning from Desi with a small chance of heated comments towards Chrissy if she’s there. Desi is a top contender for quietest jury member at the roundtable, even with JP as her competition.

Matt says: Cole is a genuinely nice guy, happy to still be in Fiji hanging with some cool new people. It’s unlikely Cole is holding much resentment towards anybody, but if he does, it would probably be towards Ben. The two clashed on a consistent basis, and it all seemed more personal than game-related. Cole’s vote will coincide with his girl Desi’s and probably Joe’s. The Buy 1 Get 2 free Healer votes are going to be a hot item… in more ways than one.

Catherine says: Bold prediction: JP is going to be the first juror in Survivor history to say absolutely nothing at Final Tribal Council. No questions. No ‘things like that’. Just nothing. His vote won’t even be shown.

Dan says: Working under the new jury format, a guy like Joe will have plenty to say. The question is which player will get his support. If Mike reaches the end, how could Joe not back his “Coconuts” buddy? I also doubt he’ll say one nice word about Ben, though he may admire his gumption. I don’t see Joe backing the quiet play of Chrissy, who makes zero waves at Tribal Council. Joe will want to pick someone like him; could he actually vote for Ben?

Catherine says: I don’t think Lauren is going to be bitter as a juror, and if her friend Devon isn’t up there, I think she’ll reward Ben’s game play. Or perhaps she’ll give her vote to Dr Mike, who will immediately throw it in the fire.

Sarah says: Ashley’s been on a voyage of self-discovery since reaching Ponderosa, and is most likely to be preoccupied with her ‘thing’, the finalists’ ‘things’ and any ‘thing’ they may have together. Fortunately Joe will be on hand to get her back to her heroic roots as she defends the final three from his grandstanding accusations.

Sarah says: England’s least likely champion will have to return to democracy as he faces his disloyal knights, but he’ll be benevolent in defeat. Sadly, I doubt he’ll carry on the analogy by championing “Lady Liberty” “Guinevere” or “Lancelot”, but the greatest gift this holiday season would be if he passed the crown of his cowboy hat onto Devon. (Look, Ben, all I want for Christmas is a screenshot of Devon wearing the hat by an open fire. Is that too much to ask?)

Logan says: If a scenario ends up with Chrissy on the jury, I will be truly amazed. I can’t see Chrissy having a question other than directing it at whoever was responsible for voting her out, and attacking that person for making a dumb move because “she was an obvious person to take to the end,” and frame it as a massive strategic misstep for whoever eliminated her. This will likely trigger a big campaign from her for everyone on the jury to vote Ryan. I do not expect Chrissy to be a bland and quiet juror. The Supermom wants answers!

Dan says: Game admires game. Devon might hate playing against Ben right now, but he’ll vote for him to win. Devon plays up the goofball shtick, but he takes the game seriously. With that said, I could see him throwing a vote to his buddy Ryan. It’s one last chance to cause a little chaos, though it won’t be enough. Devon would just give Ryan a better shot at $100,000. I see Devon as a possible final juror, so the wound will be fresh. We won’t have a clear grasp of whom Devon will choose on the show, but I don’t see him doing anything nuts with his vote.

Sarah says: Mike’s been waiting fifteen years for this, and he’ll spend his time negotiating with the other jurors to force a tie so they can finally find out what would happen, until an exasperated Jeff spills the beans. Fortunately, Mike’s the man to recover from this premature climax. He’ll be fully satisfied with finally voting for his mancrush—or with telling us who has the second most transcendent ferocity of the game.
Mike will vote for: Ben / Devon / Chrissy / Ryan

Logan says: If a scenario ends up with Ryan on the jury, I will be truly amazed. Let’s face it, Ryan isn’t going to take jury duty too seriously. He is going to make a fun analogy for each of the three contestants, crack a few jokes for the audience, lightly touch upon who he feels is deserving to win this game (either his pal Chrissy or his buddy Devon), and then exit stage right without much incident.

Tiebreakers are all the rage in the fandom this season. Ours is to predict the breakdown of votes between the winner and runners up. Whoever is closest to the number of votes cast for the winner (or if still tied, the runner up) will be sole victor.

Those are our predictions. Disagree? Let us know in the comments or on Twitter using #JuryJeopardy. And while they’re clearly wrong, you should probably check out the hot takes of our competition too: