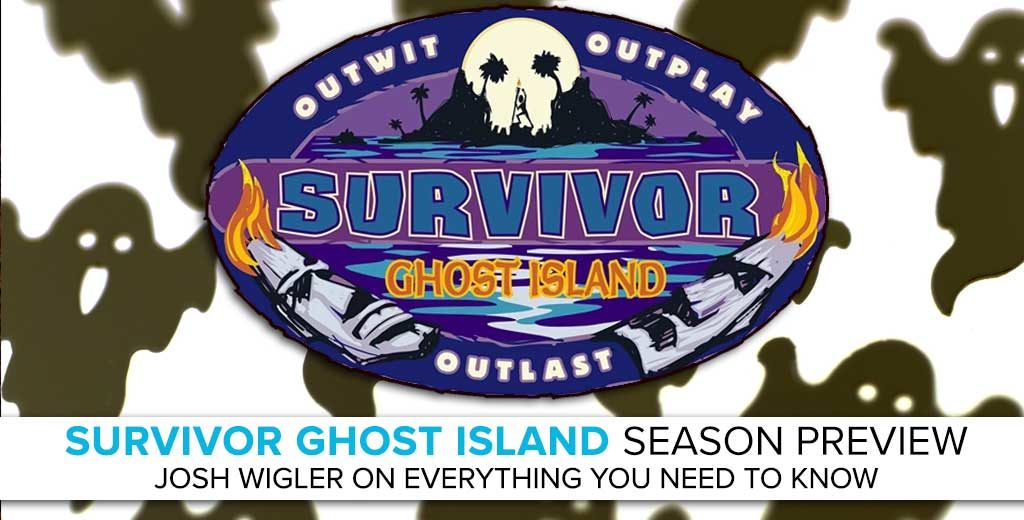 Josh Wigler Reveals Everything We Need to Know about Survivor: Ghost Island in a Special Season 36 Preview

Rob Cesternino is joined by Josh Wigler to report back on what he learned about Survivor: Ghost Island during his time out in Fiji last summer.

How Will Ghost Island Work?

Ghost Island will be very similar to Exile Island in that, players who will be sent to Ghost Island will sleep under the previous torch snuffers in a land of past Survivor blunders and it will be up to these castaways to reverse the curses of these mistakes. For the first episode, the winning tribe will send one member of the losing tribe to Ghost Island, making them immune from the first Tribal Council, but removing their power to vote. Authentic old relics from past Survivor seasons will be on Ghost Island, and Josh thinks most of these relics will simply on display, but there will still be many advantages. Executive producer Matt Van Wagenen described Ghost Island as “The Spooky Playground.”

The Impact of Advantageddon on Survivor: Ghost Island

Survivor: Ghost Island began filming soon after the finale of Survivor: Game Changers, so as such, the gameplay of Sarah Lacina, and more so, Advantageddon (when Cirie was voted out at final 6 with no votes against her), was on the mind of Josh and many of the castaways. Not to the surprise of those who hate him, host and executive producer Jeff Probst said that Advantageddon fulfilled the Survivor: Game Changers poster.

Josh thinks that the offers on Ghost Island will change from round-to-round. When he spoke to Jeff, Jeff said that it is very likely that some “shot-clock” advantages (as used in Survivor: Heroes v. Healers v. Hustlers), where an advantage must be used quickly, will be on Ghost Island. Josh also said that he was Ghost Zero, as he was the first person to spend a night on Ghost Island, and he apologized in advance for stinking up the place. Somehow, much to the chagrin of the producers, his request to sleep on Ghost Island the night before the game started was granted.

The Pressure for Superfans, Like Jeff Probst’s Winner Pick

Josh thinks that holding actual Survivor advantages that were previously displayed will have an impact on many of the superfans playing this season. When he brought up a few notable castaways, he first mentioned that many thought that model Chris Noble was a former athlete. Next, Wendell Holland, the winner pick of Jeff Probst himself, pointed out how he would make a fake idol with the things around him in his interview with Josh. Physical education teacher Brendan Shapiro, is the second-oldest at 41 years old, has been applying since Survivor: Marquesas (season 4), and Josh called him an alternate universe Hunter Ellis (castaway on Survivor: Marquesas). Additionally, 18-year old Michael Yerger, who is a real estate agent and model plans to say he is 23, like he does in the real world.

At the beginning of the game, each tribe will designate a tribe leader for the challenge, and this leader will pick an athlete and a smart person from this tribe. The athlete has to run an obstacle course and then the smart person has to solve a puzzle. As is the usual, tribes are given a pot, machete, basic fishing gear, and half the amount of rice players used to be given. At stake for the winning tribe, a shelter building kit, and for the losers, the loss of their fishing gear. The next wrinkle comes in the puzzle, when an hourglass will begin, and that signals the time the leader has to make a decision. The decision is that the tribe leader can forfeit the challenge during the puzzle to keep the fishing gear, but give the winning tribe eggs and a flint, in addition to the shelter building kit. Rob mentioned how excited he is to see the inter-tribe drama that will result from this challenge.

Voting Inside the Survivor God

Rob has said that he thinks the game is more open with two tribes of ten than three tribes of six and said that having two tribes is underrated. Josh thinks that having three tribes of six makes it easier to get to know the people, which Rob thinks is overrated because we do not need to know everyone. Rob thinks the limited rations will make a tribe more likely to keep a provider around before the merge. Lastly, Josh mentioned how the Tribal Council set this season is absurd, with jagged sticks, mythological masks, and the voting booth being the head of the Survivor god.