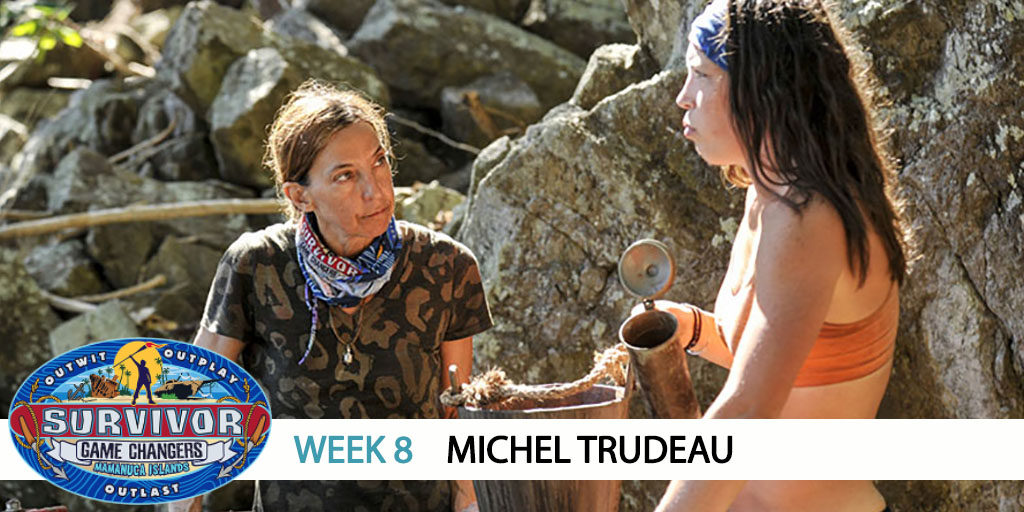 The Characters and Their Stories is a blog in which Michel Trudeau uses the edit to determine the themes of the season to try to find its long-term players. Each week, he will explores the overt signs as well as the more nuanced nods.

The Characters and Their Stories: Week 8–Reshuffling the Deck

Today, we are very lucky to have Jiffy Probe sitting in as we look back at the latest episode.  Thank you for doing this, Jiffy. Before we replay the episode, I want to go to the reward challenge because there were unusual things going on:  First, you showed Cirie completing the challenge even if it was over.  Is that something that happens from time to time and you just don’t show it or was this really unique?

So the episode begins and I really only have one question to ask. First we saw the fallout of the last Council: Debbie had the first confessional and she was quite happy with herself and the control her alliance had on the game.  It was set in concrete…”

In confessional, Zeke said he needed to stay with the majority even if he wasn’t part of it.  He got a sympathetic ear from Sarah who was willing to go after Andrea next but, as she told us, the lines were about to change again.

On day 25, we were at the reward challenge and another thing I found interesting was that no one picked Michaela.  We didn’t see the pecking order, which, by the way, is something I think you should always show.”

Okay, getting back to the episode, we had an inspirational moment with Cirie who vowed to push herself to do what she needed to do in order to win this game.  Then Sarah read the rules of her secret advantage: She would be allowed to steal someone’s vote and she vowed to use it properly.  We then joined the Blue team on their reward.  Instead of showing us those stunning mountain chains, we were subjected to more of Debbie’s love of Debbie. Brad then told us about one of his Survivor 101 rules: “Never take all your alliance on reward; leave some back at camp to keep tabs on the other side.”

Sierra was happy to see how things were going; Andrea was still mad at Zeke for flipping on her simply because he wasn’t the center of everyone’s attention.  Sierra was in the driver’s seat and she was all smiles.  Of course, back at camp, Sarah and Cirie were plotting against Sierra and Brad because they were running the show.  Cirie told Sarah that she didn’t have a chance to beat Sierra and Brad if she sat with them in the Final Three because everyone will say that they carried her to the end.  Cirie then told us that Sarah was facing her own “balance beam”; she had to cross that line but it was scary.  In response, Sarah told us that she didn’t want to repeat the same mistakes she made the first time.  In Cagayan she looked for the safest route, letting everyone else make the decisions.

On day 26, we saw the immunity challenge and while Andrea came close, Troyzan won it.

We heard Sierra in confessional saying she was happy that one of her power 6 had won immunity and that the smart thing to do would be to eliminate Andrea who was a huge threat in the game.

Getting back to my question, we returned to camp where Troyzan told us he loved that challenge.  Brad said they were all sick of Michaela who was eating all the time…

…He was tempted to vote her out but he knew that Andrea was a bigger threat.  Debbie was set on voting Michaela, but Brad immediately killed that idea because Andrea was simply too good.  Debbie told us she found Michaela to be highly annoying…

…but she was going along with Brad.  Huddling his alliance, Brad said they were taking out Andrea but telling everyone it was going to be Michaela, in case, like Troyzan said, she had an idol.

On cue, Sarah told us that the plan was hatched without consulting her so she knew she wasn’t high on their pecking order.  She went to Zeke to see if he wanted to make a move.  Since the power alliance was, in effect, ordering him to sit and be quiet, Zeke was all in for another move but he had no desire to work with Andrea.   He’d deal with it for at least one vote.

Andrea told Sarah that she wanted to work with her and Zeke to take out someone in the power alliance. Cleverly, Sarah said she was in that alliance so it could be good to be in with the enemy.  The two women hugged while we heard Andrea saying she was on board with that move.  She wouldn’t trust Zeke but she was willing to play with him.  Sierra and Sarah had a talk on the beach.  Sierra told us she was very close to Sarah and wanted to go to the end with her.  Sierra proposed a Final Three deal to Sarah with Debbie as their third.  Sarah said she loved that idea because it showed she wasn’t on the bottom of that alliance.   Meanwhile, Debbie had her own talk with Aubry, telling her that Michaela was going home.  In confessional, Debbie told us that she wanted the others to vote for Michaela in case Andrea pulled an idol.  Debbie told Aubry that Sarah didn’t trust her but that she did.  Debbie wanted to be able to use Aubry down the road and for that she needed to have her think they were friends.  She thought Aubry was buying it.

Aubry told Michaela and Andrea about her talk with Debbie saying she felt like telling Debbie to go (bleep) herself.  Aubry explained in confessional that she was now seeing the same Debbie she saw just before voting her out the first time.  When Aubry told Sarah about Debbie, Sarah felt betrayed.  Both agreed that they hated liars. Sarah said she didn’t want to be in the Final Three with Debbie anymore. She knew she’d be safe going with her but she wanted to make big moves so we were off to Tribal Council…

I’m getting to it… In Tribal Council, Cirie made her case saying she didn’t want to give up, Sarah said she didn’t want to leave anyone behind while Andrea said she felt particularly in danger.  Zeke named the power six alliance, saying they went into the woods together and decided who would go.  Gloating, Debbie said she was in that six and, through dialogue and respect, they came to a unanimous decision.

Andrea said she heard it was going to be Michaela but since everyone cheered when her blocks fell, she knew they were spreading false information.  Sarah said Survivor was about being on the right side of the numbers.  Troyzan explained that making it to six was the smart thing to do because anything could happen after that. His argument didn’t seem to impress the jury.  Zeke was hoping the deck would reshuffle before they reached six.  Michaela said she knew who was in charge and that they needed to make a move before it was too late.  When it was time to reveal the vote, Michaela took some pieces of coconut out of her bag, looking very confident.

While Andrea received 5 votes, Debbie was voted out leaving Sierra and Brad wondering what went wrong.

As the jury is slowly forming, let’s look at how the players might be perceived: