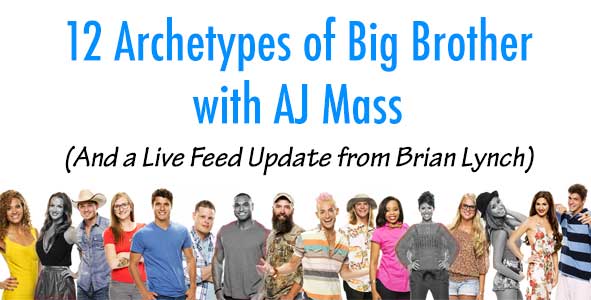 Note:  Rob talks with Brian Lynch about the latest news from the Big Brother Live Feeds starting at 1:34:00

Rob talks to ESPN’s A.J. Mass, author of the books How Fantasy Sports Explains the World: What Pujols and Peyton Can Teach Us About Wookiees and Wall Street and the latest release Yes, It’s Hot in Here: Adventures in the Weird, Woolly World of Sports Mascots, about this year’s 12 Big Brother archetypes and they do their yearly Big Brother U.S. Fantasy Draft of the final 12 players.

They discuss this year’s new twist, the Battle of the Block, and its effects on the game as well as this season’s players’ effect on how the twist worked out and how it could be tweaked to work better if it were to come into play again next season.

There is a quick run-down and explanation of the 12 ideal personalities A.J. says you should have in any fantasy league, or any group of 12 and he lists them in reverse order of the likelihood of the personality archetype’s winning, while categorizing the remaining 12 houseguests into their respective archetypes.

10. The Cheerleader (or sometimes in Big Brother, the “House Mom”) – Frankie

6. Part 2 or “Beta” of the Marriage of Convenience – Cody

1. Part 1 or “Alpha” of the Marriage of Convenience – Amber

After discussing why these people fit these archetypes, and how fitting a certain archetype doesn’t necessarily mean that a person will win the game, Rob and A.J. start their draft pick.

For more of A.J., follow him on twitter @AJMass for fantasy football information, questions, and baseball, as well as the work he does on ESPN.com and on PostShowRecaps.com.

LISTEN TO ALL OF AJ MASS’ PODCASTS ON RHAP

Special Thanks to Kayley Ashman for this episode recap.