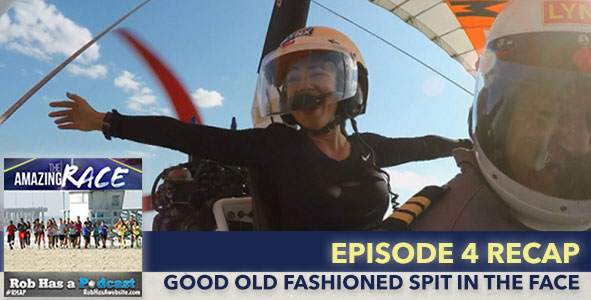 Join us every Friday after the CBS Eastern Broadcast!

Jess really doesn’t like that there is a U-Turn on the same leg as the non-elimination. Jess feels that the U-Turn had little or no consequences if no one gets eliminated. Jess thinks the way that this episode is edited, no one will be U-Turned and Jess thinks that the fact that the U-Turn is so close to the mat less people will want to use it because they know they are safe. Jess thinks the only reason someone would use it is because of spite.

Rob thought that the Texas boys were going to get U-Turned before they got to the board by another team who thought they were doing what they were told and the boys would be eliminated. Jess thinks that Team Texas must have been getting on everyone’s nerves because they were talking about Justin and Diana so much.

Jess thought that using the express pass on the roadblock was ridiculous especially because it looked like so much fun. Rob thought it looked exceptionally dangerous. This is the first time Jess has seen someone try to use the express pass in a strategic way mad Rob thinks that Phil’s warning of the U-Turn gave the teams a lot of time to come up with this strategy.

Jess thinks that the deal that the reporters made with Team Texas and Justin and Diana will come back to bit them real soon because they is going to come a moment when they have to pick a side and one team is going to be really pissed off. Jess does not think that they are being a puppet master.

For Jess either Chack Attack and Logan and Chris could be the team that could squeeze into fourth place. Jess feels like that Logan and Chris are fighting just the right amount and is enjoying it because we haven’t had a good fighting team in a while. Rob was surprised that Chack Attack put themselves in the narrative of U-Turning Justin and Diana.

Jess though that the croquet was the easier task but both tasks were not too difficult. Rob thought that it would take a while to pair and sand the giraffe. Compared to the other Africa legs we have seen, this one seemed very easy.

Jess does not think that the reporters will not get the express because they are too much competition, Jess thinks that Team Texas will give it to Tiffany and Christa because they are the least threatening team and they might not know how to use it. Jess also points out that Team Texas wanted to flirt with the other girl team so they will be more inclined to give it to them.

Special Thanks to Shane Gallagher for this week’s episode recap