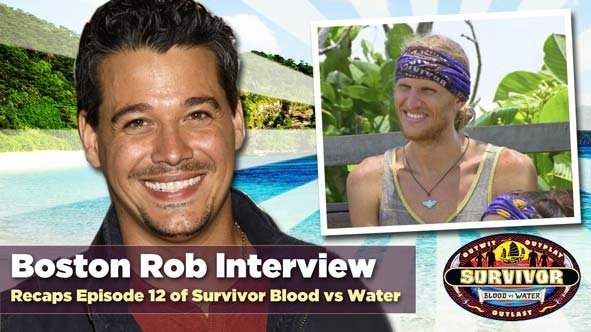 Rob Cesternino welcomes “The Rob that Doesn’t Suck” back to Rob Has a Podcast as “Boston Rob” Mariano gives his thoughts on Survivor Blood vs Water.

Boston Rob has been watching this season closely as his good friend Tyson Apostol has been in the driver’s seat over the past few weeks. Rob C. asks Boston Rob for his feelings about the concept of Survivor Blood vs Water and Boston Rob really likes the idea. Boston Rob feels like it adds so many layers to the game of Survivor.

Boston Rob also really enjoyed the tie-breaking rock pulling tribal council from this week’s episode. Rob spends a lot of time discussing Ciera and her strategy. Boston Rob has had an eye on her since she tricked Katie about not having the immunity idol a few weeks back. Boston Rob said that he would’ve voted her out after she confessed to doing that because it means that she is playing the game. Also, Boston Rob says he would’ve voted out Ciera last week over Hayden or Caleb for the same reasons.

Discussing the tie break vote, Rob C. wants to know if Boston Rob would’ve done things the same way that Tyson did. Boston Rob thinks that Tyson absolutely made the right move to pick the rocks and explains the odds in terms of poker. Since Boston Rob says that the only way to think is “How do I win the game?” he thinks that all the players who cast their votes for a tie were all thinking correctly.

Boston Rob thinks that Gervase is running too much this season and is hurting himself with the jury votes. Rob has also been impressed with the job that Monica is doing in the challenges. Rob also appreciated Caleb’s move to vote out Brad Culpepper early in the season and he thinks that players are becoming smarter.

Boston Rob answers a number of questions from the RHAP listeners on Facebook and gives “The Rob That Sucks” some much needed advice for being a Survivor parent. 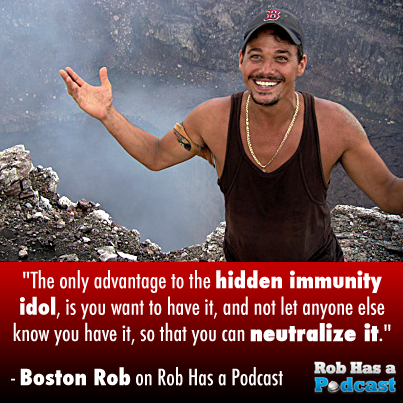 Nicole returns to the podcast for the first time since September 26, 2013.   Before listening to the voicemails, Rob and Nicole discuss why Nicole is such a big fan of the “Coconut Bandits”, The Ruffle Feathers vs Rustle Feathers vs Russell Feathers controversy and an alternative universe where the Survivor Amazon Final 6 participated in a rock draw to break a 3-3 stalemate.

Then Rob and Nicole listen to your voicemails to discuss a number of issues including what Ciera should have done with the clue for the idol, whether the new players should have voted for Tyson, whether the pre-merge people will sit on the stage at the finale, the behavior of the Blood vs Water jury and why Hayden Moss sees what we see (among other things).

Finally, Rob and Nicole discuss the Survivors on twitter, the return of Jeff Probst’s “out-of-context inappropriate comments” and what’s ahead in the coming week for RHAP.

Hover.com – Save 10% on a New Domain Registration with Promo code: ROB

RobHasAwebsite.com/BRrules – Own the “Boston Rob Playbook: Strategies for Life”

Watch this Week’s Edition of Survivor Know-It-Alls with Kim Spradlin: