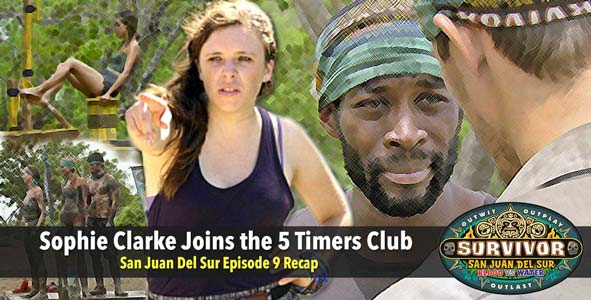 Rob Cesternino talks with the winner of Survivor South Pacific, Sophie Clarke about Survivor San Juan Del Sur Episode 9. Then later, Rob is joined by Curt clark to answer all of the RHAP voicemails.

In her 5th appearance on a Survivor episode recap Sophie tells us why she liked the move that Jon and Jaclyn made on the latest episode of Survivor.  Sophie talks about how the swing in the game was also a big boon to Reed’s game.

Sophie describes her idea to tell everybody in a future season about her problem with being blindsided which would result in her knowing when to play the hidden immunity idol.  Plus, Sophie tells us the difference between her Final 6 alliance from Survivor South Pacific and the alliance of 6 between Missy, Baylor, Jeremy, Natalie, Jon and Jaclyn.

In one of the scariest moments to ever happen on the podcast, Sophie lost a contact lens in her eye.  Rob had to stop for a few moments so Sophie could continue and not quit the show.

Sophie also answered questions from the RHAP listeners including her thoughts on Survivor Wine vs. Cheese, whether Sophie would return to Survivor, which player needs a visit from Dr. Oz, who Sophie supports for the hottest guy and girl of Survivor and what podcast she wants to do next on RHAP.

The tabulator, @CurtClark, answers a number of questions from the listeners of the podcast including:

@robcesternino Showing off my dexterity in Mexico! https://t.co/X1OyUcnArw via @vine