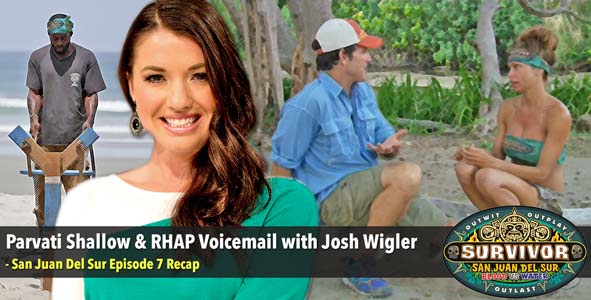 Rob Cesternino talks with the winner of Survivor Micronesia, Parvati Shallow and answers all of the RHAP voicemails and discusses the Survivor news with Josh Wigler

Rob welcomes Parvati back to the show to recap this week’s Survivor. Parvati lets Rob know how she’s been doing since moving to New York this fall.  Parvati also tells Rob about how this weekend is the big LA Fest where the Survivor soccer team is taking on the Bachelor and Amazing Race soccer team to support Grassroots Soccer

Rob and Parvati get in to talking about this season and Rob wants to know from Parvati if she got any vibe from Julie that she was going to quit in the pre-game.  Parvati also describes her own experiences with a quitter when Kathy Sleckman walked away from the game in Survivor: Fans vs Favorites.  Parvati goes on to discuss her memorable encounter with the Christie brothers from her pre-game interview, why she’s so high on Baylor and why she’s still extremely confused about what Val was doing.

Then Parvati answered a number of questions from the listeners of Rob Has a Podcast including what did Parvati think of the endurance challenge, will the gender imbalance be a problem for the women, has the game gotten easier and which of these Survivor San Juan Del Sur players have a strategy that will translate to the bedroom?

Rob Cesternino welcomes Josh Wigler back to the podcast to answer the listener voicemails.  This season Josh is doing exit interviews with the eliminated contestants for Parade.com.

Rob and Josh answer a number of the voicemail questions including:

Plus, Rob and Josh review the inappropriate out-of-context clips from Jeff Probst, the week in Survivor news and recap what the players are saying on social media.