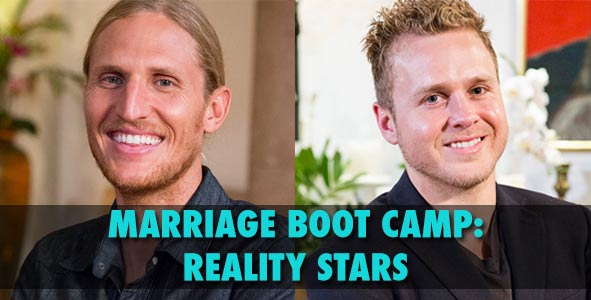 Rob Cesternino welcomes stars of Marriage Boot Camp, Tyson Apostol and Spencer Pratt with a special guest in the studio, Andy Denhart of RealityBlurred.com.  Andy Denhart is visiting LA to take part in the TCA panels going on this week.

Tyson and Spencer are part of the cast of the WETV’s Marriage Boot Camp: Reality Stars, taking part with their significant others, Rachel Foulger and Heidi Montag (respectively).  Tyson and Rachel are dealing with the fact that Tyson doesn’t want to get married and Rachel does.  Heidi and Spencer are dealing with Heidi’s desire to have a baby while Spencer does not.  The series premiered on Friday night with 5 Reality TV couples receiving counseling from the boot camp instructors, Jim & Elizabeth.

Tyson and Spencer will join Rob for more podcasts during the Marriage Boot Camp season to describe how their experience went.  We’ll find out if the Tyson wedding or the Spiedi bay will be happening in 2015 in just a few short weeks.