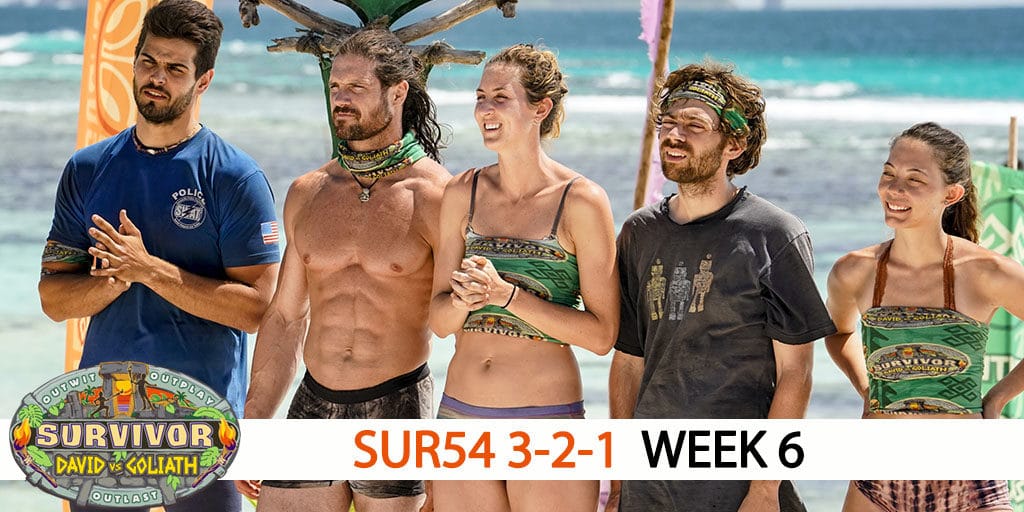 The merge seems to sneak up on us more often than not these days. This season especially has had such a fun pre-merge that it hasn’t felt like we’ve already lost seven players. The David vs Goliath cast has been so much fun every step of the way.. so while we sadly have lost some big characters in these early weeks, there are still plenty of gamers and characters left in the mix, leaving me continuously hopeful and excited.

Kara and Alec, last week’s bottom two, may have bluer skies ahead, having made it out of the swapped tribe alive. Alec may not have deserved to, given his boneheaded move on Natalia, but a couple of strong immunity challenge performances have allowed him a few more rounds. Alec isn’t this week’s “one to watch” but he easily could have been. Having very little trust between himself and Kara (and perhaps a shaky relationship with the other Goliaths) it’ll be interesting to see if he’ll find his way into a decent spot with the Davids or be shunned by both sides. As for Kara, I can’t wait to see what she can do next because I have high high hopes.

Nick had another solid week, despite a drop out of the top 3 for the first time in a few weeks. My gut instinct last week was “why the hell would you let Lyrsa go?” but I do see the logic in keeping a huge target in Angelina around while keeping Rockstar Mike happy. Elizabeth was also in last week’s top 3… and quite frankly I’m not sure I expect her to find her way there again anytime soon. I’m just worried hearing her talk about how bad her back pain is… I don’t want another Bi-style exit!

I’m very happy to welcome Gabby to the top 3 for the first time this season. She desperately needed to get through the last tribe without going to Tribal… mission accomplished! While there seemed to be some hope for her with Dr. Allison’s interest in taking out Dan, I worry it ultimately may have been Gabby to go home.

Gabby’s archetype on Survivor tends to thrive at this point in the game. Look at Aubry, Hannah, Laurel… they’re never the biggest physical threat or seen as the obvious pick to win the game. Just like those three woman, I think Gabby will be heavily involved in all strategic planning between now and the finale. Whether or not this can result in a win, it’s too early to tell but I won’t say no. We’re about to see Gabby’s game truly begin.

I’m not letting that little “next time on” get in the way of the great position I think Christian has heading into the merge. Christian has connections all across the board. Not only did he have all of the David tribe wanting to work with him before the swap, he’s developed connections with John and Dan that give him the most room to maneuver of anybody in the game. Even if a David ends up being the first one out post-merge, it’ll never be Christian.

The charmpocalyspe has worked well in the early stages of the game, and despite the fact that Christian is a huge threat if he can make it far in the game, there are still so many other more obvious “bigger threats” that will have to be dealt with before Christian’s number comes up.

To round out the all-David top 3, we have our resident Blerd. Davie has been quiet these past two weeks (while the Purple tribe has been losing), but I’m thinking back to the weeks prior to that.. where Davie was able to put himself in a great position by flipping Alec.

Things seemed a little hairy this past week with Elizabeth starting to break down and grow frustrated with Davie and Carl, but I don’t think that’s anything they can’t fix with some new faces around the island and more room to spread out. Elizabeth has always had a sense of David pride and given her lack of any Goliath connections, I have no reason to believe she’d turn on Davie.

This next tribal will be pretty important. If Davie can link back up with Christian and Gabby to make sure they’re all together and that Carl’s advantage gets used properly, the numbers majority will soon fall back in his favor just like it did last time, and he’ll have a wide open path to go far.

I hate to say it after having placed Angelina in my pre-season top 3, but I think I have to accept the fact that Angelina has not been a very good Survivor player. There have been glimpses throughout the season that perhaps she was doing well and making things happen, but the more we hear from people like Mike and Nick about how she isn’t coming across authentic, the more I lose faith in her.

Her acting performance during #JacketGate did a lot more harm than good, because it gave Nick a concrete situation to point to anytime during the remainder of the game to say “Do you remember this?? She cannot be trusted. She’s here to play and she needs to go.” I’m not sure if Angelina is in immediate danger, but if Nick gets his way (which I feel like he will), her time will be up sooner rather than later.

It’s incredible that we’ve come so far in Survivor to the point where a player heading into the merge with two idols in his pocket may be in the worst position of 13 players. The idol nullifier has huge potential to ruin Dan’s game in one fell swoop. Over the past few weeks, word of Dan having the one idol has spread. All it takes is one person going to Carl and saying “use the nullifier on Dan” and there’s nothing he can do to hide.

It’ll be a bummer to see the brochachos broken up so early, but especially with fellow Goliath, Allison, seemingly on board with Gabby to take out the Hot Cop, it’s just not looking great.

All season long, I’ve had my eye on John as the best player on the Goliath tribe. Unfortunately for him, the Goliaths don’t seem to be in the best position going into the merge. I think John and Kara are the only two Goliaths I have confidence in to make the most of a bad situation. They may be up in numbers, but they’ve never had any loyalty to each other.

Early on we heard of this great six person alliance… and then watched it crumble the very next week. Having lost Natalie, John is down a key piece in his game. Having Dan in the position he’s in with the idol ordeal, John may be down another key ally before he knows it. So I’m putting John here until we can get a better idea of how his post-merge game is going to look. He does have the connection to Christian, so he may find himself clinging to the aspiring spearfisher for dear life.