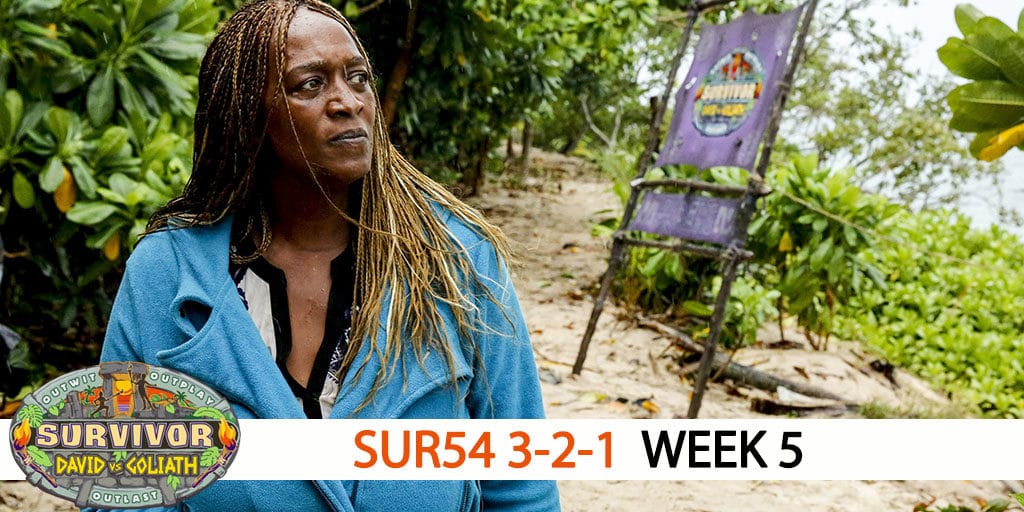 I’m devastated to be here with you guys for another week while knowing that we no longer will have the pleasure of watching Natalie Cole on our televisions this upcoming week.

What I will do is always cherish the memories of Natalie’s first Survivor appearance, and wait patiently for the time we will once again see her out on the island to lock up the million-dollar check she deserves.

Your Winner of Survivor season 40

So, let’s check in with the rest of our friends from last week’s 6: Davie and Carl looked just fine, relaxing in the majority of their tribe, thanks to our friend Alec. Alec’s position remained just about the same, though we got some more insight into how things might shake out at their next Tribal. Was it enough to knock him out of the bottom 2? Scroll down! *wink wink*

Angelina, Nick, and Lyrsa all had a big episode (having gone to tribal). Jackets and eggs aside, Angelina and Nick don’t have a whole lot to complain about. Looking ahead, things might get a little rough for Angelina if Mike is indeed losing trust in her, like the preview would suggest.

Meanwhile, Lyrsa should be throwing herself the party of a lifetime. If the third Goliath on her tribe were anybody but Natalie, Lyrsa more than likely goes home in that spot. A little bit of luck and a level head while Natalie continued to rub everybody the wrong way bought Lyrsa at least three more days in the game (and likely even more, given the even distribution of Davids and Goliaths after that vote).

I didn’t think it would happen again, but this week we saw another case of Goliath turning on Goliath. So before I go giving Nick all the credit, let’s make sure we remember how much Mike, Angelina, and the entire Goliath tribe was exhausted over living with Natalie.

Nick, by putting in the work with Mike, made his fellow Rockstar feel entirely comfortable enough in risking the Goliath numbers to keep him and Lyrsa both in the game. Nick remained as calm and cool during #JacketGate as I could’ve asked, given the person he was arguing with.

Going forward, the Goliaths are looking really shaky and I think we’re close to seeing a David takeover. If that is the case, we may be in for a role reversal where Nick holds the power and Mike sticks to him instead of Nick clinging to Mike to stay in the game.

I wasn’t able to find a spot in last week’s top 3 for Elizabeth, but I have to throw her some credit now that I see an open spot. Last week, Elizabeth and Davie got their way when Alec voted out Natalia. Elizabeth now finds herself in the David majority and she’ll have a big say in whoever goes home next.

Elizabeth got a big win this week when her #1 ally Lyrsa survived to see another day. Now that Lyrsa has a fighting shot to make the merge, that’s just another number for Elizabeth that will be in her pocket when they link back up. Elizabeth is a pretty interesting character. I feel like if you squint hard enough, there’s some Debbie Wanner upside to Elizabeth. Of course, that isn’t so much of a winner upside… but we just lost our top source of entertainment for the season last week. So come through, Elizabeth!

Call me Stephen Fishbach, because I’m going off the rails here and throwing a non-player a fishy… well, a spot in the top 3. This week was heavily focused on two things: Natalie Cole, and the storm. #JacketGate does not happen without this storm and the many storms earlier this season, which have caused Angelina to go after those jackets as hard as she did.

This episode wasn’t too focused on the gameplay of some of our rising Survivor stars, so I’m giving a shoutout to the winds and the rain that have already claimed a victim in this season… could very likely claim another… and led to one of the most absurd Tribal Councils in recent Survivor history.

Not much has changed since last week on the Orange tribe. After securing an immunity win, we didn’t get the chance to see which way the Davids would have voted between Alec and Kara, so as a result… we have a bit of a boring week down here on the bottom two. I just don’t see anybody in more obviously worse positions on the other tribes than I do with Alec and Kara.

Elizabeth sounded like she was concerned about Kara, because Alec will need the Davids more as the game moves on, after betraying his Goliaths. So if Elizabeth gets her way, perhaps Alec will live to see another day, but I feel like there’s more to Kara’s story.

Last week I thought that Kara would be able to work her way in with the Davids because of her connection to Elizabeth, and Alec’s proven untrustworthiness. Unfortunately, this week we heard from Elizabeth that she is in fact thinking Kara needs to go first, because Kara is going to want to go back to her Goliaths while Alec may need a new team.

Kara just needs to get through another round or two before another swap or a merge can help get her back on her feet. If she can get through this tribe, I think she’s capable of going the distance.

So far this season, everyone I’ve placed in this spot of being “one to watch” has been a player I’ve felt may be on the rise. This week, I’m using the term a little more literally. Dan is someone we straight up just need to watch. We have to keep an eye on him. Having found a second idol, things could go a variety of ways for the Hot Cop. We know about Carl’s idol nullifier, so that could be a huge factor in how things shake out around the merge if they both make it there.

Dan also seems to have a problem where he gives out more information than he should. Idols should be kept a secret from as many people for as long as possible, but that’s not the case here. If word gets out about Dan having not just one but TWO idols, he’s screwed. Looking ahead, it sounds like Allison wants to make something happen with Gabby to potentially turn on Dan? I don’t know that I’ve seen enough from Allison to be confident she’ll be able to pull that off, but again… there’s a lot of reasons we need to be watching Dan right now.