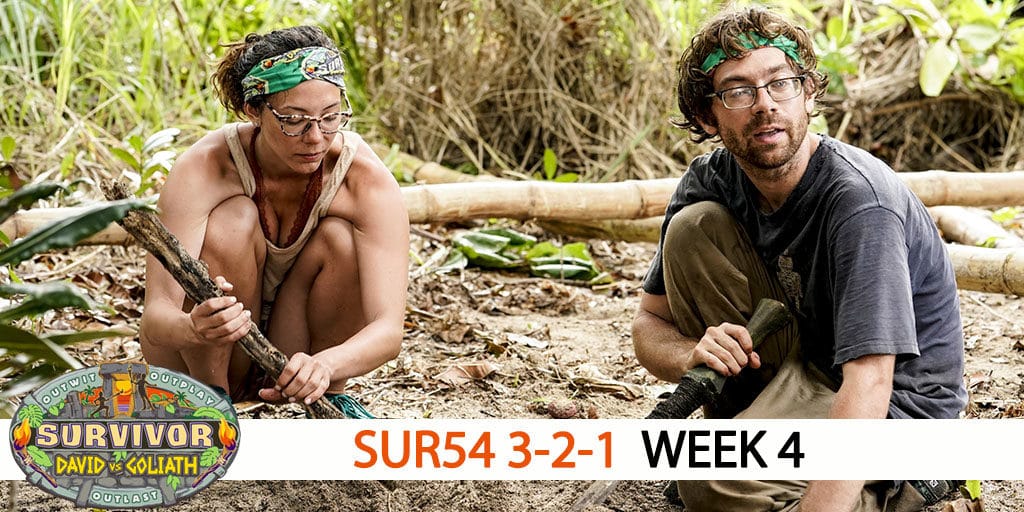 I couldn’t be happier to report that my previous concerns of a tribe swap ruining everything good this season had going.. were in fact nothing to worry about! This cast is good and they’ve delivered week after week. A med-evac and a quit both in the first four weeks, and I’m still enjoying this season far more than I anticipated.

Checking in with last week’s six: right off the bat of course I have to pat (cusack) myself on the back for having not just one eliminated player in last week’s bottom two…. but BOTH of them. I really didn’t think Bi’s injury was going to result in a quit; my guess was leaning more in the direction of a med-evac, but nevertheless, she’s gone.

As for Natalia, everything we saw in the first three weeks was enough to know that she wasn’t long for the game. At most, she could’ve had some Abi-Maria goatential upside. To see her own ally turn on her because she was that impossible to work with was not surprising, but I will say that her exit from the game was amazing and more than enough to get me on board with her returning to play again.

The others: John, Christian, Nick, and Mike all had pretty good weeks. While some of them may have been bumped out this week to make room for a few others, they’re all still looking pretty good.

In the minority of a new tribe with an idol on his side and gets through tribal without having to play that idol… while the other alliance turns on itself? Big win for Davie.

Davie put in work with Alec as soon as their new tribe formed. With that connection in place, he then ensured that the women trusted him, turning on Elizabeth in what seemed like the most reasonable move (it’s me or you… I’m going to make sure it’s you) and told Kara/Natalia who Elizabeth planned on targeting.

The entire time, nothing got back to Elizabeth which meant their votes were still able to come together and along with Alec’s… the Davids gained control of the tribe. Idol in tow, the numbers back on his side… Davie has risen to a prime position in the game.

Angelina just missed the cut for last week’s top 3, but I told myself that if she had a good next episode I would make sure there’s room for her up here. And as you can see, I’m happy with what I saw.

Angelina was swapped onto the weakest looking tribe by far, and by keeping herself and her tribemates calm, cool, and collected, she led them to an unlikely immunity win.

Angelina showed us last week that she’s able to call her shot and get the job done, and I think she’ll be a key player this season. Looking ahead, she’s in the Goliath majority at her tribe and it seems incredibly unlikely that any of this group would turn on her.

The work Nick put in with Mike at his new camp has earned him a spot in the top 3 for the second consecutive week. Having swapped into a minority on his new tribe, he immediately was put at a 50% chance to go home next. By linking up with one of the three Goliaths and forming another named alliance (maybe annoying, but definitely effective), Nick has all but ensured that Lyrsa would go home next.

To look even farther down the line, if this tribe lost the next two immunity challenges… you have to think Mike would strongly consider asking Angelina to keep Nick around and cut Natalie lose before the next swap/merge. Mike and Natalie have never been best buds.

As long as Nick can keep working the southern charm and not do anything to rub Angelina or Natalie Napalm the wrong way, I think he’ll find a way through this less-than-ideal swap.

I haven’t seen Lyrsa in at least two weeks, so this ranking is going with the assumption that she is still in fact on the island. (I kid, the editing this season has been leaps and bounds better than Ghost Island. It’s hard to train my brain to not focus so much on a player’s purple-ness after last season.)

Lyrsa and Nick are the minority over on the new Jabeni tribe. (Yes, I had to use Google to find that tribe name.) Nick has been off making connections, and Lyrsa as far as we know.. has not. This tribe won this week (I promise I ate the rock, guys) but can it happen again? If it doesn’t, I’m not sure how Lyrsa stays in the game.

The player that caused this week’s episode to be so amazing did so in exchange for his good positioning within his tribe. What a selfless act, Alec! Thank you!

For entertainment, I love this guy and can’t thank him enough for creating such a golden moment at Tribal Council. For gameplay, I can’t imagine a worse move.

Natalia was clearly getting on Alec’s nerves, but no way should you let that be enough to give the David’s the majority (with Carl set to be joining their tribe). I don’t care how good Davie or Elizabeth made him feel… you just can’t do that.

The Davids don’t have any use for Alec, and I think if they lose again, Kara’s connection to Elizabeth could be enough to keep her around. It’ll be a simple pitch from Kara… “You’ve seen what Alec is willing to do to his allies. I stayed loyal.”

Carl was one of my pre-season top 3 picks, but he hasn’t reappeared on the 3-2-1 since then. His game didn’t get off to a great start having lost his closest ally Jessica at the first Tribal Council he attended.. but I felt like if he could regain his footing he could still be a dangerous under-the-radar player.

Looking ahead, Carl is heading back to a tribe with two former Davids, and the three of them will have the majority. Of course, Carl returns to the game with a new advantage by his side. He may not need it right away, but once things start to get hairy, that idol nullifier should come in handy.