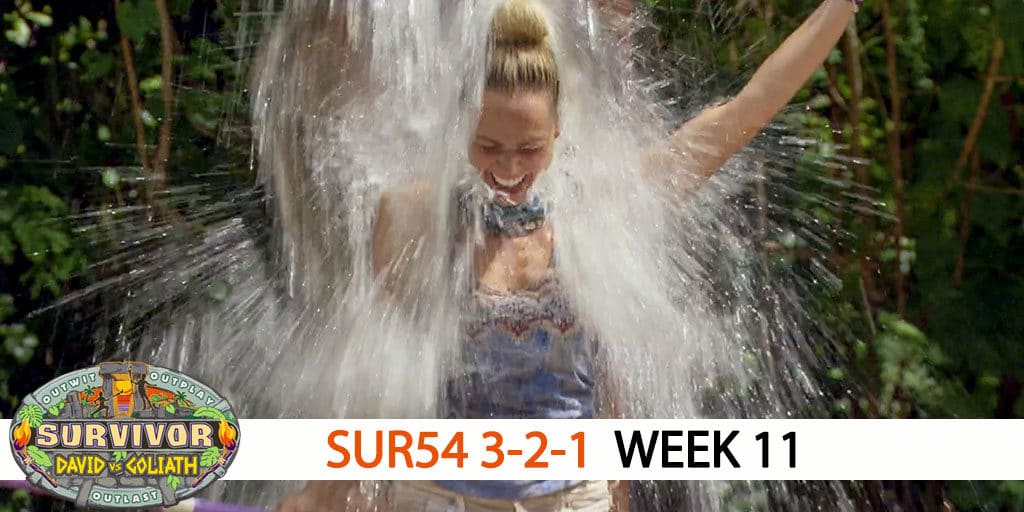 “The state of everybody’s game right now depends heavily on Gabby. She’s the middle-woman between the two sides and whichever way she decides to go should have the numbers.” – me, last week

Gabby’s boot shook me. I really didn’t see it coming. I made my case last week and on Twitter about how if Gabby were to take a shot at Christian, nobody should be saying anything if you were also somebody who got on Laurel’s case last season. As it turns out, taking down big threats actually isn’t as easy as everybody chose to make it sound! This last Tribal Council was on day 32 of 39. Imagine spending a month with Christian, knowing full well that you can’t take him to the end, and it’s day 32… only six days left to get rid of him. I can only imagine the pressure Gabby was feeling to pull the trigger and I’m glad she went for it.

With Gabby out of the picture, it’s time to re-evaluate where we are in the game. I wouldn’t have expected Nick to be so upset with Christian to the point where he declared Mason-Dixon as dead to him. I wouldn’t have expected Nick and Davie to be okay with turning on another David number when they had already just lost one. It’s easy to say that Christian is the obvious next target and if he doesn’t win immunity he’s gone next, but I’m not sure it’ll be that straightforward… not with this group. There’s four Goliaths, three Davids, a final 4 between two Davids and two Goliaths, at least one idol in the game (possibly two if they re-hide Christian’s), and only a few days left before three of these players will be sitting at the final Tribal Council pleading to the jury. Should be fun!

I continue scratching my head trying to figure out where Nick’s place in this game is. Nick was fuming after the Carl vote, frustrated they had worked so hard to get the numbers on the Davids’ side just for Christian and Gabby to ruin all of his hard work. So… with the numbers evened back up 4–4, Nick went all-in on the plan to blindside Christian and secured a back-up plan to put votes on Gabby. Wait.. what? I’m all in on playing petty, but I’m amazed Nick wanted to see Christian or Gabby go home before Kara or Alison.

We’ve still yet to see anybody coming after Nick directly, but with only seven players left it’s bound to happen soon. The idol in his pocket continues to keep him afloat here in the top 3, but I really have no idea how far Nick will go as we sprint towards the end. If he continues to play seeking vengeance, a second place finish wouldn’t surprise me.

Kara had another relatively quiet week but I think she’s still on the right path. I have to point out an observation that I surely could be reading too much into: during the immunity challenge, remember when Angelina was giving advice to Nick and it didn’t work out at all? And then she was like “oooh.. Kara’s low….” and then it turned out Kara won the challenge. She’s been laying low in the game and I think it remains effective. At the very least, it won her this challenge!

Going into the next vote, she’ll be covered by Alison and Mike at her side, a connection with Davie, and you have to imagine she’s not at the top of Angelina’s target list with Alison and Christian still in the game. And hey, now we know she can hang in there to pull out an immunity win, so I’ll guess that isn’t the last time she’ll wear the necklace down the home stretch.

It feels like a pretty similar story to last week with Mike White; the game has drifted away from him. This new final 4 formed by the reward winners is probably most beneficial to Mike because I do think Angelina, Nick, and Davie have no intentions of turning on him specifically. To be clear, Mike still isn’t a threat to win in my eyes. His placement here in the top 3 isn’t the easiest to justify, it’s just that this week’s blog feels all about “who isn’t in danger to go home.” Ultimately, I do see Mike taking one of those final 3 seats, so I think next week there should be some more to talk about before we close the book on Mike’s game for the season.

Votes landing on Alison are becoming as common as votes landing on Christian or Angelina. It’s become clear that Alison is considered a threat. Davie, Nick, Mike, and Angelina formed a final 4 on the last reward, and if that holds together even for one vote it’s Alison that needs to be worried (if not Christian.. but we’ll get to him). Angelina has wanted Alison gone for a few rounds now and this upcoming vote seems like a perfect opportunity.

The only hope I see for Alison is her connection with Mike, as I’m not sure he’ll want to see her go just yet. If she can keep Mike close with her and Kara and swing one more number onto their side (maybe Christian..?) they can take out a number from the Davids and march towards finale night together.

You’d have to think the curtains will close on the biggest target in the game eventually, right? I’m not sure how much longer this show can go on. I assume we can all agree that if Christian finds his way to the end of the game, he’ll win pretty handily, but how could they ever let him get there? I’ve heard a lot of people talk about how sometimes after you miss your shot on somebody, you’re inclined to move on and try for someone else. If that’s the case, perhaps the Goliaths decide they’d like to try taking Davie or Nick down while using Christian for his vote? Perhaps he’ll find an idol? Win immunity? I can’t help but feel like Christian will be there on finale night, but there’s no way I can justify him not landing in this week’s bottom 2 in the meantime.

Angelina finally got her way this week and I’m not sure any of us were prepared for it. Angelina and Mike’s votes to send Gabby home led the way after Christian’s idol was used. Going forward there is a Goliath majority, but Angelina has mostly disconnected herself from that group. She also has Nick and Davie who are in her new “final 4” with Mike.

I think Angelina is a great option to sit next to in the final 3. It’s hard to tell what the perception of her truly is out there, but compared to the other players Angelina hasn’t built up the most impressive resume. However, she has told us that she can be very persuasive… a force to be reckoned with… somebody who always gets her way. While that wasn’t the case during #JacketGate, she did get Dan’s idol… she did get more rice… and perhaps she will get the jury vote if she can make it that far.

I’m cheating on my own system here, but hey there’s one week left.. who cares? I figured anybody reading up to this point might’ve been wondering “WHERE IS DAVIE!???” so I didn’t want to get out of here without talking about him.

Davie deserves credit for his work last week in keeping Christian around. Unlike Christian (who at one point contemplated keeping Alec around for this very same reason) Davie pulled through and can now use Christian as a meat-shield for another week. The move should’ve landed him a top 3 spot, but as I mentioned earlier I’m really focused this week on who I think is in a safe spot going into this next vote. With Nick having an idol and Christian impossible to get out, I do think Devilish Davie may soon find himself in-Danger Davie.