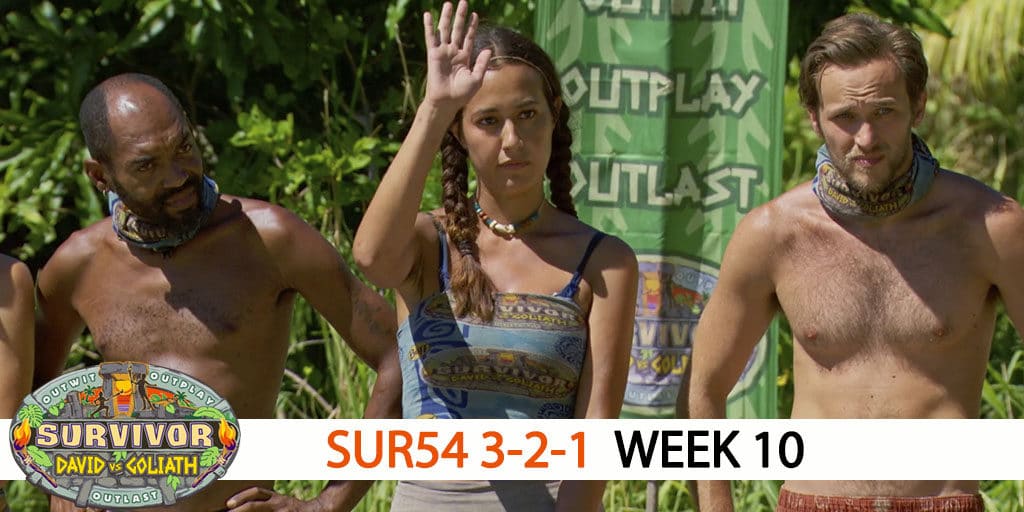 I should admit, The Godfather is one of the many movies I have yet to see. I’ve just never been a big movie guy. But after this episode, do I really need to go watch it? I can’t imagine there’s a better version than watching Carl’s two-hour performance playing the Survivor Godfather.

Alec made his way into Austin’s bottom 2 last week, (yeah yeah Austin, you’re a genius) and met his demise after failing to outlast Christian in a crucial immunity challenge. Not another regular Joey Amazing challenge beast, Alec proved himself a passionate, impressive game player. His drive to do well in the game was clear and his desire to keep going further and further was exactly what we want to see from our Survivor players and I loved every second of it. It’s disappointing Alec won’t be able to attend the reunion, but luckily for us Alec fans we’ll still be able to see him over on the jury and in Ponderosa videos for a few more weeks.

I’m sad to see Carl go out as well, and not just because he was my last remaining draft pick. It’s not like I was gaining any significant amounts of points along the way, but Carl was keeping me alive. These two episodes telling the story of Carl’s downfall was highly intriguing and well-done. He brought some great character moments to this season, but unfortunately for the Godfather this group is filled with some big players. Credit goes out to them (specifically Gabby and Christian) for pulling one over on a guy who thought he had nothing to worry about.

One of my main points in Kara’s favor is that the game is filled with bigger targets than her. Specifically I’ve mentioned Angelina and Christian as two shields that Kara should be able to hide behind. Add in Alison now who apparently has been dubbed “wonder woman” and don’t forget about Nick and Davie, who pulled out all of the big moves/advantages the past few weeks. Kara has everywhere to hide.

At these two Tribals, Kara went 1–and–1 in terms of getting her way. She and Alison didn’t see any real chance of the Davids changing their minds about voting Alec, so rather than showing an obvious division they wisely voted the same way. Losing Carl was obviously a win for Kara; despite all of the information he was spilling to her it was only a matter of time before he took out all of her allies, none of whom fit into his game plans.

The alliance Kara has with Alison is her key moving forward. Alison is the connecting piece between Kara and Gabby. Looking at the board, Kara could certainly use Gabby on her side to take down any of Davie, Nick, or Christian. Now that the numbers have evened back up 4–4 men–women, I’d say there’s a decent chance the woman come together (pending Angelina’s willingness) and possibly even head to finale night having taken out two more men along the way.

Gabby was able to get her way in both Tribal Councils. While the Alec boot seemed obvious, taking Carl out was undoubtedly her and Christian’s move. She vocalized feeling that Carl was the Godfather… the leader of the Davids… the shot-caller. Carl saw most of the other players as pawns in his game, Gabby very much included. She was always going to need to break the Carl-Davie-Nick trio open, and hey, she did it! Gabby’s vote is crucial in this next vote and having that kind of position with allies on both sides of the aisle lands her back in the top 3.

I can’t ignore the “next time on… Survivor” where we hear Gabby planning to take out Christian. Gut reaction is “wait…… what? Why??” Taking your number one ally out at final 8 and giving the numbers advantage back to the Goliaths sounds really bad. But is it actually bad for Gabby here?

If Gabby cuts Christian, her resume rises to the top. She’d do what so many have tried to do for weeks but failed. Cut lose your #1 ally and the game’s bigger threat, then stick together with Kara and Alison to knock out some more big threats. She’s doing exactly what last season you all begged Laurel to do with Dom and Wendell, so I don’t want to see anybody’s “what are you doing?!” takes if the move actually lands.

Nick may have lost an ally, but he did gain an idol. I have to award him extra points for only one person–Davie–knowing about his idol, which has to be the least number of people to know about an idol all season.

The state of everybody’s game right now depends heavily on Gabby. She’s the middle-woman between the two sides and whichever way she decides to go should have the numbers. By taking out Carl, one of Nick’s strongest numbers, Gabby appears to be moving farther away from him and Davie. Nick’s other relationships in the game are questionable. He aligned with Mike, but that connection seemingly disappeared. He’s always been Mason-Dixon strong with Christian, but Christian left him out in the cold on the last vote. The guy who was so high on Nick that he filled him in on the first attempted Christian vote-out, Alec… was just voted out.

So without solid alliances apart from Davie, that idol may come into play rather quickly. At this point in the game, final 8, simply being an intelligent player with an idol is enough to land a top 3 spot. So why Nick and not Christian? It essentially comes down to the target on Christian’s back being significantly bigger.

Looking like a tough spot for my guy Davie moving forward. I’ve hit on this in recent weeks but we haven’t seen any connections between Davie and the Goliaths.. or really even half of the Davids. We know he’s working with Nick and has been voting with Gabby and Christian.. but the game is opening up and now that Davie’s main ally Carl is out of the game, it’s tough to see Davie’s path to get to the end. Frankly, I would be shocked if he made it to finale night.

On the bright side, Nick has an idol in his pocket and these guys have shown they’re not afraid to play an idol at any point, so Nick saving Davie is a foreseeable outcome. But this late in the game, I can’t put all of my faith in that happening… so Davie lands down here. I will say, I’d never expect this guy to go down without a fight; even if the end of the road is near, I imagine there will be some chaos before his torch is snuffed.

Alison’s game as a whole has been a little sloppy lately. After flip-flopping on the Davids, she lost her closest ally Alec, just like Davie would go on to lose Carl. Here’s the thing… I don’t necessarily think Alison is on the immediate chopping block, because as I said in Kara’s entry I think there’s a possibility of the woman sticking together. At the very least, I think Gabby sticks by Alison’s side along with Kara and Mike.

What Alison can’t avoid is a potential idol play by Nick or Christian. If the idols weren’t in play, Nick or Christian would have this bottom 2 spot because it seems pretty clear that they’re in more vulnerable positions. But given the idols, I think Alison is a prime target to get the outlying Davids’ votes given we’ve never seen her have any real connection with them and she seems to be viewed as one of the biggest remaining threats.

For a guy who once seemed like an important player, Mike has nothing going on. I don’t buy that the vote to take out Carl was a tough decision for him. He and Carl had never once worked together and were on total opposite sides… so what was there to think about? I do think Mike’s vote could actually be important coming up however. We know he’s wanted Christian out for a while; if Gabby sets that plan in motion, perhaps Mike jumps back on top of things and assists getting the job done.

Either way, Mike seems more like a number tagging along with Kara and Alison than he seems like an actual contender. He should have no problem making finale night, but where he goes from there I’m not sure of. At this point, why not just bring him to the final 3? Nobody’s giving the successful Hollywood writer a check for a million dollars if they can help it, nor should they be worried about him being a threat to their chances in a final immunity challenge. His game hasn’t been very clean nor flashy and I’m skeptical of what he’d point to on his “resume” to present to the jury if/when he gets a chance to do so.

So while I’ve essentially closed the book on the possibility of Mike winning, every vote is important this late in the game so it’ll be very important to watch out for him and see where his vote falls.