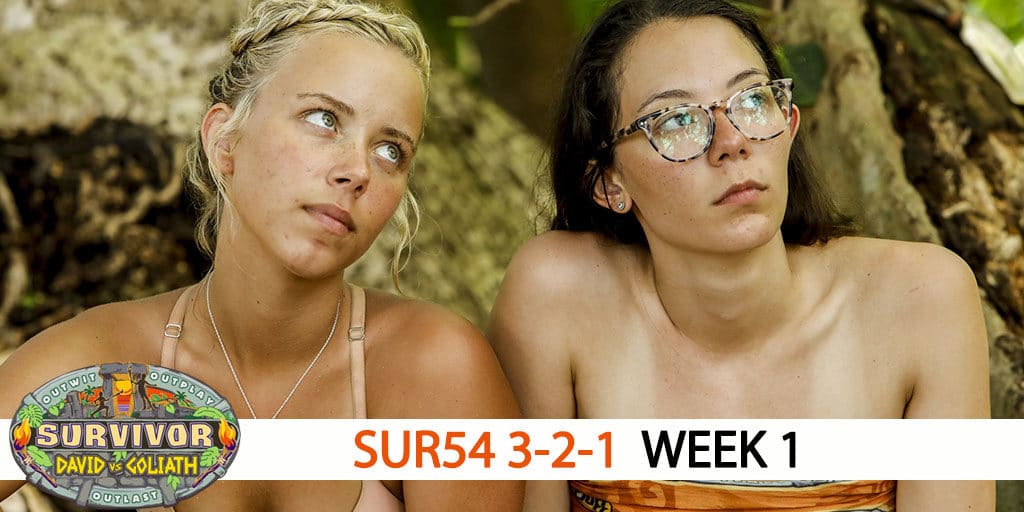 First off, let me say I’m so happy to hear that you guys are into the new format!

So that premiere… good, right? Nothing too groundbreaking, but perfectly solid stuff. We got to hear from everybody and we saw a lot of character development back at the camps (helped by the lack of a Tribal Council). We got to see the gameplay beginning to shape up as initial bonds and trust clusters were formed. Plus, no legacy advantage for the first time in what feels like forever in a season premiere. Maybe we’re getting somewhere!

We’ve got almost an entirely new lineup on this week’s 3-2-1. One player remained on the board, as you’ll see. How did everyone else do who dropped off? Last week’s top 3 of Angelina and Carl are both looking pretty good so far. The bottom 2 of Natalia and Pat is pretty split: Natalia looks to have some allies but the incoming war with Natalie could be dangerous, while we saw the unfortunate way Pat exited the game. I think Pat wasn’t long for this game and what we saw in the early parts of the episode felt like confirmation of that.

As for last week’s one to watch, Nick… he didn’t have the greatest premiere (especially after hearing Pat’s exit interviews) but it also wasn’t the worst. It does seem like he has a hole to dig himself out of, but I think he can rebound well with another few days to talk to people.

As always, I’d love to hear your thoughts! Reach out on twitter @mattliguori or leave a comment below!

Alison is going to be a big player in this game. She seems well positioned in her tribe and having stepped up early on for the first challenge, she showed her tribe she’s there to compete (despite the challenge’s outcome). I liked her confessional about how they don’t need to worry about the first vote just yet… but she’s happy that they have options. While other people on her tribe seem really into the idea of identifying their targets already and planting the seeds to take them out, Alison is letting the game play out and not making calls unnecessarily early, which is perfect for this stage in the game. It remains to be seen who calls the final shot as to who goes home.. but I think Alison will have a lot to do with the decision.

On paper, this seems like a great start for the Survivor Hot Cop. Dan immediately linked up with some strong women in Kara and Natalia to go searching for an idol, and having successfully found it, Dan now has an idol in his possession and two allies who are bonded to him through that information. Dan seems to be meshing well with his tribe, with some even gushing over how handsome he is. The Goliath tribe has some clear early targets if they wind up at tribal anytime soon, and I think Dan is as far up the totem pole as he could ask for.

We saw a lot of Jessica in this premiere. She let us know who she is and a lot about her life story, going through everything she and her Mom have had to deal with. We also heard a lot from her while Pat was leaving the game, talking about how much they were going to miss him and how much it sucks because nothing seems to be going their way. I think Jessica is going to be somewhat of a mascot for the David tribe, somebody we consistently have to remind us of the struggles of being a David… which makes sense given her age is a huge factor towards why she may have to fight harder in this game. We also saw Jessica making connections; she was mentioned as a part of the majority that would’ve allegedly been sending Nick home this week had they not lost Pat.

So far it doesn’t look like Natalie is integrating herself super well into the tribe. We know Natalia is not her biggest fan, despite how devastating the Natalie vs. Natalia fighting is for us at home. But it’s not totally clear how the rest of the tribe feels about her. I think we could simply be being set up for a Natalie vs Natalia war in the upcoming weeks. Then again, if Natalie isn’t helping out in challenges, isn’t helping out in camp, and really is just creepily staring at the rest of the tribe while they work for her, she may find herself with nobody to take a bullet for her at Tribal Council.

You never want to be the first person suspected of searching for idols. Mike admittedly shot himself in the foot by getting caught running around the island, gone missing while the rest of the tribe was gathered back at camp. You know what’s not a good sign? When there are two people at the bottom of the totem pole and the other person (Natalie) is the one who has to tell you that you may be in trouble. Mike would have to be my best guess on the first Goliath to be sent packing if he isn’t connecting with his tribe and they think he’s too big of a threat to keep around.

Gabby during the premiere showed a lot of promise. Having formed that bond with Christian, I think the two of them could find themselves possibly as swing votes if they have to go to tribal again? Gabby seems very level headed and very ready to play the game. We heard a lot from her as Pat was leaving and I think the sympathy she was showing towards him is actually a natural quality she has that could benefit her in the game. If Gabby is somebody her tribemates can lean on during those tough moments… she’s someone I’ll be keeping an eye on.