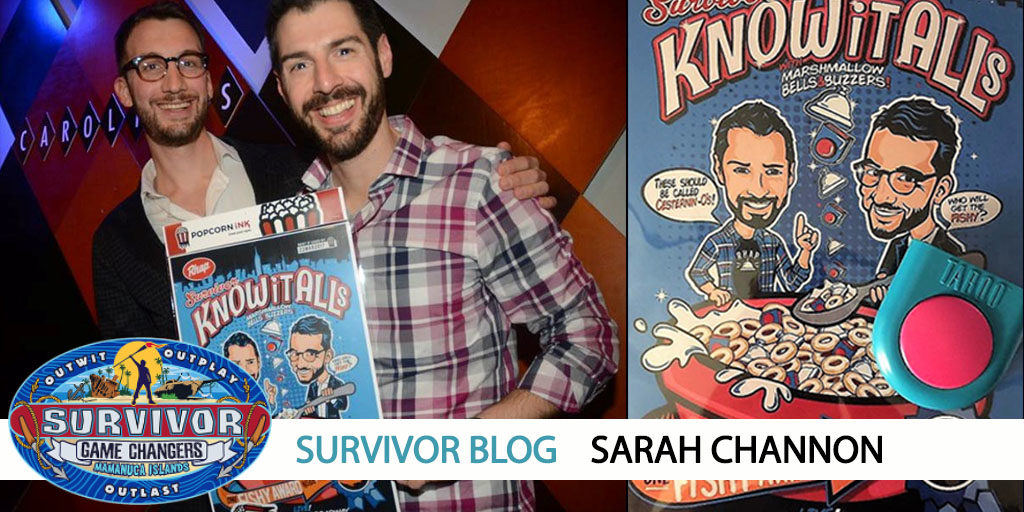 Out of the 300 and more RHAPpers who congregated in New York City this week, everybody made their own experience out of Know It Alls Live. There’s Adam Rida who came from Australia to spend a few days soaking in the experience. Or there’s R Filly who drove up from Maryland in time for dinner and drove right back down following the after party.

Or if you’re Jordan Parhar, you establish the institution of Podcast House, a mysterious den of podcasting, gaming, and social media abuse, now on its third straight incarnation. The festivities kicked off when Rob joined the Live Feed Correspondents in Podcast House for a live Big Brother Canada Update… only for Reddit to pick up on the concerning signs that Alex Kidwell was a victim of Podcast House bullying.

Nor was it going to be forgettable. One of the biggest events for the fandom was the union of Dom Harvey and Colin Stone, who after podcasting together for over five years, had finally met for the first time two weeks earlier. Know It Alls effectively became their honeymoon, and the assembled fanbase got to see them in one place at the traditional karaoke night on Tuesday. The pair did not disappoint:

If you think that set a ceiling for appropriate theming, it was broken at 3:30 p.m. the following day when Hunted crossed over with RHAP podcasters and fans for an Escape Room.

Command Center Myke Cole had never done a room before, but winner Lee Wilson designed them for a living—and took due care to inform everybody beforehand that this didn’t mean he’d be any good at solving one, unless the room had been created by somebody with a similar mindset. However, RHAP’s resident Escape Room enthusiast, Curt Clark, was not to be denied, and the team escaped in 50 minutes.

Podcast House, of course, spent the afternoon livestreaming Mario games (Taran Armstrong hoping to humiliate Alex Kidwell, as he did last year). Personally, I watched the minutes tick by in a saga of travel delays that meant I finally checked into my hotel with scarcely half an hour to spare before our dinner reservation.

As usual, I had planned to eat with a few friends before the show, but Podcast House had become a ten strong (Haley Strong!) bloc of diners and Josh Wigler has All The Friends, so the numbers had escalated to twenty-one. I was in dire need of a friendly face and a hug by dinner time, but I wasn’t sure I could handle a crowd that size.

Luckily, our Finnish Stalwart, Pia Virolainen, took me in hand. Sure enough, being in the company of good pizza and happy people worked wonders: it wasn’t long before I was lecturing Dom on his Supreme Court decisions and reviving a three week old Twitter joke by handing out Becky Lee buttons, all because Josh had rashly promised he’d wear one. (I left the extras on a table at the after party. I’ve no idea what happened to them, but if you picked one up, you’re the proud owner of a limited-15-piece-run collectible which becomes more limited every time somebody throws one in the trash. Thanks to Redmond for helping me with the design.)

Eventually, we left for Carolines (abandoning Alex Kidwell to struggle with an ATM machine) and the main event. I always say that watching Survivor in that room full of people is an amazing experience. But this time, the room was packed and, well, you know how the episode went… (If you don’t, spoilers ahoy!)

Apparently, we are Brad Culpepper fans. I have no idea what he said in the pre-Tribal Council scrambling, because it was drowned out by our laughter the moment he started counting on his fingers. We’re certainly Team Brad over Team Troyzan judging by how we cheered Mana’s comeback in the reward challenge… but we’re also Cirie fans, so we cheered even louder for Andrea’s comeback on the table maze to win immunity.

Even more evidently, we’re Sandra fans. When Sandra gave that confessional about being in control, a collective groan rose up from the audience, because as much as we debate a Winner’s Edit, we all know what a Hubris Edit looks like. I warned Colin Stone that if Sandra was voted out, the grieving crowd was going to take it out on him at the after party.

Although CBS had warned us of the twist in advance, there was much discussion during the advert breaks once it became clear that they weren’t going back to the same beach (and again when Tai found his idol.) One of our theories was that Tribal Council would devolve into open discussion—particularly with players like JT and Malcolm present—although Tai’s idol could inhibit that. The only thing we could reach a consensus on, however, was that Sandra was probably about to take the fall.

Obviously, things did not pan out as we expected, but we loved the huddles and whispers at Tribal Council. Then came the moment. The votes were being read, the idol had been successful, and all that remained was to find out who new Mana had voted for. Jeff pulled out the seventh vote, and we braced ourselves to say goodbye to Survivor’s Queen.

You know what? We are, quite definitively, Malcolm fans.

The Live Know It Alls audience reacts to the Red Wedding. #Survivor pic.twitter.com/TcYyfjG9n7

(To all those of you who responded to that tweet to express your disapproval of Mike Bloom’s reaction: Rest assured, Josh gave him a dramatic reading of your replies at the after party. Mike maintains that he knows a good TV moment when he sees one.)

In two months’ time, this Tribal Council will probably be no more than a random blip in the ride that was Game Changers, but this episode, this twist and this outcome is very likely to be debated on its own merits for years to come. We were divided on whether the twist was fair or if we would have preferred Sierra or Sandra to go in Malcolm’s stead… but in that first speechless reaction, 300 of us were able to turn to each other in open-mouthed shock. For my money, this was hands down the best episode for a Know It Alls Live yet.

I don’t envy Rob and Stephen for having to unpick it all in the immediate aftermath, but at least they had a punched up crowd to cheer and heckle their takes. Not to mention other Survivors on hand! Bret LaBelle, of course, raised our spirits with his rousing rendition of the Know It Alls theme, and later joined his after-the-fact showmance partner, Chris Hammons, on stage with their thoughts. Sophie Clarke is always good value at these events, but she was on fire with her hot takes and takedowns. Lee Wilson continued his crossover from Hunted, and Liz Markham and Billy Garcia rounded out the eclectic group on Carolines’ stage.

For this season, Andrea Boehlke has a rival commitment with the Pen Fan Forum, but once her show had finished, she brought Aubry Bracco and Nick Maiorano to the After Party—while Reed Kelly put in an appearance later.

I was delighted to meet Nick finally, since—unlike those wild podcasters—the weekly RHAP Survivor blogging team are a reclusive bunch, and my tally of those I’ve met now stands at two. (Obviously Josh Wigler was the first—isn’t he everyone’s?) That said, if you take into account everybody who’s written a Survivor blog for RHAP, we had quite the gathering: Lita Brillman, Jordan Kalish, and Zeke Smith were also in the house.

Ultimately, it didn’t matter who we were, we were all having the same conversation: the twist and the result. While a lot of time was spent debating how production should have executed the twist and how the players should have dealt with it, it was the emotions we needed to reconcile. (Only appropriate for a Survivor night!)

We had been braced for Sandra to go; losing Malcolm so unexpectedly cut us to the core. (It’s for the best that neither Sierra Dawn Thomas nor Tai were in attendance.) There was no pizza this time, but once again good company came through: We were all in the trenches that night and we bonded over it to the point where we rallied our own spirits. The Podcast Housemates even stopped bullying Alex Kidwell. (Though they did make him catch a separate cab back to Podcast House. Survivor can’t work miracles.)

Perhaps it was this excess of community spirit that took another Know It Alls Live tradition to the next level: the after after party at Podcast House. Last year, Alex Kidwell caught the blame, but if there’s any one culprit this year, they did a better job of covering their tracks. All my sources were willing to divulge was that, come 4:30 a.m., a beyond capacity house of 30 watched Chris Hammons’ and Bret LaBelle’s two-man show of Millennials vs Gen X.

In keeping with the theme of the week, we may never know exactly what happened or how… but perhaps the important thing is we’ll never forget it.

Please click on a thumbnail to start the slideshow.

Many thanks to Joshua Spaulding  for the feature image, which came from his Facebook album of the event and Rob’s Taboo Buzzer for the cereal box image.

More thanks to the rest of my People on the Street who came through with pictures, videos, quotes, and anecdotes: Mike Bloom, Lita Brillman, Curt Clark, Dom Harvey, Alex Kidwell, Jordan Parhar, Colin Stone, Pia Virolainen and Josh Wigler. This blog literally couldn’t exist without you.

Finally my heartfelt gratitude to every single one of you who talked and/or listened to me ramble in my state of giddy shock. You guys made my evening!