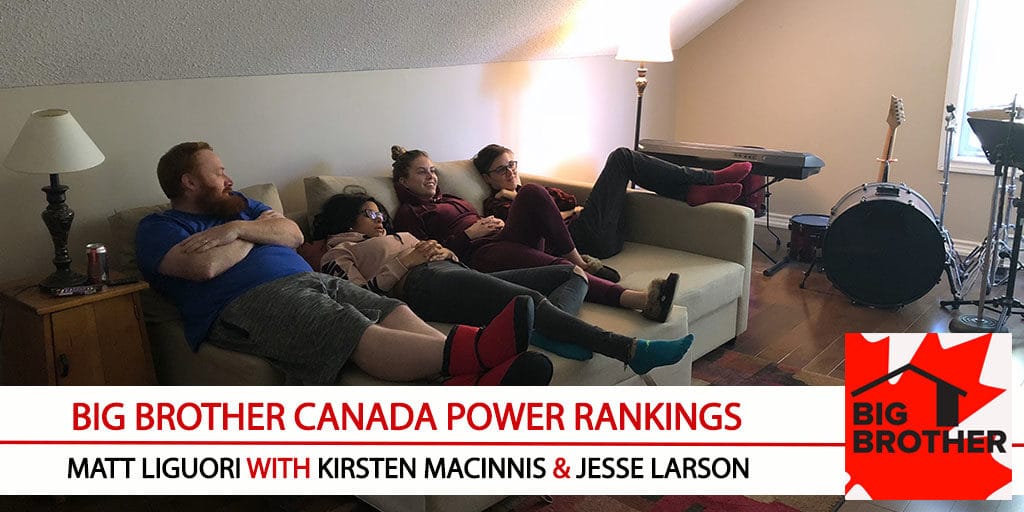 This has been another amazing season of Big Brother Canada. In my opinion, it was one of the series’ best casts and despite any complaints about the episodes, the edits, whatever… the cast brought it in every way and that’s all I really care about. I’d love to see so many of these players get a second shot. For that, we’d need more seasons of BBCAN, but I clearly already want that to happen. So shoutout to the players, shoutout to Arisa for killing it as always, and whatever the opposite of a shoutout is to Canada, for being really bad at voting for things. Whichever of these three take home the grand prize will be a deserving winner, which I love, and I’m just excited to see what happens.

I’m joined for this final week of BBCAN6 rankings by two great guests, my pal Kirsten MacInnis and a man who was once included in these rankings a couple of weeks ago (in the top spot), Jesse Larson! Very excited to get these two to give us their input before this Thursday’s finale. Follow everyone on Twitter: @kirstensaidwhat, @JesseBBCAN6, and @mattliguori, tweet us to let us know what you think and/or leave a comment below!

Note: We’re pretty sure that Will has in fact been evicted already, but we’ll share our thoughts on him anyways (some rankings were written before Arisa’s appearance on ‘ET Canada’).

Kaela’s path to get where she is has been full of highs and lows. Lately, she’s really painted herself into a corner where she’s promised people on their way out that she will cut Derek when the time comes. At this point, she could be in a lose-lose spot. If she takes Paras, she’ll need Derek’s vote and he said he won’t give it to her. If she takes Derek, the entire trio are looking at her like she’s dumb for taking Derek when she’s acknowledged multiple times that he will beat her. I do think Kaela’s best case scenario is to be brought to the end rather than winning her way there. She gets the top spot here because I think she’s a lock for final 2. Both Derek and Paras will bring her. And regardless of how the votes fall, the guarantee that she’ll be presenting her case to the jury and already likely has three votes (Ali, Johnny, and Liv) on her side gives her my #1 spot.

I’m not sure if I should be approaching this one with more of “why will Derek win” or “why will Kaela lose” because I think both sides hold valid reasons to explain a Derek win. Why will Derek win? His social game has been on point the entire season. He didn’t make any enemies along the way. Derek has won comps, kept himself and Kaela safe when needed, and never played in an underhanded way that would cause the jury to have bitter feelings. If Derek wins the final HoH, he’s taking Kaela. It’s going to be very close, and while I think Derek has a better chance at beating Kaela in a jury vote, Kaela has more paths to get there and that leaves Derek ranked #2.

Paras played a good game. Not the best game, but a good one. The playing dumb/little sister type was working for her, but similarly to Godfrey in BBCAN3, she may have done so well at playing dumb that nobody has come around to the idea that she was pretending. I’m so devastated that the way things have played out leave Paras in a nearly un-winnable situation. If she wins the final HoH, she needs to hope that winning the final 2 HoH comps is enough to turn a Johnny or Olivia vote in her favor, because otherwise she won’t win. If Paras is brought to the final 2, her chances aren’t terrible because Derek or Kaela may give her a vote out of bitterness. If Paras does get to final 2 and lose, I think the Ali vs. Kaela week is where she’ll ultimately have lost the game. Giving Ali and Olivia (and even Johnny) as much hope as she did when she ultimately kept Kaela really soured them on Paras as a player.

It seems Derek’s game is well respected by the jury, and he has proven himself in mental and physical competitions. Getting Will to drop in that final 5 veto looks great for him, and his jury management has been phenomenal – coming across as sincere and kind. At the same time, I don’t know that people feel he has played with agency in this game. Between Daela, I really think it comes down to who is brought to the end.

You can’t say Kaela only has competition prowress, because she stayed against Ali when she should have been dead to rights. She is a BEAST, and this final 4 veto win solidifies it. You can call her emotional, but keeping Derek is absolutely the right move for her right now. I think Kaela has a great shot of getting taken to the end or winning her own way there and I’ll be yass kweening in her general direction the entire time. The only thing that has me worried is her jury management – we love a sassy DR, but those goodbye messages should be a different story.

Paras has been a messy but entertaining player, and seeing things through her eyes has been a fun lens for the season. That being said, will her fellow players/the jury buy what she’s selling? She has shown incredible aptitude for playing dumb, and I don’t know if she has enough time to really turn that around through the live jury questioning. Again, if she is brought to the end, she could still manage a 4-3 win.

It’s crazy to me that he made it this far without just getting dragged to the end as a goat. I know it’s not 100% confirmed that he was voted out, but let’s face it, Will is the final 4 robbed g.oddess of BBCAN6. No need to look into his winner equity at this time.

I’m going to say first off, that these are unbiased rankings and I’m ranking on who has the greatest chance to win the game to the worst  – not who I like or dislike. – Jesse

I think that Derek has the best chance to win this game. If Kaela doesn’t vote to evict Derek this week (likely), he has a good shot at winning the Final HoH. I’m not sure if he would cut Kaela or not, but I hope by now he’s figured out that his best chance to win would be sitting beside anyone else in the final two. Kaela and Derek are a lot closer than people online seem to think. With Derek dropping the “I won’t speak to you if you cut me at the 3” spiel to Kaela, that might even be enough to secure a spot in the finals.

I think that Kaela is the most deserving to win the game. She has won many competitions, has been strategically the best out of the houseguests remaining and has been decent socially. She has a very good shot at the Final HoH! I’m not sure that she quite has the jury relationships to pull out a win vs. Derek, but beside anyone else she will be the clear winner in a final two scenario. I think it would be a 4-3 vote for either Kaela or Derek F2. I do believe that she could cut Derek in a final three scenario though.

At this point I don’t see Paras winning the final two against anyone but Will, and I believe that the odds of that final two pairing happening are extremely low. I think she has some great jury relationships (maybe the best out of the remaining contestants), but I don’t think that the jury can look past the number of competition wins that either Kaela or Derek have. If Kaela evicts Will this week and Paras wins the Final HoH, she would pick Derek for the finals. Another reason why Derek gets the slight rank advantage over Kaela.

After throwing the final five veto, Will doesn’t deserve $20, let alone 20 or 100K. But can he win?? I don’t see any possible scenario that Will could win the game. He wouldn’t beat Daela and I think that Paras will be able to position herself as the ‘mastermind’ when compared against Will. If he gets second place out of all of this, he needs to count his lucky stars, be smart with the prize money and look over his shoulder for any bad karma that may be coming his way.