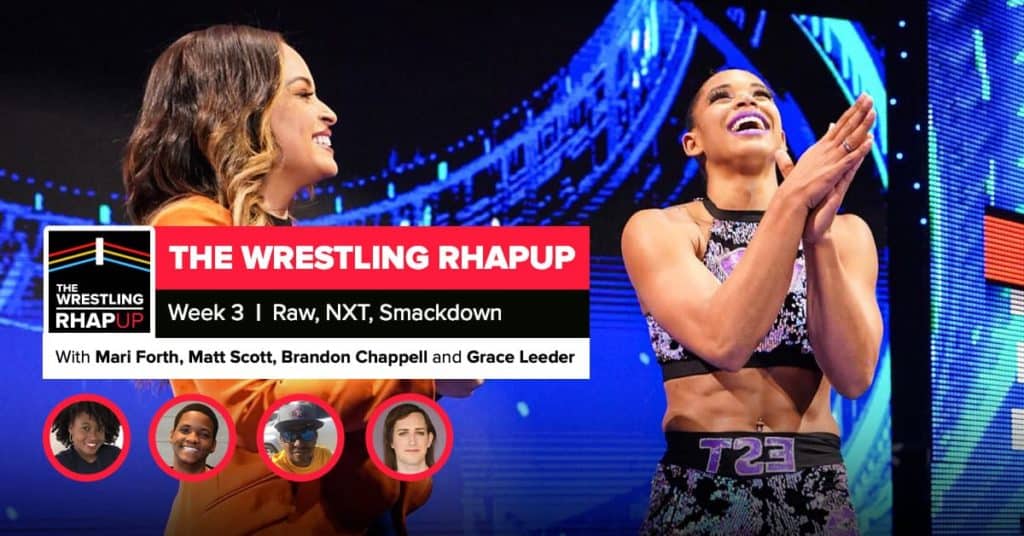 Making their way to the ring, podcast tag team titans Mari Forth and Matt Scott are ready to powerbomb and RHAPup the week’s highlights in wrestling! Tune into this week’s episode for highlights from World Wrestling Entertainment (WWE) – and other highlights shared from the listening community (#wrestlingrhapup or wrestling [at] robhasawebsite [dot] com).

This week, this wrestling duo is joined by two podcasters from the RHAP Class of 2020. Please welcome, Chappell (@Chappells_Show) and Grace Leeder (@hifromgrace) to the ring!

The fabulous freebirds of podcasting, Mari Forth and Matt Scott, are ready to rumble and RHAPup the week’s highlights in wrestling leading into the Royal Rumble pay-per-view! Tune into this week’s episode for a recap of all that’s led up to one of the signature annual events hosted by World Wrestling Entertainment (WWE) – as well as a proper discussion about All Elite Wrestling (AEW).

In this week’s episode, we discuss the Royal Rumble and make our predictions as WWE kicks off the Road to Wrestling. We also host a game of Create A RHAPstler, a competition with one another to decide who can come up with the best gimmick for the week’s special guest… or guests, in this case!

In this week’s episode, Mari and Matt return with guests Brandon Chappell (aka C-Dawg) and Grace Leeder! To contrast last week’s episode, Grace is a wrestling superfan, while Chappell grew up with WWE. Both are all-aboard as we go full steam ahead on the Road to Wrestlemania!

Videos discussed on this week’s podcast can be found on the YouTube playlist for this week’s episode: https://youtube.com/playlist?list=PLXkq_YuIh3bnyVWiC0cpX7kG8du2bppjE

Want to join the conversation around all of the promos, piledrivers, and peculiarity? Want to share clips from WWE and AEW for Mari and Matt to learn from? Let us know on Twitter by tagging Reality TV RHAPups (@rhapups) and using the hashtag #rhapup and #wrestlingrhapup!

Have you been keeping up with this week’s brawls? Who’s your favorite wrestler? Let us know on Twitter by tagging Reality TV RHAPups (@rhapups) and using the hashtag #rhapup!

If ya smell what The Rock is cooking, head to Twitter and follow these hosts @MattScottGW and @MariTalks2Much!

The Wrestling RHAPup | The Countdown Has Begun