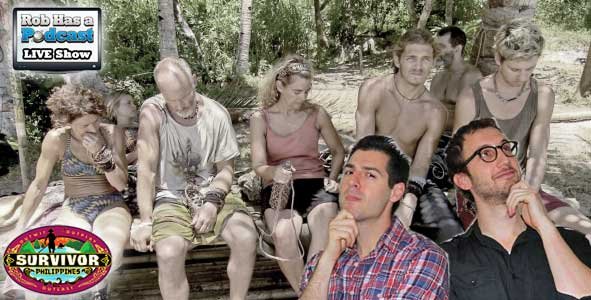 We start tonight’s episode with an imposter posing at Stephen Fishbach.  As it turns out the imposter is Survivor: China runner-up and Survivor: Heros vs Villians castaway (and Stephen’s girlfriend), Courtney Yates.  Once Stephen appears on camera, Courtney helps Stephen finish dressing and then he apologizes for missing last week (although recognizes his replacement was very attractive… i.e. Rob’s wife Nicole Cesternino).  Stephen then takes credit for bringing Rob back into the Survivor world by inviting him to the Survivor: Samoa finale.  Rob agrees to go with the theory.

The Know It Alls Talk Survivor

Rob turns the conversation to tonight’s episode, and expresses sadness about his favorite player, Jonathan Penner, being voted out. Rob did not enjoy this episode since the writing was on the wall from before the opening credits. Stephen was surprised that production telegraphed tonight’s vote from the beginning of the show.  Although there were suggestions to the contrary during tribal council, Rob felt Denise wasn’t getting enough screen time to be voted off and that it clear that Penner was going to be the victim tonight.

Stephen asks Rob if he is finding Lisa as annoying as Stephen is?  Stephen is sick of Lisa’s complaining and whining as well as how she took to complaining about voting off Penner… to Penner!  Rob agrees that Lisa has consistently been wishy-washy, acting like she is living out scenes from Hamlet.

Rob would like to know if Skupin and Lisa made the right choice in voting off Penner?  Stephen emphatically states “No!” Skupin and Lisa can’t win Final Tribal Council against any of Denise, Penner, or Malcolm but Stephen feels that going to the final three with Penner and Carter would have been a better bet.  Rob feels that they should have taken Malcolm out of the mix then there would have been a much more open path to the million dollars.  Rob adds that Skupin would have a better chance if there was another returning player. Stephen feels that there is a sentiment with the castaways that Penner has been the mastermind at camp, as evidenced in many exit interviews. True of not, this was creating a large target on his back.

Rob asks Stephen who should be targeted next. Stephen suggests they should go after Denise and Malcolm because Abi-Maria and Carter are obviously better choices to take to the Final Tribal Council.  Rob wonders how can that happen?  He does feel that Carter and Abi-Maria are walking dead because Skupin and Lisa are being loyal to their alliance. However, to have a shot at the million dollars, both Know It Alls believe Skupin and Lisa need to pivot.  As Rob puts it, “I have to screw the other two in my four person alliance before they screw me.”  Stephen feels that Malcolm and Denise are the best working couple and will switch first.

Rob wants to know Stephen’s opinion on how the castaways feel about their chances to beat Lisa at Final Tribal Council.  Stephen feels that, at first, people thought Lisa was nice and would get jury votes but she has begun to grate on people.  Rob points out that even Penner lost his control and exposed his frustration with Lisa this episode. Rob also feels that, if neither Skupin nor Lisa win at Final Tribal Council, this will be the episode that people will point to as where the big move should have been made.

Rob thought Penner’s exit, starting with yelling out “Denise!” while voting and continuing through his singing and skipping out the doorway, was epic.  Stephen could have done with less of Penner hamming it up while strolling down the path but accepts that Rob enjoys those moments. Rob points out to Stephen that Penner is a storyteller.  “Stay sunny side up and suck on an egg!”

Stephen asks Rob, between Skupin and Lisa, who will get more jury votes?  Rob points to his exit interviews, where the only juror of the four that liked Skupin was RC.  Jeff, Artis and Pete all spoke poorly of Skupin.  With the addition of Skupin being a returning player, Rob believes the votes would lean towards Lisa.  Stephen thinks that positives can be turned to negatives and negatives to positives at the Final Tribal Council.

Rob wonders if Abi-Maria’s fake immunity idol talk was effective. Stephen thought Abi-Maria antics were comical, over the top and not believable.

Rob also noticed a coincidence between how Jeff described his role in the game on RHAP and how Abi-Maria described Probst’s role in her confessional.  He wonders if she cleared her tactics with production first.  Stephen suggests that Abi-Maria could have been the originator of the concept before Probst used almost the same wording in his podcast on RHAP.

In tomorrow morning’s exit interview, Rob plans to will ask Penner about turning down the final 4 deal with Skupin and Lisa as well as press him on how his story changed from the previous episode to tonight’s tribal council.  Stephen believes Penner will have come up with many rationale in the “3 years” between the taping and now.  “Revisionist History!” Rob exclaims.

In the auction, Stephen felt Lisa was horrible to bid against Carter for the sandwiches immediately after he picked the rice and beans for the tribe.  Rob wants to know how Abi-Maria knew to save her money for something that could help her in the auction. He questions her ability to be so strategic. Stephen found it surprising but conceivable that she could figure this out.  Rob gives her credit for such a savy move. Neither of the Know It Alls could understand Skupin’s bidding strategy, buying the wine and cheese plate for $500.

What has to happen before Malcolm plays the idol? Rob thinks he could have played the idol last week just to be safe.  Stephen believes Malcolm probably has a better sense of the social game than we see on the episode but wonders if he could have given it to Denise as she seemed to be more of a target this week. Stephen also believes Malcolm is not in trouble next week.

Ian is also sad Penner is gone and believes they should have gotten rid of Denise.  While Ian believes Penner is only a top 20 survivor all time for strategy, he is top 5 for entertainment.  Ian thinks Skupin has a slim chance and doesn’t think the other castaways shouldn’t use the argument that Skupin is a returning player.

Rob wonders if the tribe should blindside Malcolm. Ian feels they need to target one of Malcolm and Denise. Rob is also trying to make sense of Skupin and Lisa statements where they said they could more easily beat Penner yet voted him out. Ian can’t make sense of it, either, other than loyalty.  Rob states, “ That will win scout badges but not a million dollars.”

Ian felt that buying the advantage for the immunity challenge was pretty much a guarantee to win immunity.  “With Abi-Maria’s small hands, light weight…. they might as well have made it a Portuguese speaking contest.”

Ian fears a bitter jury. He also feels RC could become the greatest juror of all time but needs more reactive facial expressions.

Rob and Ian start discussing plans for Big Brother Jeopardy.  Rob also mentions plans are underway for the second edition of Survivor Jeopardy but interested former survivors are concerned about beating Colton.  Are there any survivors out there up for the Colton challenge?

From some rapid final questions, Rob’s comments were:

Coming up Thursday on RHAP:

Caption Richard Hatch and win a Tundra Hat at Robhasawebsite.com/tundraCAPtion

You can also use the Tundra Hat coupon, RobHasAcoupon, to get 25% off when you order your own hat at: RobHasaTundraHat.com

You and also support RHAP by using the following link to shop for all your Christmas needs and receive great deals from Amazon: Robhasawebsite.com/amazon

Survivor: Amazon DVD Commentary, featuring winner Jenna Morasca and our own Rob Cesternino. Save 25% by ordering before December 7th:  Robhasawebsite.com/commentary