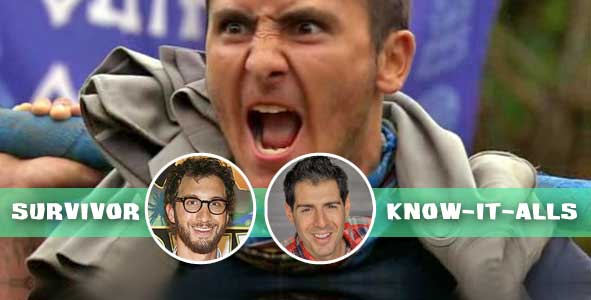 Watch out!! He has gone to the Hantz Zone!!

The Survivor Know-it-Alls, Rob Cesternino and Stephen Fishbach are back to discuss the second episode of Survivor: Caramoan. Although there weren’t as many fireworks as last week, Stephen was excited by this episode and was surprised to see the fans holding their own and holding his attention. Rob thought the first boot on the Fans tribe, Allie, was a little out of left field. Stephen says it was very confusing because Allie Pohevitz and Laura Alexander looked so similar, so Rob says it’s a gift from the Survivor gods that now they don’t have to distinguish the two. Rob talks about how he knew Shamar wasn’t leaving because of the editing–they kept showing clips of tribemates saying that he was obviously the one to go, which means it really won’t happen.

Stephen and Rob rave about Sherri Biethman, who seems to be playing a smart game like Boston Rob, keeping Shamar as her “Phillip.” She pushes her agenda without seeming bossy. Rob also thinks the Fans still needed to keep Shamar for the physical challenges. Rob and Stephen also talk about how Reynold Toepfer called out Shamar at camp after they lost the immunity challenge, which Rob thinks was a rookie move. The Know-it-Alls also talk about Reynold finding the immunity idol without the clue. Stephen wonders how he was able to stumble on the exact right tree. Rob says they are in the same place each year– the tree with the hole in it. Stephen says Reynold reminded him a bit of Kristina Kell from Redemption Island, because he seems to be getting a lot done but isn’t really thinking strategically.

Next they talk about how Reynold took out his idol at tribal council. Stephen thinks it was the right move because Laura called his bluff. Rob thinks he was a little too obvious in his bluff. They also discuss whether it was smart of Laura to bring this up at tribal council. Rob thought Sherri did a good job of reassuring her alliance by saying she was still going to vote for who she planned to. Stephen says the favorites definitely would have been more excited to see Shamar Thomas voted out, instead of Allie Pohevitz. Rob and Stephen agree that viewers should be happy from an entertainment perspective that Shamar stayed.

Rob and Stephen switch their discussion to the Favorites. They talk about how Brandon Hantz’s breakdown was pretty short-lived and over-hyped in the teaser last week. Stephen loves the alliance of Erik Reichenbach and Brandon. Rob and Stephen give Coach credit for keeping Brandon in line for so long on Survivor: South Pacific. Stephen doesn’t understand why Dawn got so upset with Brandon– he feels Brandon had every right to be upset. He thought it was over the top for Dawn to be crying.

Next they discuss Phillip Sheppard telling Brandon that he is middle management, and he is the CEO. Rob talks about how Boston Rob said something similar to Phillip on Redemption Island, but it’s not something Boston Rob would say to anyone else.

Stephen brings up whether it was responsible for casting to bring Brandon Hantz back due to his instability. Next they about how Malcolm is being portrayed on the show. Stephen thinks he is doing well regardless of how his edit has been this far. Rob wonders is Malcolm is giving Phillip the Russell Swan treatment.

Answering a question from a viewer, they discuss how Matt Bischoff and Michael Snow are in the best position, and made a good move this week in voting out Allie. They also talk about whether Reynold could have given Allie the idol, and if Sherri will continue to work with Shamar long-term. Stephen and Rob discuss Brenda’s lack of air time and what this might mean about how she will do on the show. They also talk about whether Jeff Probst was meddling too much when he said Laura was looking right at Reynold. Rob and Stephen don’t mind Jeff’s comments at tribal council.

Rob also provides the details on the upcoming RHAP original Web Series– “Reality Game Masters.” Rob will be bringing together the biggest strategists from Survivor and Big Brother to play the game Risk. Stephen will be one of the participants Rob said it will be like a mix of Celebrity Poker and a reality show, with confessionals.

There is a kickstarter to help support the program at www.realitygamemasters.com, where you can also see a trailer for the Web Series.

Tune in to Rob’s exit interview with Allie Pohevitz tomorrow as well as Rob’s podcast with Holly Hoffman from Survivor Nicaragua. Holly wrote the foreword for Phillip Sheppard’s book “The Costa Rica Job,” played with Brenda Lowe on Survivor, and many think should have been in Dawn’s place on this season of Survivor. Rob will find out how Holly thinks Brenda is doing and whether she really has a rivalry with Dawn.