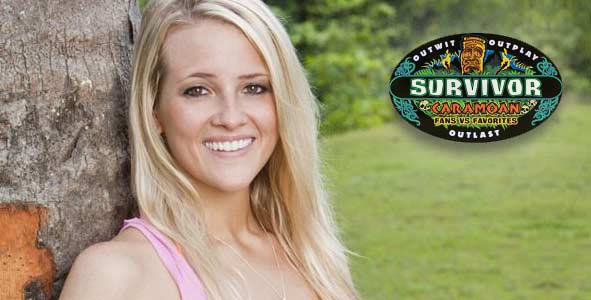 One of the cool kids: Allie Pohevitz

Allie Pohevitz was one of the four people in the young “cool kids” alliance in the Fans tribe on Survivor Caramoan, but she was voted out after the other six players outside of the group turned against them.  Allie joins Rob Cesternino to talk about her expereince in Survivor Caramoan on Rob Has a Podcast.

Rob wants to know why Allie was the target of the fans tribe as opposed to Hope Driskill or the other guys in her alliance.  Allie says that she was targeted because she knew the game so well.  Rob thought that it would be Shamar Thomas being the one to go home last night and wanted to know if Allie knew she was the one to go home.  Allie did know she was going home after a conversation with Sherri Biethman but Reynold was convinced that Matt Bischoff was going to vote with the “cool kids”.

Allie says that she and Reynold were just friends and were not in a romantic relationship on the island.  Rob asked if that was them snuggling in the episode last week and Allie says that it was – but they were just trying to stay warm.

Rob asked about Reynold Toepfer finding the hidden immunity idol and if Allie was aware that he had it.  Allie said that she did know and she was the one to tell him to bring it to tribal council.  Allie said that she tried to get Reynold to give her the idol but he didn’t do it because he was so sure that Matt was going to vote with them.

Rob wanted to know what was so bad about living with Shamar that caused Allie to dislike him so much.  Allie said that he didn’t do anything around the camp and he had a bad attitude. Allie also said that Shamar yelled at her in front of the tribe at the immunity challenge that caused Reynold to go off on him when they got back to camp.

Allie says that she would return to Survivor if asked, even if she were asked to play in a season with 19 other Shamars.  That’s a true Survivor fan!

RealityGamemasters.com – See the Trailer for the first ever RHAP original web series.