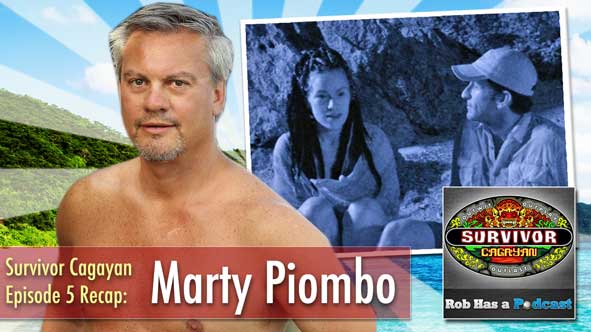 Talking with Marty Piombo about Episode 5 of Survivor Cagayan

On this week’s episode of the Thursday edition of Rob Has a Podcast, Rob has a jam packed show featuring Marty Piombo from Survivor Nicaragua, Jordan Kalish with “This Week in Survivor History” and Alex Forstenhausler to answer your voicemails and listen to the Survivors on social media.

Rob welcomes Marty back to the show for the fourth time.  Rob starts of by asking Marty to compare Lindey’s exit in Survivor 28 to the debacle with Naonka and Purple Kelly from Survivor Nicaragua.  Marty does not appreciate people quitting the game and doesn’t understand why Lindsey would leave.  Rob wonders what Lindsey must have said to make Jeff come on out in the middle of the night to remove her from the game.

Rob asks Marty to elaborate on the tense relationship he had with Jane during Survivor Nicaragua and how that compared to the feud between Trish and Lindsey in the game.  Marty said that most of his arguments came up at tribal council and most of the time spent at camp life was actually pretty civil.

Looking ahead to the merge, Rob asks Marty to discuss how a player can tell whether the tribe swap is going to hold or if the original tribe formation is going to be the dominant alliance after the merge.  Marty says that the players need to play the game by ear and feel out what is going to happen next.

Rob and Marty end up discussing the strategies used by Tony on this week’s episode to set up Jeremiah and come clean to his tribe about his lying.  Rob thinks that Tony’s game lack subtlety and that he doesn’t think he could ever win the game playing the way he has.  Marty thinks that many of Tony’s mistakes are typical of first time players.  Rob thinks Tony would be a great pick to be an all-star but thinks he would be exposed now that other players have seen his game.

Marty is also a big fan of Spencer and Rob reads to Marty from Spencer’s bio where Spencer says he would not only play like Marty but he also detests Jane.

Rob and Marty discuss a number of questions raised by the listeners of Rob Has a Podcast including:

Listen to Marty’s Previous Appearances on Rob Has a Podcast

Jordan Kalish returns to the podcast this week to discuss the HUGE Moments from This Week in Survivor History.  Jordan tells us about the time Jerri got voted out in Survivor Australia, When Jenna & Heidi got naked in Survivor: The Amazon and when Tyson flipped his vote in Survivor: Heroes vs Villains

Read All of Jordan’s moments highlighted in the Full Article

Alex Forstenhausler (@Aforstenhausler) joins Rob Cesternino to listen to your voicemails.  This week the callers ask a number of questions including:

Plus, Rob and Alex review the latest tweets from all the Survivors from Wednesday night.