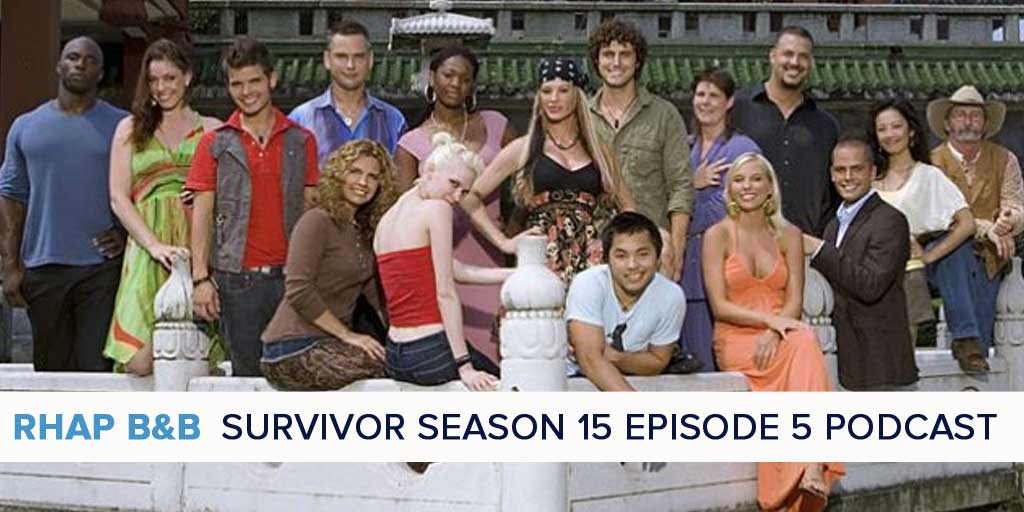 Welcome to the RHAP B&B! Mike Bloom and Liana Boraas welcome Ali Lasher to celebrate their 100th (we think) episode of the B&B and play a series of segments and games around the fifth episode of Survivor: China.
This week’s charity shoutouts are:
Detroit Justice Center
Brennan Center for Justice
ACLU
PLAY THE B&B DRINKING GAME:
Pick a group of rules and take a drink of your beverage of choice any time the following happens.
ALI’S RULES
-Someone makes fun of how stupid something is
-Pooya or Angela is mentioned
-A pun is made
-A game has a joke answer choice
-An innuendo is made
-Mike’s Survivor tattoo is mentioned
-Mike or Liana makes a weird confession about their childhood
-Mike or Liana is momentarily speechless at something the other one says
-Someone does a Survivor impersonation
LIANA’S RULES
-Mike laughs maniacally
-Mike makes a pun
-Ali says, “We been knew”
-Ali says something self-deprecating
-Someone tells a weird story
-Someone makes a genitalia joke
-Someone mentions the numbers 69 or 420
-Someone says a “white person phrase” (Okey dokey?, Bucko?, Son of a gun?, Hold your horses?, Ready Freddy, Let’s skedaddle, It has a bit of a kick to it ?, I’m just gonna sneak right past you?, Fancy meeting you here?, See you next year, Me three, and Uh oh spaghettios)
MIKE’S RULES
-Liana gets an answer right
-Mike gets an answer wrong
-Boston Rob is mentioned
-Ali says something self-deprecating
-Someone tells a weird story from their childhood
-The number 420 or 69 is mentioned
-Someone thirsts after a Survivor contestant
-Liana blames Mike for a game