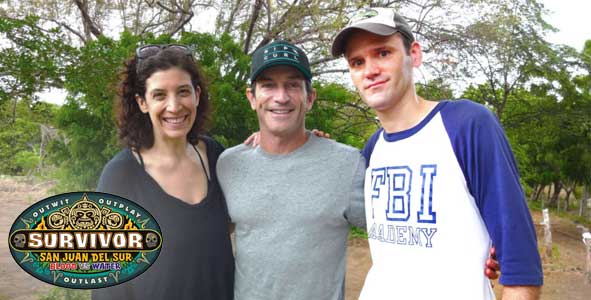 Rob Cesternino catches up with Dalton Ross who has just gotten back from Nicaragua after visiting the set of Survivor: San Juan Del Sur.  After discussing what Survivor fans can expect to see in Survivor 29, Rob and Dalton discuss the latest edition of Dalton’s All-Time Season Rankings.

While on location Dalton Ross had an opportunity to interview all of the Survivor 29 contestants and observe the first few days of filming of San Juan Del Sur.  While in Nicaragua, Dalton continued to host EW Morning Live from the set with Jessica Shaw.  While appearing on the show, Jeff Probst  discussed a number of interesting facts about the season, which is two people short after another pair did not get clearance from medical.  The biggest news is that Redemption Island will NOT be back in Survivor 29.  This was an about face from an interview that Jeff had given Dalton Ross on the day of the Survivor Cagayan finale.  Jeff and the production team had another twist in mind that they wanted to try so there will be no Redemption Island in Survivor 2014.

Dalton’s Ross Shines vs. Parvati and the Survivor Press Corps

The highlight of the trip to Survivor for Dalton Ross (outside of getting his hands on a Toña) is always to battle the other press members in one of the Survivor challenges.  This season Dalton really elevated his game and beat out Parvati Shallow (covering the new season for Survivor Live) in a head-to-head part of a competition.  Sadly, Dalton’s efforts were wasted due to the failures of his own teammates in the rest of the challenge.

After each season of Survivor, Dalton Ross places the new season into his pantheon of Survivor Rankings.  Dalton placed Survivor Cagayan at #4 overall behind Survivor Borneo and Survivor Micronesia (Tied at #1) and Survivor Heroes vs Villains (#3 Overall).  Rob thinks that might be a little too high for Survivor Cagayan and Rob would put it behind Pearl Islands and Amazon to make it #6 in Dalton’s all-time rankings.  Rob and Dalton also discuss the four season hot streak that Survivor has been on and whether Survivor: San Juan Del Sur can continue to keep the streak alive.

Vote for the Top 20 Survivor Players of All Time

Vote anytime for the Survivor All Time Top 20 Rankings at RobHasAWebsite.com/SurvivorTop20