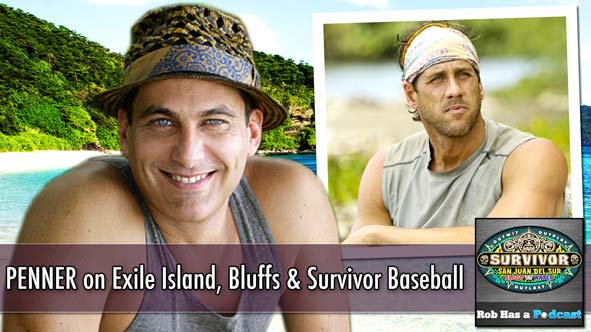 Rob Cesternino welcomes Jonathan Penner back to Rob Has a Podcast for his triumphant 5th episode recap.  Then later, Nicole Cesternino joins Rob to listen to your voicemails.

Rob and Penner begin by discussing Penners induction in to the 5 timers club.  Rob tells Penner that he associates his baby with Penner in some way because Rob found out that Nicole was pregnant on the morning after having dinner at Penners’s house.

Rob brings up whether or not Val had a fair shot at the game since she spent the first days on Exile Island.  It turns out that Penner also spent his first few days of Cook Islands in a similar position on Exile Island.  Penner thinks that Val had enough time to potentially re-integrate herself with her tribe.

Rob asks Penner about John Rocker since Jeff Kent was a tribemate of Penner’s in Survivor Philippines.  Penner says that John Rocker is nothing like Jeff Kent and says that he thinks John Rocker will be an early boot from the show.  Penner thinks that Rocker was just cast so that he could go down in flames.

Josh’s voting strategy is questioned and Rob and Penner debate whether or not the rest of the tribe will react positively to his marching to the beat of his own drummer.  Rob wonders how Rocker will get out of this situation he is in where Jeremy will assume that Rocker didn’t live up to his word.  This create problems for Julie, a player that Penner already isn’t that high on.

In addition, Rob and Penner discuss the best ways to negotiate with Jeff Probst, some times that Penner got in to trouble and how Penner would deal with a full combat challenge with one of his kids on Survivor.

Returning to her childhood bedroom, Nicole joins Rob to take your calls.  Among the topics brought up, Rob and Nicole discuss:

Listen to Rob talk with Val the morning after she got voted out of the game.

Watch the Show on Youtube – Listen to the Podcast