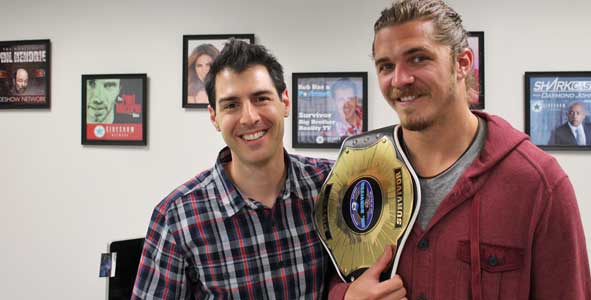 On the latest episode of Rob Has a Podcast, Rob hosts another jam-packed show featuring an interview with Mr. Survivor, Malcolm Freberg (@MalcolmWHW), another edition of “This Week in Survivor History” from Jordan Kalish (@JordanKalish) and we listen to your voicemails with Jeff Pitman (@TrueDorkTimes)

Rob headed down to the Studios of the Sideshow Network to record today’s interview with Malcolm.  Rob’s brother Danny is in studio with them and Malcolm is struck by how similar he looks to Rob. Rob says Danny can be Malcolm’s “fill in bro” for Eddie Fox. Malcolm also assures Rob that he’s been keeping his Mr. Survivor belt, which he is sporting during the interview, polished and in tip-top condition. Malcolm also says he was standing up cheering during the episode last week when Tony Vlachos and LJ McKanas both played their idols, as he appreciated the showmanship and the fact that they were trying to do something during tribal, even if it was ultimately unnecessary.

Malcolm tells Rob that he didn’t think there was a play this week to get Kass to flip, since it would be a 5-5 tie. Rob and Malcolm discuss the parallels of Spencer’s story with Malcolm’s two Survivor stints. Spencer’s pre-merge game was similar to Malcolm’s game in Survivor: Philippines (fighting to stay alive on a losing tribe), while post merge it has been reminiscent of Malcolm’s game in Survivor: Caramoan (down in the numbers at the merge, but with an idol for some protection).  Rob asks Malcolm to discuss how he would’ve played Spencer’s situation of having the immunity idol and the immunity necklace at the same time while being down in the numbers. He thought Spencer Bledsoe made the right move to preserve his idol for his own protection, even though he points out that it’s a little hypocritical for him to say that, since Malcolm himself used two idols in one tribal council during Survivor: Caramoan. Malcolm says he sympathizes with Spencer’s plight and is rooting for him, although he comes off as “young and brash” at times. Rob says he feels that in a Venn Diagram of Malcolm vs. John Cochran, the overlapping portion would be Spencer.

Rob asks Malcolm to explain why the players would vote out someone like Morgan who is not a threat to win the game – which Rob compares to Malcolm and company voting out Abi Maria in Survivor: Philippines.  Malcolm says that those two things were different because Morgan had not been a part of the majority alliance that was now a part of the jury in the way that Abi-Maria was. Rob and Malcolm say they both liked Morgan from the first episode, but were disappointed that she lost the killer instinct later in the game and didn’t fight to stay in once the numbers were not in her favor. Malcolm says he thinks the slow-motion videos that will live on for posterity on the internet will help keep him from missing Morgan too much.

Next Rob and Malcolm discuss Kass McQuillen. Malcolm is not a fan of Kass for several reasons. He doesn’t like that she gave herself a nickname (“Chaos Kass”), that she voted to keep J’Tia while on Luzon, and that she flipped for emotional reasons rather than pandering to Sarah for a couple votes. He agrees with Spencer’s assessment that Kass now has no shot to win the game. Rob and Malcolm both say that LJ is now their pick to win the game, even though he wasn’t heard from on this past episode. Malcolm is not yet sure what to make of Tony, but he hopes he stays on his TV for a while for the entertainment value.

Rob and Malcolm then talk about Woo’s #ninjastealthmode and comparing it to when Lisa Whelchel went through Malcolm’s laundry and found his idol. Malcolm loved Woo’s confessional talking about his ninja mode and referencing Sonic the Hedgehog. Malcolm also compares Kass babysitting Spencer searching for the clue to when Andrea Boehlke was tracking Malcolm during his idol search on Survivor: Caramoan. Malcolm also talks about Trish Hegarty and whether she’s built enough of a resume to win the game, and whether he would have ever considered keeping Brandon Hantz in the game after dumping out the rice.

Rob asks Malcolm a number of questions from the listeners of Rob Has a Podcast. They also discuss whether Malcolm supports the “intentional Matsing” strategy, whether Kass is similar to Erik Reichenbach, the RHAP cocktail, what Malcolm was able tell the other players in Caramoan about his game in Survivor: Philippines, and what Malcolm’s thoughts are about the upcoming Teenage Mutant Ninja Turtles movie. Malcolm also casts Survivors into the roles of the Ninja Turtles: Michaelangelo = Fabio, Leonardo = Boston Rob, Spencer as Raphael or Donatello, Splinter = Bruce Kanegai. Malcolm discusses his hatred for both the Brains’ move to vote out Garrett Adelstein early in the game and for the Tyler Perry Idol. Malcolm threatens to boycott watching his beloved Tyler Perry films if the all-powerful idol comes into play. They talk about the fact that there are 3 Brains, 3 Brawns, and 3 Beauties remaining, and whether Spencer is overrated. Rob also plays a game with Malcolm related to a slideshow CBS created called “Survivor Hotties” (which Malcolm was in) to determine whether the comments he read are real or fake. Malcolm also talks about the idea Rob and Aras discussed on Know-it-Alls about early jurors setting the tone in Ponderosa. Rob also discusses two hypothetical ideas: whether “Fat Malcolm” would have a better chance than current Malcolm, and whether Cochran in Eddie’s body would do better than Eddie in Cochran’s body. Malcolm also says he is not going to blow his load too early with the Mr. Survivor Instagram pictures, as he has a full calendar year to surprise people with mind-blowing pictures, so stay tuned.

This Week in Survivor History with Jordan Kalish

Jordan returns once again to reminds us of HUGE moments in Survivor History taking place this week from Survivor seasons in The Australian Outback, Marquesas, The Amazon, All-Stars, Palau, Micronesia, Redemption Island and Caramoan.

Rob speaks with the creator of True Dork Times to answer your many voicemails about the hidden immunity idol, Spencer’s strategy and Woo’s big move this week.