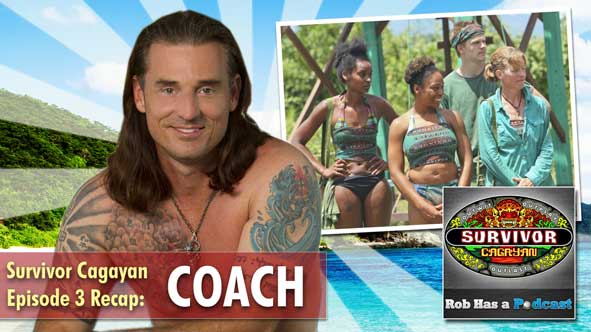 On this week’s Survivor interview edition of Rob Has a Podcast, Rob welcomes Coach Ben Wade back to RHAP for his third time on the interview podcast. After speaking with Coach, Rob is joined by RHAP blogger and PostShowRecaps.com co-host, Josh Wigler (@RoundHoward)

Rob calls up Coach who is at the gym and pumped up to talk “Survivor” while he pedals away on the exercise bike.  Sadly, Coach says he is now retired from “Survivor,” after his third time, so he may have to retire from Rob Has a Podcast, since it is his third appearance. Rob wants to know whether Coach would’ve kept J’Tia or Spencer in the tribe after the latest loss in the immunity challenge.  Coach was not impressed with J’Tia and definitely would not keep her around, even if she claimed that she would be loyal to the Dragon Slayer. Coach had hoped J’Tia would be a character like Naonka, who he liked as a character on the show, prior to her quitting. Coach describes the episode as “painful to watch,” likening it to the film Blackfish. He says Spencer is the only one who has a clue what is going on in the game, and he thinks Tasha and Kass should try to gain his loyalty.

Rob asks Coach a question from Gavin Costello about whether Coach would’ve kept J’Tia as a vote in his pocket in the same way he fought to keep Edna in the game in “Survivor: South Pacific.”  Coach explains the differences between a player like Edna Ma and a player like J’Tia and says he would’ve voted out Edna if she pulled what J’Tia pulled.  Rob goes on to ask about keeping a similarly unpredictable player in the game when Coach kept Brandon Hantz around in Survivor South Pacific over somebody like Mikayla.  Coach says that he was able to keep Brandon on a short leash and not have the type of outbursts that came from Brandon on “Survivor: Caramoan.” Coach quotes something he’s heard from fans about how his strength or brilliance in the game is evident when you see Brandon without Coach.

Coach thinks that some of the people on the Brains tribe may be “too smart for their own good.” In this week’s Survivor episode, Kass and Tasha were trying to make up their minds at tribal council which made Rob wonder if Coach ever was undecided at tribal about the vote.  Coach said the only time he was indecisive at Tribal Council was when he cast a vote that prevented a tie and sent Boston Rob home during “Survivor: Heroes vs Villains.”  Coach says he wishes that he would’ve forced the tie and sent the vote to draw rocks. Rob wants to know from Coach if he felt like Jeff Probst was pushing for Spencer to stay and, if so, is it because Jeff thinks Spencer will help the tribe or because Spencer will help the TV show. Coach said he can’t recall seeing Jeff be that aggressive in questioning to help Spencer plead his case. Rob mentions that J’Tia also suggested she felt the same way about Jeff’s questioning during her exit interview. Coach says Jeff is battling between what is best for the tribe and what makes for good TV.

Turning to the Brawn tribe, Coach discusses with Rob whether a player should ever be thinking of throwing one of the challenges in the game.  Coach says it’s bad for “Survivor” karma– you never throw a challenge. It will come back to haunt you. Coach says they shouldn’t be threatened by a party of two in Cliff and Lindsay. Coach describes watching the Brawn tribe try to throw the challenge and unable to lose against the pathetic Brains’ performance as “Blackfish times 2.” Coach thinks it must have been really painful for Woo to try to throw it since he is a great athlete. Rob wants to know if Coach was ever on a tribe that considered throwing a Challenge.  Rob and Coach also compare the lie that Tony told Sarah to the lie that Sandra told Russell about him in “Heroes vs. Villains.” Coach talks about the danger of lies getting exposed in the game, but he thinks the “blue blood bond” was the reason this didn’t backfire for Tony.

Rob then asks Coach some listener questions. Coach talks about whether he and Brendan from “Survivor: Tocantins” are similar to Cliff and Tony. Coach feels Tony is much more aware of the game than he was in his first season. Coach takes a question about whether there is a comparison to be made between Tony and Russell Hantz. Coach feels Russell makes his moves in a more intense way. Coach feels Tony is really likeable because he approaches his moves in a light-hearted way. Rob then follows up with a question he had asked Coach on Twitter– whether Coach sees himself as a Beauty, a Brain, or a Brawn. Coach is modest, saying he doesn’t think he is a triple-threat and that he wouldn’t fit the bill for any of those tribes. He says he’s not really that smart and he’s not really that strong, so if he had to pick, he would go with Beauty. A slow-motion tousle of the hair would be his secret weapon to win the hearts of “two people in America.” One thing Coach takes pride in, is that he always knew how to work the camera. Coach says he would like to work with LJ, but wishes he would show more pizazz in confessionals. Coach also talks about Mikayla, saying he had to “cut off Albert’s left-hand lady to become his right-hand man.” Rob also asks Coach the best way to navigate the scenario where people in your tribe are looking for the idol that you already have in your possession.

He also discusses what role (if any) he had in the “Survivor” victories of two former proteges (Tyson Apostol & John Cochran). Coach’s takeaway is that he “needs to touch himself more” because some part of him rubs off on others, but not on himself. He mentions he also helped Boston Rob a bit with Coach-chi… but ultimately he says he thinks he hindered these returning players the first time he played with them. Coach is very proud of both Tyson and Cochran, but says Cochran was the darkest horse which makes him extra proud of him. Coach then talks about Spencer Bledsoe’s comment that he will be the “Cochran that doesn’t suck.” Coach brings up Cochran’s massive Twitter following, writing gig, and extensive airtime… so he takes issue with saying Cochran sucks. But Coach feels sorry for Spencer’s position in the game. He also says he would select Woo to be his assistant coach out there.

Rob congratulates Coach on his exciting new that he has a baby girl on the way in May. Coach also mentions his birthday (September 18) and tells Rob he expects to receive birthday greetings on his 43rd birthday later this year. Coach also thinks aloud about who the worst competitor is he ever played with and settles on Colby Donaldson from “Heroes vs. Villains.” Coach also shares his thoughts on this season’s of “The Bachelor;” he feels Juan Pablo is the disgrace of America. Coach also gives his winner pick: He thinks LJ will win the game, and says Spencer is the dark horse. He thinks Spencer is a true warrior for putting up with the B.S. from his tribe, and that the remaining women, Kass and Tasha, on his tribe are two of the most moronic players he has seen. He thinks there is no hope for the Brains tribe. Coach RHAPs up by talking about the benefits of Coach-Chi and of securing an alliance early and staying strong with it, and makes a point to let Rob know that although he’s a mellower guy these days, he made sure to bring along some snark especially for his appearance today, which Rob appreciates.

Click to Hear ALL of Coach’s Previous RHAP interviews

Rob is joined by Josh Wigler to discuss a number of topics, starting with whether a tribe would ever intentionally “Matsing” a 3-tribe scenario to be better positioned to infiltrate the other teams after the merge.  Josh then shares some special insight into hens and roosters gleaned from his wife.

Rob and Josh then answer all of your voicemail questions, do commentary on a very inappropriate reward challenge and then see what the former Survivor players are saying on social media.

Listen to This Week’s Exit Interview with J’Tia Taylor: