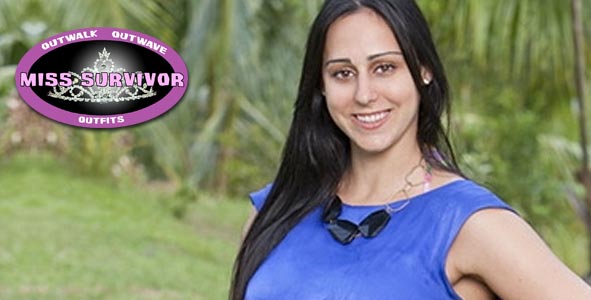 How will RC fare in her Miss Survivor interview?

This week we revealed the three finalists in this year’s Miss Survivor competition – Kim Spradlin, RC Saint-Amour and Chelsea Meissner. This interview is the second in our series of talks with the three women vying to be Miss Survivor.

Rob is joined by the Roberta “RC” Saint Amour, the first jury member of Survivor: Philippines, to discuss her campaign for the 2013 Miss Survivor competition. RC is excited and honored to be in the Final 3, going as far as to say that winning Miss Survivor is even more important to her than winning a million dollars. Right up front she gives a shout out to her “team”: campaign manager Tim Lamaster and speech writer Tom.

RC feels it’s important to have a platform in pageants, and she and her team decided her platform in this competition will be Survivor Peace. Because of her past experience, she would like RHAP to become a platform for people in the Survivor community to come on and discuss their issues. Rob wonders if RC will be bringing the people who are fighting together or if RC will be ending the fights she is having with others. RC tries to set the record straight, saying she is no longer fighting with anyone. Rob thinks that controversy seems to follow RC around, whether it’s on the island, on Ponderosa, or in Miss Survivor, but RC isn’t sure why that is.

Rob gives RC a hypothetical scenario of how she would handle if, for example, two players like Francesca and Phillip had issues to work out. She thinks it’s better to hash things out in the open on the podcast, rather than behind people’s backs on the internet. RC would even welcome someone coming to her if they have beef with her. RC would like to facilitate these conversations in conjunction with Rob, in a pairing she dubs “RC squared.”

In the talent portion of the interview, RC laments that her violin, which she’s played for 10 years, is at her parents’ house in Long Island. So her next best option is a whistle. She performs an excerpt of the Survivor theme song. Then Rob questions RC as to why she is not appearing in a bikini during the interview, which had been a campaign promise. RC explains that she realized her bikini is also in Long Island, but hints that she may wear the bikini to the debate.

Rob asks if she is intimidated going against Kim and Chelsea in the debate, and whether she feels she is the underdog of this competition. She thinks she is because she went out on Day 19, but attributes her success in the competition to her fans around the world including in the Czech Republic. Rob informs RC that she has the most vocal supporters and detractors, and RC acknowledges that happens to her quite a bit.

Rob brings up some questions from the Rob Has a Podcast Facebook Fan Page. Hakan Haktanir asked RC what kind of promise she would make to voters, similar to how Rob shaved his head after winning the Podcast Award. RC says she’s very available to fans and will do almost anything within reason. She invites fans to viewing parties in New York and even meets up for coffee to talk to fan about Survivor. She is also open for suggestions. Ethan Hentzel asked RC if she wishes Abi-Maria was in the final, which answers with an emphatic “No!” She would have been nervous to go against her, since Abi-Maria beat her in the game.

The third question was from former Survivor Billy Garcia who asked how winning the title will help RC save the whales and promote world peace. Since she’s already covered Survivor Peace in her platform, RC is willing to take on whales as her second platform. The fourth question was a Ding, Marry, Kill question from Erik Uuksulainen who provided the options of: Malcolm, Carter, and Pete. She says Carter is such a good soul, so she would definitely marry him. RC struggles with the last two options, but decides that based purely on a physical standpoint she would ding Pete and kill Malcolm.

Web producer Jessica Frey, wanted RC to say two nice things about RC and one nice thing about Pete. RC says she really respected and was impressed about how Abi handled herself at the reunion and when the show was airing. After some prodding, Rob gets her to also say she liked Abi’s dress. RC seems to be willing to lose Jessica’s vote because she stuggles to say anything more about Pete beyond his physical attributes.

Finally, Patrick Rettger asked RC to say one thing that places her above Chelsea and Kim, and one thing that puts Chelsea and Kim above her. RC says is that Kim and Chelsea were more successful and technically better Survivor players than she was. But RC doesn’t think this is the only quality to consider for Miss Survivor– personality and fan interaction are also important. In this area, she thinks she is more dedicated in that area than they are, and will do more with the Miss Survivor title.

Rob asks RC how she thinks she would have fared in an all-female tribe. She is unsure, but she notes that she went to an all-female college, and she would have stuck with Abi to the end if Abi had felt the same. In her closing statement, she thinks all the fans who voted her into the top 3 and encourages the listeners of Rob Has a Podcast to reach out to her if they have any other questions or suggestions for her going forward in this competition.

Stay tuned later in the week for our Miss Survivor finalist interview with Chelsea Meissner.

Does the winner of Survivor One World have what it takes to win Miss Survivor?