“It’s just tragic that I am stuck here with the goon squad of tribes.” – Malcolm Freberg

Malcolm Freberg is a fan favorite and two-time Survivor player, well known for his movie star good looks and flashy moves. Malcolm was also one of the few people to play survivor in back-to-back seasons. Jeff Probst approached him within 15 minutes of being voted off of his first season, asking him if he wanted to come back, with a gap of only weeks to prepare.

We first saw Malcolm on Survivor 25, where despite starting on arguably the worst tribe that had ever competed, Malcolm was able to survive right until the final four, where he was seen as too much of a threat to win, and voted out in fourth place.

Malcolm returned as a favorite for the second Fans vs. Favorites season, Caramoan. He was an outsider among a group of favorites who knew each other well, both from playing on previous seasons and from outside of the game. Because of this, Malcolm formed strong alliances with the fans, most notably the “three amigos” including himself, Reynold Toepfer and Eddie Fox. Unfortunately for Malcolm, despite some flashy idol play, he could not save himself and was voted out in 9th place.

“I had them so driven to finally play the game and see the threats and they finally saw me as a threat.” – Malcolm Freberg

Malcolm Freberg was a contestant on the season 25, Survivor: Philippines. Philippines went back to the three tribes model, each of which was led by a returning player who had previously been medivaced from the game. Malcolm was placed on the Matsing tribe, led by Russell Swan, who had been medivaced from Samoa. 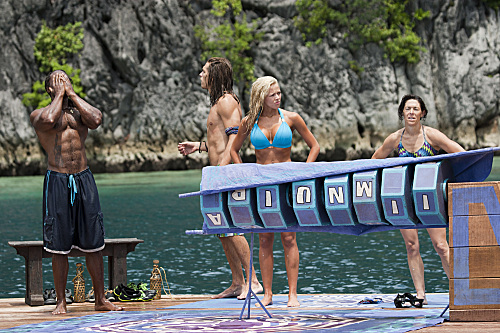 Malcolm made alliances within the tribe quickly, particularly a close alliance with Denise Stapley. This top secret alliance even included its own secret hand-tickle handshake. Due to his strong social skills and physical strength, Malcolm was in no danger of leaving the game early, despite Matsing being possibly the worst tribe ever seen in Survivor. Even though Malcolm and Denise were two of the most fit players in the game, in a tribe of 6, it only took a couple of really weak links to sink the whole boat and Matsing lost every immunity challenge until only Malcolm and Denise were left. At this point Malcolm and Denise were sent to live on opposite tribes. Denise became a member of the Jonathan Penner led Kalabaw, and Malcolm joined Mike Skupin’s tribe Tandang. Before they left Matsing, Malcolm and Denise decided to tear the beach apart looking for the hidden immunity idol they know was never found. Finally, Malcolm found the hidden immunity idol fastened to the top of the rice container.

It is a testament to Malcolm’s social skills that he was not targeted on joining the new tribe. With Lisa feeling like an outsider and RC in a feud with Abi-Maria, upon arrival every member of Tandang attempted to ally themselves with Malcolm. Tandang was on a winning streak, and did not attend tribal council until the merge. 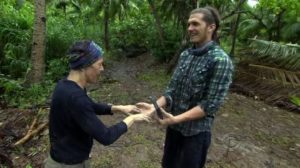 When the two tribes merged, Denise and Malcolm were able to reunite and also keep their alliance under the radar. Despite being one of the biggest physical and social threats left in the game, Malcolm was not in danger of being voted out. The Tandang tribe began to target each other, and RC was voted out.

After the RC vote out, Malcolm and Denise joined Penner, Carter Williams and former baseball player Jeff Kent in a new alliance against the power players of Tandang. Ultimately, they were unable to get Lisa Whelchel or Mike Skupin to flip with them, and Jeff Kent was the next survivor voted out. It was also revealed to all players left in the game that Malcolm had the immunity idol.

Despite Malcolm’s alliance knowing that he had an immunity idol, there was still no move to get him out, and they were able to convince Lisa and Skupin to vote with them to get Artis and Pete out of the game.

At final seven, Lisa approached Penner, asking for a final four deal. After he refused, Lisa took the offer to Malcolm and Denise, who readily agreed. This final four alliance held strong, and Penner, Carter and Abi were all sent home. But at the final four, despite Denise asking him to vote with her, Malcolm would not make this commitment. He wanted to go to the end with Lisa and Skupin, who he knew he could beat.

Even though he went into the immunity challenge with an advantage, Malcolm was the first person eliminated from the challenge. The three remaining castaways recognized what a threat Malcolm was to win the game and Malcolm was voted out 3-1. As a jury member, he voted for his friend and alliance partner Denise to win.

Malcolm returned to the Philippines to compete in back to back seasons in Survivor: Caramoan. He was placed on the Favorites tribe playing against 10 fans of the game. Once again, Malcolm’s strong social game saw him join the majority alliance within his tribe. This alliance was led by Phillip Shepperd, and was referred to as Stealth ‘R’ Us, with Malcolm given the nickname of The Enforcer. The other members of the alliance were Andrea Boehlke, John Cochran, Dawn Meehan and Corinne Kaplan. Apart from Malcolm and Corinne, the other members of the alliance had close friendships, both from previous seasons and from outside of the game. As a result, Malcolm and Corinne grew close, and formed a sub alliance. Together, they found the hidden immunity idol.

At the first tribal council, Stealth ‘R’ Us voted against Phillip’s old enemy, Francesca Hogi, and then did not visit tribal council again until a tribe swap. During this time, Brandon Hantz was unanimously and publically voted out during a challenge, for being mentally unstable.

Malcolm was swapped onto a tribe with three fans- Sherri Biethman, Reynold and Eddie. As they were physically a much stronger tribe, they did not visit tribal council until the merge. During this time, Malcolm formed a strong alliance with Reynold and Eddie. To prove his loyalty, Reynold told Malcolm that he was in possession of a hidden immunity idol. Despite having an idol of his own, Malcolm did not share this information with his allies.

Big move is a big flop

At the merge, Malcolm reconnected with Corinne, who had formed a close friendship with Michael Snow. With their votes, they planned to oust Sherri and break the alliance of the favorites. However, Corinne told Dawn of their plan, and Dawn passed the information on to Phillip. Corinne was blindsided in a 7-5 vote.

Malcolm was now sure that he was being targeted, and knew that his alliance was at a numbers disadvantage. At tribal council, thinking that he was targeted, Reynold stood to play his idol. Despite being in possession of his own idol, Malcolm said, “Hold up bro,” and convinced Reynold to play the idol for Malcolm instead. However, Malcolm had read the play incorrectly, and Michael Snow was sent home, leaving Malcolm’s alliance at three- Malcolm, Reynold and Eddie, the three amigos.

Reynold won the next immunity challenge, leaving Malcolm and Eddie vulnerable. However, just before tribal council, Malcolm was able to find another immunity idol. Stealth ‘R’ Us knew he had the idol, and planned to vote for Eddie. At tribal council, Malcolm did his most dramatic move ever and left Stealth ‘R’ Us stunned when he handed the immunity idol to Eddie. He them revealed that he had one for himself, thereby protecting his entire alliance. He finished his epic caper by announcing that he was voting for Phillip and they could do either turn on him or turn on each other. Stealth ‘R’ Us called Malcolm’s bluff and split their votes between Malcolm and Eddie, and when they played their idols, Phillip was sent home.

This left Malcolm’s alliance at a 6-3 disadvantage, and despite attempting to convince Erik Reichenbach and Sherri to flip, Malcolm would once again have to rely on finding an idol to stay safe. At the survivor auction, Malcolm successfully bid on the clue to the location of a hidden immunity idol. The twist was that he could only view the clue for 60 seconds. While looking for the idol, Malcolm found himself shadowed all day by Andrea, and couldn’t find it. He tried to bluff his way through, telling Stealth ‘R’ Us that he had found the idol.

At tribal council, Stealth ‘R’ Us decided to flush the idol, splitting the votes 3-3 between Malcolm and Reynold. On the revote, Malcolm was unanimously voted and finished in 9th place. On the jury, he (along with the other jurors) voted for Cochran to win the game.

Malcolm was runner up for fan favorite on his first season, narrowly missing out to Lisa Whelchel. He won the fan favorite award on Caramoan, cementing his all-star status. It seems inevitable that one day, Malcolm will return to Survivor. He plays a flashy game and is capable of making huge moves, but at the same time his social game is very strong, and sees him easily form alliances. Malcolm was a superfan before he was a contestant, and certainly has the knowledge and love for the game that served Cochran so well in his returning season. Perhaps, without the handicap of playing back to back seasons, Malcolm could become another superfan to win the game.