“That’s bollocks, and you know it.”- Penner 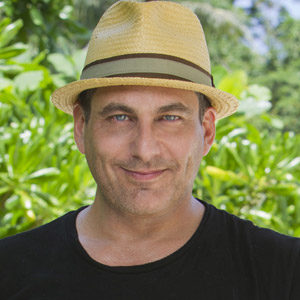 Jonathan Penner is considered one of the smartest yet unluckiest players to never win Survivor.

While incredibly intelligent and strategic, Penner’s social game is not strong enough to create tight bonds with his fellow castaways. He typically wants to take the game a step at a time and is afraid to commit to final four or final three scenarios too early on. This results in other players feeling insecure about him and looking for alliances elsewhere.

Though widely known by Survivor fans as “Penner”, he was never once referred to by his last name throughout his first season, and was called “Jonathan” by everyone.

“I’m the wandering Jew without a tribe.” – Penner

Penner’s play in the Cook Islands is characterized as the outsider who could never catch a break the entire season. His alliances were constantly on shaky ground, which led to the biggest move of the season- when he joined Candice Woodcock-Cody in a ‘mutiny’ against his tribe.

Cook Islands was a season that was controversially divided into four tribes, each of a different race. Penner was placed on the all-caucasian Rarotonga tribe, along with Candice, Parvati Shallow, Adam Gentry and Jessica “Flicka” Smith. Penner’s social game became a problem early on as he was aggressive about taking supplies for his tribe at the marooning. As a result of questionable chicken procurement, he was sent to Exile Island, where he was given a clue for a hidden immunity idol. Despite his best efforts, he could not find the idol, and returned to his tribe empty handed.

Penner’s tribe performed well in the first two immunity challenges, and did not visit tribal council for the first six days. On day seven, the racially divided tribes were merged into two separate tribes, Rarotonga and Aitutaki, known as Raro and Aitu. Penner found himself on Aitu. Once on Aitu, Penner and Candice continued to work together, allying themselves with Yul Kwon and Becky Lee. Penner tried to maintain an alliance with Flicka, but struggled with her altruistic view of the game, therefore making Candice by default, Penner’s closest ally.

The two new tribes were evenly matched, and at final 12, had 6 members each. It was at this point that the castaways were given the opportunity to ‘mutiny’, or to swap tribes. Candice, with her closest allies on the Raro tribe, quickly stepped off the mat. Penner waited until the last second, and feeling backed into a corner, decided to join her. It was a rash decision that he would come to regret.

Penner now found himself back with his original allies of Candice, Parvati and Adam; however Candice had just made what she considered to be an individual move. She had not expected or wanted Penner to follow her, and Candice’s game plans did not include him. Penner found himself isolated on a tribe that was made up of younger people, who did not share his work ethic. He felt that he was on the chopping block, and worked as hard as he could in order to make himself valuable. He voted with Candice, and managed to avoid elimination. Although the Aitu tribe found themselves down to only four people, they became an unstoppable force in immunity challenges, and Raro found themselves visiting tribal council multiple times. One of these times, a secret message in a bottle revealed that they had to vote out two people at one tribal council. This led to Raro’s numbers dwindling, and they entered the merge with a 5-4 numbers advantage.

The idol and the rat

At the merge, Yul revealed to Penner that he had the immunity idol the entire game and expressed a wish to work together again. Penner flipped back to the Aitu Four’s side and voted out Nate Gonzalez, hoping to win favour with Yul. He felt like he was on the bottom of the Raro alliance, and Yul made it clear that he would use the idol to eliminate Penner unless he voted with them. This move infuriated the remaining Raro members. He was called a weasel and a rat, amongst other things. The Raro members made it clear that they wanted Penner out.

On day 28, the Survivor auction was held. Penner’s obnoxious behavior and over the top eating irritated all his tribe-mates. The Raro tribe lobbied Yul to vote Penner out, while personally attacking Penner for being arrogant and selfish. Ultimately, Yul and the Aitu Four were able to use Penner’s vote to get rid of their biggest threat left to their end game: Candice.

With Candice gone, the Aitu Four had no more use for Penner. While Penner may have been a fan favorite for his game play, he was seen as the villain of the season by his other tribe-mates, which eventually led to his ousting at final seven. Adam and Parvati promised Yul that if Penner was eliminated before they were, then they would give Yul their jury votes. Despite Penner’s strong performances in challenges, he was never able to win individual immunity, and was voted out in a 6-1 vote. 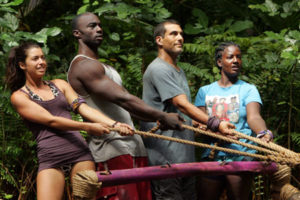 Penner’s strategic bad luck continued in Survivor Micronesia: Fans vs. Favorites. He made a strong day one alliance with Yau-Man, Eliza, Ami and Johnny Fairplay. However, his alliance was quickly rocked when Fairplay decided to quit the game at the first tribal council by asking his tribe-mates to vote him out. Fairplay’s wish was granted and he was sent home.

Realizing that there was already an incredibly strong alliance between Parvati, James, Amanda and Ozzy, Penner approached Cirie, who had not yet chosen either side. Cirie was hesitant, but did agree to join Penner’s alliance. However, watching Penner interact with his alliance, especially Yau-Man, Cirie realized she’d joined a four person alliance as their fifth, with no chance to move up. This opened the door after the day seven reward challenge for Parvati and Amanda to make their move and seduce Cirie to their side betraying her shaky alliance with Penner.

After the Favorites tribe lost the day nine immunity challenge and were forced to go to tribal council, Cirie campaigned and convinced her new alliance to vote out Penner’s closest ally, Yau-Man. The fireworks that flew that night at this tribal council between Cirie and Penner are still considered one of the greatest tribal council fights in Survivor history. Cirie’s new alliance stuck by her side, and Yau-Man went home. This move by Cirie, formed one of the most powerful alliances the game has ever seen, and it lasted all the way until the end, leading to an eventual win for Parvati.

Penner left without a chair 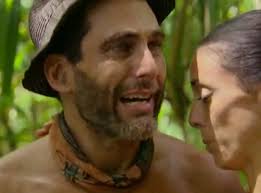 After Yau-Man’s exit on day nine, Eliza attempted to betray her alliance and throw Penner to the wolves, promising Parvati her vote if she could join her alliance. However, Parvati made it clear in a follow up confessional, that she had no intention of keeping Eliza over Penner.

Unfortunately, tragedy soon struck for Penner. After the tribe swap on day 12, Penner and Alexis were tied together, running the reward challenge, chasing two members of the opposite tribe. Penner’s knee was severely cut on a log barricade from the challenge course. This cut became infected, and on day 15, the medical crew was called to camp to look at Penner. After much assessment, it was decided that the infection was too severe, and would only spread, endangering his health. He was pulled from the game. His final words were, “That’s bad luck Johnny. I had this game. I HAD it. I could see the day light.”

Whether he actually could see the day light is questionable considering the fate of the rest of his alliance but we will never know. Penner was considered for Survivor Heroes vs. Villains, but after Russell Hantz became such a big hit the season before on Survivor Samoa, production decided to go with Russell on the Villains tribe. Penner was brought back for Survivor Philippines instead.

Penner returned for a third time along with fellow returnees Mike Skupin and Russell Swan in Survivor: Philippines, all players who were previously medically evacuated out of the game before they had a chance to shine.

Former professional baseball player Jeff Kent had it in for Penner from day one. It was a happy coincidence that Penner found the clue to the hidden immunity idol early on and pried it off the lid of the rice container. “How stupid are we?” Jeff Kent asked when he noticed the piece missing, but recognizing that Penner had the idol, Jeff begrudgingly aligned with him bringing his alliance-mate Carter with him. As fate would have it, the petite Dana quit suddenly and evened out the number of women to men in Penner’s tribe. When Denise was assigned to their tribe from the then-defunct Matsing, it was Jeff who convinced her to join forces with the men against the remaining women.

When Penner and Skupin got in a stand off at a food reward challenge, Penner offered the remainder of his tribe’s rice in exchange for Tandang’s forfeit. Skupin took the deal and Penner’s tribe enjoyed a feast and letters from home. But when Kalabaw lost the immunity challenge, Penner was on the chopping block. Ultimately, Jeff and Carter did not want to vote out Penner and his idol – they wanted use it to keep their alliance strong in the merge and they voted out Katie instead.

At the merge, Penner realized he was in danger. Jeff Kent no longer trusted him and alliances were shifting everywhere throughout the fractured merged tribe. Sensing he was at risk, Penner played his idol and voided the 5 out of 11 votes cast against him sending RC home. Penner was left essentially a free agent with no alliances and no allegiances, another testament to his weakness: a chronic inability to forge deep relationships within the game. Luckily, he won immunity in the next challenge and preserved himself for another vote.

Penner turns to the dark side

Next, Penner managed to connect with Lisa in a way that would be heartwarming if it weren’t so devious. After empathizing with her struggles in the limelight growing up in front of America, he then led her through the story that America “wanted to see” play out on Survivor. After identifying her psychological weakness of compulsive people-pleasing, he then attempted to exploit it to earn her vote. He worked on getting Lisa and Skupin to work with his foursome of Malcolm, Denise and Carter against Abi-Maria, Artis and Pete. But Lisa stayed loyal to her tribe of misfits. It was Skupin who was convinced and Artis was the next to go.

It was at this point that Penner made his fatal mistake: the same fatal mistake he made the last time he played. Lisa Whelchel offered Penner a final four alliance deal with Skupin. But Penner was so concerned with jury management (not wanting to anger anyone about to be voted off) that he insisted that they just take it a day at a time, unwilling to make a firm commitment. This came across as shifty and unreliable, so Lisa and Skupin took their final four deal and offered it to Denise and Malcolm instead. 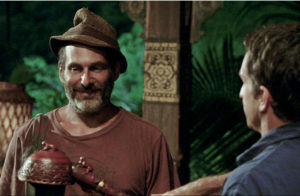 In a post-game interview with Entertainment Weekly, Penner admits,“My mistake, of course, was that I was playing both ends against the middle without making a commitment to anybody.” At his last tribal council he tells Skupin and Lisa that they cannot win against Malcolm or Denise. “If you do vote me out tonight,” Penner argues, “you will give a million dollars to one of these two people.”  He was right. For a second time in his Survivor career, he finished 7th, and Denise won the season sitting in a final three beside Lisa and Skupin.