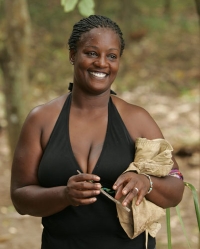 “I’m a gangsta in an Oprah suit.” – Cirie Fields

Cirie Fields is arguably one of Survivor’s greatest social players. Likeable and highly intelligent, she has proven that she can stay cool under pressure, fly under the radar, and take out the biggest threats one by one.

Although not athletic – she even had to lose weight before she could first appear on Survivor – Jeff Probst claimed, “Cirie seems to have that quality that you can’t manufacture, which is true likeability.”

Cirie first appeared on Survivor 12, Panama: Exile Island where she quickly became one of the most popular players of all time. Before appearing on Survivor, the mother of three spent years watching it from her living room.

“I’m a couch potato,” Cirie admitted in her Panama pre-game interview. “And I wanted to do some things before I got too old. I love this show, I want to just challenge myself, and see how far I can make it. I think I can win.” 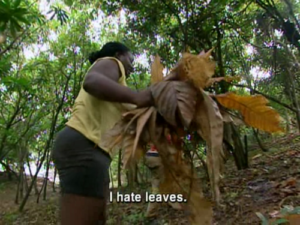 In the first episode of Panama: Exile Island, viewers didn’t like her chances. The city born and raised nurse announced early on that she was “afraid of leaves” because of what might be hiding underneath them.

But when her tribe of “older women” lost the first immunity challenge, she went to work. Fearing that she would be targeted as the weakest physical player, she made a case to her other tribe mates to vote off the strongest woman among them, Tina the lumberjack. “She’s nice and everything and I like her too,” she stated. “But I’m trying to win.”

In the season’s first what-just-happened moment, Tina was sent home. And thus set in motion Cirie’s pattern of attack: take out anyone strong who stood between her and the million dollars.

The strongest players must go

When the four tribes merged into two, Aras Baskauskas choose Cirie in a school yard pick that potentially changed both of their fates forever. Cirie joined her new tribe just as Shane Powers was in the throes of his post-nicotine meltdown that began with him questioning what he was doing in the island and ended with him virtually questioning his very existence. As his alliance of Aras, Danielle and Courtney tried to shore him up, Cirie was only too happy to lose another player. She had humorous confessional where she expressed her dismay in a high pitched voice, “If somebody wants to quit, let them quit!” 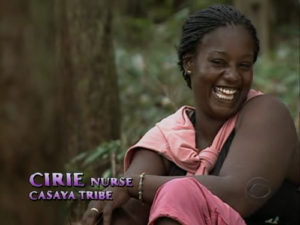 On the new tribe, Cirie stayed alive through her inherent likeability. She kept her head down as her tribe’s majority alliance started to implode. Danielle and Courtney began to commiserate with her over Shane’s irrational and abusive behavior. Cirie’s confessionals consisted of her giggling fiendishly while she described her strategy of waiting for her tribe to eat each other.

Cirie gained confidence as the season progressed. At the reward challenge where Survivors were asked questions about their tribe mates, Cirie’s hyper-awareness of her tribe led her to victory. In the same challenge, Cirie was the Survivor with whom the other players claimed they would “most trust their life”. Indeed, the majority of remaining players believed they had an unbreakable bond with Cirie.

A master strategist is born

When the tribe was down to only six, Cirie astutely surmised that both Shane and Terry wanted to bring Courtney to final two with them. “That makes Courtney the most dangerous player out here,” Cirie concluded.

Cirie’s ability to not only plan out her own endgame, but also identify the strategies of the other key players is one of the ways in which she truly excels. Cirie realized that she must eliminate Courtney to remove options from Shane and Terry. In a beautifully conceived three layer deception, Cirie blindsided Shane and Terry and sent Courtney home. Aras and Cirie quickly covered their tracks telling Shane they found out last minute that Courtney was targeting him and the move was to protect him.

Unfortunately, Terry’s unstoppable immunity run was Cirie’s downfall. With only Cirie, Danielle and Aras to choose from for the final vote elimination vote, Danielle and Terry voted for Cirie while Aras stayed true and voted for Danielle. The two women were forced to do a fire building tie-breaker challenge and Cirie was defeated.

Ultimately Aras won the season, crediting much of his success to his bond with Cirie.

Micronesia introduced the format of Fans vs. Favorites where a tribe of returning players were pitted against a tribe of superfans. Micronesia is considered by many to be in the top three best Survivor seasons of all time. This season of Survivor saw more blindsides at tribal council than any before it.

On the Favorites tribe, Cirie was on the outside of two, four-person alliances in the first few days of the game. After Jonny Fairplay asked to be voted out, Cirie became the swing vote. While she let Jonathon Penner believe that she was with his alliance, in reality, she hadn’t yet made up her mind. She needed to consider not only who had the players she felt she could beat but also which players she felt she could trust.

“If I don’t trust you, then you can’t believe a word I tell you,” Cirie confesses.

On day seven, Cirie made a final three alliance with Amanda and Parvati. All of the women agreed that they would not be able to beat Ozzy or James in the finals and swore to stick together until the end, all the while making Ozzy and James feel like they were in control. Penner was furious but ultimately had only himself to blame for not making her a better deal. Cirie explained that it didn’t make sense for her to agree to be at the bottom of a five person alliance.

When the tribes switched, Cirie followed her pattern of targeting strong players. While the young players and even the fans want to eliminate Chet, Cirie managed to convince Ozzy to vote off the strong-willed and physically intimidating Joel instead. “Joel is dangerous,” Ozzy parroted Cirie in a confessional soon after, showing Cirie’s Jedi-like mastery of persuasion.

When Parvati came into the merge with two fans under her wing, Cirie saw her chance to get rid of the ultimate threat: Ozzy. In a massive blindside, Cirie convinced everyone who was not close to Ozzy to vote for him while keeping it a secret from everyone who was, including one of her closest allies, Amanda. This move was particularly risky given that Ozzy had a immunity idol in his possession. Ultimately, the ruse worked: Ozzy felt safe that fan Jason was going home, and Ozzy was voted out with his idol in his pocket.

Cirie was one of four players who masterminded one of Survivor’s greatest moves: convincing Erik Reichenbach to give up his immunity necklace. At final five, Erik Reichenbach was safe from the vote, leaving the core women’s alliance no choice but to turn on one of their own. While it was originally Amanda who posed the idea, it was Cirie who formed and articulated the argument that compelled Erik to surrender his immunity necklace to Natalie.

It was likely this move that sealed Cirie’s fate of being considered one of the most dangerous players in Survivor history. 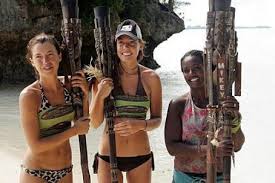 The original final three alliance forged on day seven held true but, in the last days, it was revealed that there would be one last immunity challenge for a final tribal council of only two.
Had it been a final three instead of two, it is commonly believed that Cirie would have won against both Parvati and Amanda.

In the end, Amanda chose Parvati to go to final two with her, feeling that she would have a better chance to win against her. Amanda lost to Parvati in a 5 to 3 vote.

Her third time playing, Cirie struggled in Heroes vs. Villains right out of the gate. She and Parvati were flagged as the two players the other Survivors were most worried about. It was assumed that Cirie already had relationships with Amanda and Parvati that would be at her disposal. She tried to form alliances but no one was interested. She banded together with Candice, who was also on the outs, but it was to no avail.

She said in a post-game interview with Entertainment Weekly’s Dalton Ross, “I think, unbeknownst to me, I never had a chance. I didn’t realize how threatening other players saw me.”

Yet, ironically, she does not consider herself a “mental” player. She says in the same interview, “I have one aspect of the game I do well and that’s the social aspect.” She did not understand why the returning players would be more worried about her than about the “triple threats” like Tom Westman. Either her competitors were extremely short-sighted or Cirie vastly underestimated her own skills.

After likely her best performances in reward and immunity challenges in any of her seasons, Cirie was voted out 4th.

Is there any hope for Cirie to come back and win the game, given that her reputation precedes her? Perhaps on a season filled with winners and triple threats she might get lost in the crowd. For this mom who desperately wants to make her family proud, we can only wait and see.