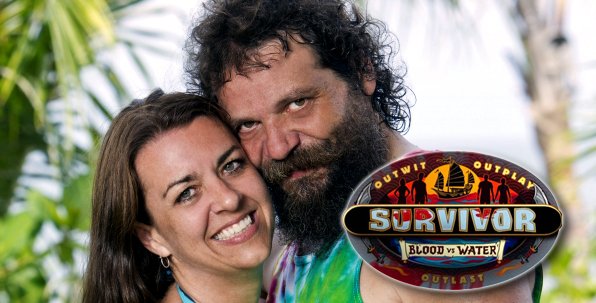 Like a tie-dyed Eddard Stark honoring himself to doom, Rupert Boneham began his fourth round of Survivor by abandoning pissed-off Tina and the other pissed-off veterans, forfeiting his life in the game in the name of Laura.

It didn’t have to go down like that. But I’m glad it did. It’s nothing personal, Big Rupe, but I love that Survivor: Blood Vs. Water started off with your fuming, frustrated fireworks. It was tense. It was great television. And it set the tone for one bloodbath of a season. 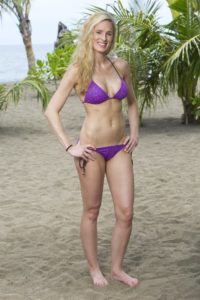 At the very least, it was a bloodbath of a premiere. Just ask Candice and Marissa, if you don’t want to ask Rupert. (I don’t blame you; he’s got the angry-beard-thing going on right now.) All three exits were very different, but they all made one thing equally clear: turn off the brain, because Blood Vs. Water is all about heart.

Survivor is back, and so is The Wiggle Room. I’ll be here all season long, talking every Friday (or as many Fridays as I’m able to manage) about the flexibility of the game, the good and bad moves our players have made, what they can do to get themselves out of sticky situations and into good ones, all that fun stuff. Let’s get into it.

In my mind’s eye, I see Rupert lying on the beach, resigned to his fate, as a red-faced Probst and a shell-shocked Laura argue nearby. I see Probst, pleading with Laura to talk her husband out of his madness. I see melancholic Rupert respond, “Jeff, you’re the smartest host I’ve ever met, and you’re too stupid to realize — we made up our minds 10 minutes ago.”

And “pop” goes the pirate.

“Bad” jokes aside, if it wasn’t clear before, it should be now: Rupert is not built to win Survivor. He’s built to roar and cackle and describe things like an eight-year-old. He’s built to champ up for the occasional brute-force challenge, to build terrible shelters, and to catch copious amounts of fish. (Well, maybe not that last part anymore.) But he’s not built to win, as he artfully proved on his 101st day in the game.

In the context of the game, Rupert killed his wife. She wasn’t in a good position to begin with, but Rupert sealed the deal by taking her place on Redemption and sending her to Galang. She won’t fit in on a tribe of nine veterans, no matter how seasoned she thinks she is. (“They’re newbies, they don’t know what they’re doing,” Laura apparently said after Tadhana kicked her out, according to Gordon Holmes’ behind-the-scenes account. Amazing.) No amount of spin will make Galang happy that Rupert took his brute-strength to Redemption instead of against the people who voted out his wife. Laura is an easy first-boot for the returning players, and Rupert, if he’d given the situation even a second of hard thought, should have known better.

Rupert the Good Guy, as Russell famously called him, gave up his game in the name of love; but he gave up his love’s game as well. Horrible form for a four-time player.

Like Sawyer always said, a Woodcock doesn’t change her stripes. Candice has a new last name, but her reputation as a devious cutthroat is so front-of-mind that she was considered less favorable than Colton. Colton! But the biggest shock of all was Doctor Cody standing his ground and letting his wife head off to Redemption, with only her biggest enemy in the game for company.

For what it’s worth, Doctor John made the right in-game call, for all the reasons Rupert shouldn’t have swapped with Laura. (Bad call in life, good call in the game. Important distinctions.) His decision hasn’t hurt his place on his tribe. John’s well positioned in the Alpha Male Alliance (aka AMA; you can ask Culpepper anything, but please, no math questions) and won’t be going anywhere anytime soon, unless he decides to take Candice’s place on Redemption.

Maybe I should say “until” instead of “unless,” because it’s inevitable: if Candice survives the first round of Redemption, Doctor John will take her place. (We know he won’t do it next episode, based on previews.) He’s too guilt-ridden to let this one ride all the way to the merge. If and when John opts for Redemption, it’s not a game-over scenario for Candice. I’m sure John would vouch for her as a number to keep the AMA strong, and I expect the AMA lacks deep enough Survivor know-how to know that you never ever eeeeever trust Candice ever, so she could slip through the cracks while the Rachels and Katies of the world are sent packing in her place.

So, for the five Woodcock fans out there, don’t lose hope. Candice is still in this. A well-timed sacrifice play from her husband could send her straight to the merge.

I imagine Survivor night was tough on fellow columnist Sarah Freeman. Sarah was high on Team Peterson during the RHAP Survivor Blogger Roundtable earlier in the week. Honestly, so was I. Shame on us, right?

Seriously, help me through this. Isn’t Gervase supposed to be insanely likable? That’s not what I’m seeing. Judging by the first episode alone, the Gervase of Survivor 27 is a loudmouth braggart who can’t survive on his own and still can’t swim. Not a good look for Gervase.

I’m very curious to see how he’ll react when he sees his niece on Redemption. I’m even more curious if anyone will pipe up and explain why Marissa is where she is: all thanks to Gervase’s post-victory arrogance. Will that information galvanize Gervase to take Marissa’s spot and redeem himself? Will he absorb the information and use it to become a better-rounded player going forward? Or will he just shrug his shoulders, wish Marissa luck, kick back and watch? I really don’t know. Wednesday night’s Gervase is not the Gervase I expected or hoped to see on Blood Vs. Water, but that might be the version we get. I hope I’m wrong.

The Wiggle Room loves to ask: what did the ousted player do wrong? In Marissa’s case, the answer is, well, nothing, unless being related to a sore winner is considered “doing it wrong.” The numbers were overwhelmingly against her, thanks to the five-man broliance that pretty much just need to get rid of a girl, any girl. Marissa became that girl because her uncle acted like a jackass at a challenge. As Probst put it, that’s a devastating reason to get voted off, and more than enough reason for Tadhana to earn Marissa’s scorn as her torch was snuffed.

Tadhana set a dangerous precedent in booting Marissa. They voted her out because her relative did something mean. Rather than ousting one of the pathetic puzzlers, they voted out a proven players simply because Uncle “Jarvis” is a jerk. That sends an incredibly strong message to the other tribe. Galang now has a big reason to target players to rattle specific Tadhanas — killing Monica to get to Brad, for example. I think something like that is a very strong possibility in the near-future, so much so that Laura Boneham might actually survive Galang’s first Tribal. (Key word: “might.”) Culpepper, you’ll reap what you sow.

Speaking of Culpepper, can we just take a time-out and talk about how annoying it is that Probst is already calling him Culpepper? Jeff loves to play the Surname Game with his favorites, but come on, this is early and undeserved even by his standards.

I guess I understand it, though: Culpepper is part Andrew Savage, part Phillip Sheppard, and all Jeff Probst man-crush material. He’s an aloof goof with brawn in place of brains. That’s a Jeff’s Special if I’ve ever seen one.

The Culpepper question is, which player will we ultimately see? The Savage leader who bows out early? Or the Phillipian fool who gets dragged to the finals for the easy win? It could go either way. But even if you don’t like him, you can’t deny his current place in the game at the top of a dominant alliance. He’s the obnoxious figurehead, and that’s someone worth hanging onto, from a certain perspective. But if he keeps yammering on about fours and fives and nines all day, if he keeps putting that foot in his mouth, that value will diminish quickly.

So, who’s doing this right?

Vytas is doing this right.

He’s openly sharing his story, his dark history, his empowering tale of overcoming drug addiction. It’s not an entirely calculated move, but it’s cunning all the same. Opening your heart to strangers is an immediate way of earning trust. Mission accomplished for Vytas: he’s in the majority alliance with the other Alpha Males, and he seems friendly with the minority of Ciera, Rachel and Katie. Nobody on that tribe is in a better spot, nobody received a better edit. MVP of the episode, hands down.

There’s so much more to talk about, but I’ll leave some discussion points for my fellow bloggers. For now, I’ll leave you with this:

I was among the many skeptical Survivor fans entering the new season, but right now, I’m all in. I’m not overly fond of 20-person seasons, because I find it hard to get to know anybody until after the first four or five votes. But right away, I feel like I already have a good grasp on all of the current season’s players.

Tina Wesson, almost entirely absent from the Australian Outback premiere, was a pivotal narrator of the season’s opening moments, while her daughter Katie was the big red herring of the premiere’s close. Monica and Colton’s One World beef was set up as an important reference point for the coming episodes, while their significant others were busy aligning and ruling over Tadhana. Team Morett got some solid exposure, too, between Laura’s crazy-eyed near-exit and Ciera’s stories about being a teen mom. Rachel was on the quiet side and Tyson only had one confessional, but he started the fire like the good little Boston Rob padawan he is. The Hayden/Kat tandem was fairly quiet as well, but the Big Brother winner already made a charming impression on me, and I’m more than happy to wait a little longer before Kat opens her mouth. Aras was his usual loose-lipped self when telling Laura Boneham how much he wished her husband was still around; elsewhere on the island, Vytas was making strong in-roads toward the Fan Favorite Award, if not the win. And that’s not even mentioning the episode’s ejected players and their respective loved ones.

After one episode, there’s already at least some level of familiarity with each and every one of these Survivors. Chalk that up to the loved ones twist, or the awesome 90-minute run-time (more like that please, Jeff?), or the “Day Zero” overnight, or that eruptive first 20 minutes. No matter how you slice it, the Blood Vs. Water cast is a compelling one. That’s half the battle for me right there.

So, what did you think of the premiere? What’s your take on Big Rupe’s goof? Is there still hope for the Woodcocks? Can Team Peterson recover? Will Culpepper ever get a first name? How do I tell my wife I’m leaving her for Vytas? I want to hear your take on all that and more in the comments below, or you can shout at me on Twitter @roundhoward — like Ron Howard, but rounder.