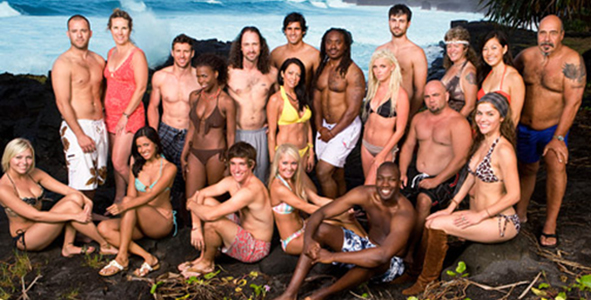 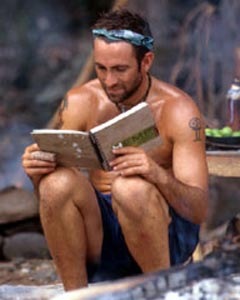 Stung by a sea urchin.[/caption]

Being that Survivor takes place in exotic outdoor environments, certain situations happen on this show that would never occur anywhere else on reality TV.  A prime example of this would be getting stung by a sea urchin, which is exactly what happened to John Carroll on Survivor: Marquesas.  I don’t know if he learned this in nursing school, but John new that in order to decrease the pain and swelling, he needed to have one of his fellow tribe members pee on the sting.

Two weeks ago, I called Mike Skupin’s burnt hands one of the most memorable visuals in Survivor history.  Kathy Vavrick-O’Brien squatting over John to pee on his hands also belongs in this category.  John said that he was in too much pain to be embarrassed, and just thought of Kathy’s urine as peroxide.  Kathy was eager to help out her tribemate, but felt embarrassed as she was picking up her pants after doing the deed.

What’s less memorable, but almost as funny, was Judge Paschal English trying, but failing, to pee on John’s hands before Kathy gave it a go.  In a confessional, Kathy attributed this to performance anxiety.

The moral of the story is that peeing on someone’s hands is admirable, while peeing in the tribe’s rice is not.  Got it Lil’ Hantz?

As we found out last week, Russell Hantz had just been voted out for the first time in his Survivor career.  However, this season was Survivor: Redemption Island, so he still had a shot to stay in the game as long as he beat Matt Elrod at dominos.  At the time, nobody realized how big of a challenge monster Matt was, and therefore I was on the edge of my seat.  Personally, I was rooting for Russell.  Some people argue that he’s one of the best players ever, and others argue that he’s one of the worst.  All I know is that Survivor is even more entertaining than usual when he’s involved.

The challenge was close, but unfortunately Russell couldn’t seize the moment and was eliminated from the game.  It was the first time that he wouldn’t makes the finals, which Jeff Probst made a point to emphasize.

The most memorable part of Russell’s elimination was not the challenge itself, but how he reacted to the defeat.  He had done a lot of things on the show before this moment, but I don’t think he ever cried until he lost at the Redemption Island arena.  The man was brought to tears, struck by the disease known as crybaby-itis.  Dramatic music played in the background to make the moment even more emotional.

However, the tears stopped and the music changed when Russell decided that he couldn’t go out that way.

He began berating his tribe members for throwing a challenge to get rid of him and called them pee-wee leaguers compared to himself, a true Survivor professional.  He compared his role on the Zapatera tribe to a football player who needs to run, catch, and throw the ball.  This is basically how John Madden used to describe Brett Favre.

Ralph Kiser, one of the Zapateras in attendance for the duel, revealed to the other tribe that he had the hidden immunity idol in order to prove that his tribe was fine without the self-proclaimed ‘King of Samoa’.  Russell almost got Ralph to show Ometepe the idol, but was stopped by Sarita White.  Ralph tried to play it off like he was kidding about having it, but it was obvious that he had initially told the truth.  Of course ‘The Specialist’ Phillip Sheppard pulled his former federal agent crap, claiming to be a life-long human lie detector test.

When it was all said and done, Russell was forced to drop his buff in the fire and exit the game.  He used his parting words to retire from Survivor, but I think he may end up being like Brett Favre in this respect as well.  Russell Hantz taught us that the right time to go off on your tribe is after you’ve been eliminated, not when you’re still in the running.  Got it Lil’ Hantz?

It’s pretty amazing that exactly 11 years to the day after Kathy peed on John’s hands, Brandon Hantz threatened to pee in the rice on Survivor: Caramoan.  This week is the 1 year anniversary of Brandon’s meltdown, which is why I’ve been giving him such a hard time throughout this post.

Fortunately for the Bikal tribe, and unfortunately for the viewers, he didn’t go through with the pee threat.  He did however dump out the rice and beans in a fit of rage, serving as the inspiration for nuclear engineer and self-appointed nerd lover J’Tia Taylor on Survivor: Cagayan.  This outburst was in reaction to Phillip Sheppard’s Stealth R Us crap.  It all lead to one of the most unique tribal councils in Survivor history.

The following occurred in 10 minutes and 8 seconds:

00.01: Jeff Probst says “come on in guys”, and the Bikal and Gota tribes enter the challenge arena.  This typically means a challenge will occur.

00.30: Reynold Toepfer talks about how bad his tribe’s camp life is compared to the returners’ due to never winning rewards.

01:01: Cochran talks about the damaged morale and fatigue that really exists within his tribe.

01:12: Brandon says he’s not doing too well due to his outburst with Phillip.

01:25: Brandon steps off the mat to talk to the other tribe.  He tells Gota that he’s their “second-chance” and asks them not to let Phillip get to the end of the game.

01:45: Corrine volunteers to explain what’s going on.  She says that the Bikal tribe is forfeiting the challenge so that they can go to tribal council.  This turns into a Model UN-type speech about getting rid of discourse in their camp.

02:10: Brandon loudly continues to clarify the situation.  He says that Corrine’s speech is bullshit and that the returners have no respect for the new players or for the game itself.  He talks about his love for the fans because they’re the underdogs.

02:35: Jeff calls Brandon over to where he’s standing.  Brandon comes as called.

02:57: Brandon starts unleashing on Phillip and Stealth R Us.  He calls the nicknames cartoonish and degrading.  He tells Phillip to stop talking so highly about himself, and that he only got to the end of Survivor: Redemption Island because Boston Rob took him there.  Apparently Phillip had told him not to bite the hand that feeds him, so Brandon channels his inner Jesse Pinkman and says “I feed myself, bitch!”

03:27: Brenda Lowe whispers that this is a meltdown, which is the first time anyone realized she was on this season.

03:30: Brandon says that he’s taking himself out, and Phillip isn’t running the game.

03:40: Jeff asks how Brandon is feeling right now.  I guess Brandon’s rant wasn’t enough of a clue to his present state of mind.

03:50: Jeff puts his hand on Brandon’s shoulder, and the two talk about his hostility issues and how they relate to his previous experience on Survivor.

04:24: Brandon proudly states that he hasn’t “cried a f***ing tear on this season.”  He then says that he’s playing with people who don’t care about anyone but themselves.

04:31: Jeff finally gets Phillip involved in the conversation.

04:49: Phillip stutters a response and Brandon mimics him

04:53: Phillip says he tried to embrace Brandon, and proceeds to mispronounce Andrea’s name for the hundredth time in his two seasons with her.

05:07: Andrea starts crying out of nowhere, which Jeff makes a big deal of.  The reigning Miss Survivor manages to blubber out why Brandon and Phillip’s feud makes her so sad.

05:39: Phillip interrupts Andrea, and in turn is interrupted by Brandon who mocks him as a “super spy agent 3.0.”  Brandon tells him to shut up and calls him 100 years old.

05:59: This turns into a hilarious back and forth involving Phillip yelling at Brandon, and Brandon yelling at Phillip to shut up.

06:04: Brandon starts walking towards Phillip, but Jeff stops him.

06:22: Jeff’s arm is now fully around Brandon’s shoulders and the two have another heart to heart.  Brandon says he won’t get physical just for Jeff.

06:39: Jeff points out Dawn’s deep breathing.  She says it’s too stressful and negative.

06:53: Brandon says he loves Dawn and Andrea, but he wants to be the “author of his own fate” (actually he pronounces it ‘Arthur’, but we know what he means).

07:11: Brandon tells the Gota tribe about dumping the rice and beans.  He says that Bikal will now be starving with them.

07:21: Corrine tries to get involved again, but Phillip and Dawn stop her.

07:58: Phillips says he has no idea where Brandon’s meltdown is coming from.  He starts talking down to Brandon and says he’s making a mistake.

08:29: Phillip says that Brandon shouldn’t talk to his elders like that, including his Uncle Russell.  He brings up their exchange from the Survivor: South Pacific finale.

08:40: Brandon says he’s “gonna knock Phillip’s f***ing head off” for bringing up his kids.  He starts yelling at Phillip again and gives him an insane crazy-eyed look.  Jeff restrains him.

09:02: Since the favorites are forfeiting the challenge, Jeff tells Erik Reichenbach to walk the immunity idol over to Gota.  Jeff calls it the easiest immunity ever won.

09:11: Reynold asks Jeff to do the thing he always does with his hands after a tribe wins immunity.  Jeff says, “I’ll give it to you on your way out.”  It’s always great to get an unintentional inappropriate comment from Jeff.

09:24: Jeff says that tribal council is happening right now at the challenge site.  Brandon loudly casts his verbal vote for Phillip.  The rest of the Bikal tribe verbally votes for Brandon.  Not exactly a blindside.

10:08: Jeff declares Brandon Hantz the 6th person voted out of the game.

As maybe the most tense and combative moment in Survivor history, this deserves its own timeline.  When it was all said and done, Jeff told Brandon he loves him.  As he left the challenge arena, he told the fans to kick the favorites’ asses and once again called Phillip a bitch.

While this was extremely entertaining and memorable, I really hope it’s the last we see of Brandon on Survivor.  Sometimes players run their course, and bringing him back after this would be overkill.

Thanks for reading this week!  Hopefully you either were reminded of something you enjoyed at the time or even learned something new about Survivor’s history.  Also, I really enjoyed reading your tweets and comments from last week.  I’d love to see what you thought about this edition @JordanKalish on Twitter and in the comment section below