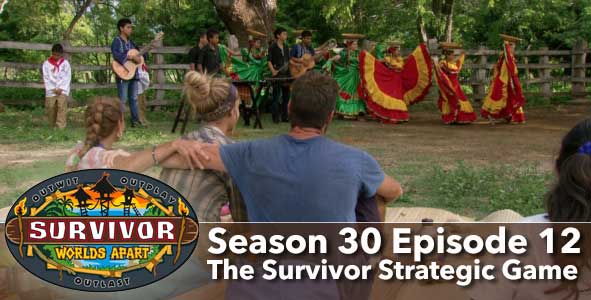 After a series of predictable votes and the demise of the No Collar alliance, we were certain to see a change this week. The six-person majority had to vote out one of its own and removed a threat by eliminating Tyler. This should have been a stunning result that ranked among the big moves of the season. Why did it feel so subdued? It’s possible that we didn’t see enough of Tyler to recognize his status as the prime target. Players talked about the importance of removing him, but we barely saw it. Last week’s crazy Tribal Council set the stage for battle, so this vote felt too easy. Perhaps we were expecting too much? Several players are in good spots, but that doesn’t always lead to amazing strategies.

Tyler played an interesting game that kept him off the radar for a long time. He made solid alliances, was well-liked, and didn’t rock the boat. His game provides a solid model for how strong guys can approach the pre-merge portion. He made a tight alliance with Carolyn and avoided the target even when allies like Joaquin were eliminated. The careful approach didn’t lead to much screen time but served him well. If he’d made the final Tribal Council, I expect that Tyler would have made a quiet and well-considered argument about why he deserved to win. Mike was right to point out the danger in keeping him. Tyler wasn’t the power player running the game and still found a way to secure a safe position. 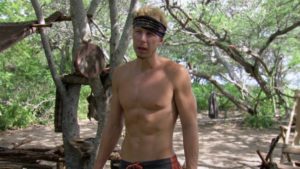 Tyler waited too long to make his move.[/caption]

What could Tyler have done to change his fate? The obvious answer is winning immunity, but that isn’t a great long-term strategy. What Tyler needed was tighter allies within his group. Carolyn wasn’t ready to sacrifice her game for his benefit, and the others had closer bonds. Rodney had been with Will since the merge, and both of them were close with Carolyn. Sierra and Dan had been on the same tribe since the start of the game. Tyler’s status as the swing vote at the merge placed him in a precarious spot when he joined the alliance. Unlike Carolyn, he wasn’t able to put together a core group to protect him.

It’s possible that there was no escape route. Threats like Joe and Jenn were gone, and Tyler had no place on this goat island. Why remove people with no chance to win? When you’ve played a careful game, it’s hard to flip the switch. Tyler had come this far using his strategy, so following the same path made sense to him. Dan’s advantage was a reason to remove him but not enough to save Tyler. In his interview with Rob, Tyler spoke about wishing he’d used info on Carolyn’s idol and Dan’s advantage to save his skin. He recognized the danger but felt it would come a little later. Timing is crucial on Survivor, and Tyler waited a bit too long to step up his game.

Mike used smart tactics last week to reveal cracks in the alliance, and he seemed poised to exploit them and secure new bonds. Instead, he essentially took a nap and let the others battle. This was lazy gameplay from a guy with a free pass to make something happen. Mike bonded with Carolyn and Sierra at the reward, but I didn’t get the sense it would connect them in the future. Carolyn toyed with the idea in confessionals, but it felt more like she was playing for the camera. The votes went 4-3 for Mike to ensure he played his idol, and he wisely took the safe route. It confirmed his choice to keep the idol last week and will give him a chance in the final six. Even so, he still feels like the main target if he loses immunity.

Dan seemed like the obvious guy to pursue after Tyler and Will put his name down at last week’s Tribal Council. There was clear dissension at camp following the vote, and all Mike did was gloat about his safety. I’m sure it’s a relief to get a break from scrambling, but there’s still more game to play. The shot of Mike sleeping on a rock on the beach was a fitting metaphor. He was comfortable at the time, but it’s hardly a great spot for a long-term residence. He did spot the cracks in Rodney’s silly plan but didn’t try to turn the tables. In an extra scene, Mike even said that he wanted to vomit on Rodney. Mike looked content to remove Tyler and was confident he could relax for a bit.

The post-Tribal chaos offered an interesting look at how each player dealt with the turmoil. Dan had anticipated the blowback and wrote a star next to his vote; Carol had suggested that Tyler and Dan voted for each other. Will pushed to not fight, which was interesting after his behavior in the past. He did ultimately reveal his vote to Dan, who replied by kissing him on the cheek and saying “You and I are going far.” I can only surmise that Dan believes Will is a goat and needs him, but it was strange regardless. Tyler pinpointed Dan as “extremely loyal”, and that might explain his inability to realize his place. Of course, you could say that Tyler’s exit confirmed that Dan wasn’t really in such a bad spot.

Another reason for Tyler’s quiet exit was the edit, which focused on Rodney’s birthday melancholy. I once got stuck working from eight a.m. until midnight on my birthday and then did the same thing on the day after it. I can’t imagine playing Survivor was worse than that day. Once Rodney started talking about being taken on the reward, you knew it wouldn’t happen. Dan nearly led them to a surprising win, but having Will sit out ruined any chance of someone giving up a spot. It’s easy to criticize Rodney for going nuts. He surmised that he might be having “the worst time in Survivor history” in an extra scene. On the other hand, he was dealing with a lack of food and sleep while under a lot of stress. Plus, it was all worth it to see the world’s greatest confessional. Rodney’s grumpy interview while under a downpour was brilliant. It was like The Truman Show with the editors dumping water on Rodney with buckets while he complained.

Rodney’s focus on rewards didn’t make him any friends on the island. A secret scene offers more footage of Rodney coercing people into taking him because it’s his birthday. Even if it works, the others won’t respect a guy who uses those tactics. You did get the sense that people wanted to help the guy; they’d just prefer to not be strong-armed into it. Slipped into Rodney’s rant was a funny impression of Carolyn that was pretty accurate. Even when he’s miserable, Rodney is still pretty endearing. I don’t expect it to help him if he makes the end, however. You could sense that the rest of the tribe was annoyed with Rodney, and people rarely give the million to players that irritate them.

So what is Rodney’s story? His anger at Carolyn might sever their bond; she’s the next largest threat behind Mike. Would Rodney betray her and try to make the end with Dan, Will, or Sierra? Anything is possible, though it’s hard to believe he could win. Rodney is a great character and hasn’t played a bad game, but he didn’t look sharp. The plan to trick Mike probably sounded brilliant in his head, but we’ve reached the part of the game where brains stop working clearly. It’s the time when players give away immunity and are blindsided by allies. Rodney may not have enough mental energy left to choose the best path to the end. Tyler and others had no interest in joining the plan.

Next week’s preview describes the alliance crumbling, which makes sense with only six players remaining. They can see the finish and will work for the endgame. Mike should remain the prime target, but someone looking to make a move could use his vote. The question is whether that person is willing to battle him in front of the jury. Someone like Dan (and his extra vote) could work with Mike and set up a spot in the finals. On the other hand, Dan can at least argue his case against Will and Sierra. He’d get slaughtered against Mike or Carolyn.

Another big factor is Carolyn’s idol, which is a complete mystery now that Tyler’s left the game. If she can survive the next vote, she’ll be guaranteed a spot in the final four. Carolyn shouldn’t take chances and hold the idol for too long, however. If there’s even a small chance for her to leave next week, she should play the idol. She’s a challenge threat against everyone (including Mike), so running the table from the final five isn’t impossible. Carolyn should focus on removing Mike, which is a move to sell to the jury as the reason for giving her the prize. If the idol helps to spur his exit, that makes the case even stronger.

Carolyn: She’s fought hard in every challenge and deserves attention, but I don’t believe the others are scared of her. Carolyn has a tough personality, and people might think that will hurt her chances. On the other hand, she’s a fierce competitor and has played a game that’s worthy of the top prize. The biggest obstacle standing in her way is Mike, so taking him down in the next immunity challenge should be her priority. The votes this week showed that Mike is the target, so Carolyn must ensure that he doesn’t work his way back into the alliance. An extra scene about the challenge reminded us that Carolyn is also a super fan. She cites past winners, and that knowledge supports the idea that Carolyn knows this game and could win.

Dan: The obvious answer here is Mike, but he might seem less threatening without the idol. Carolyn knows what Dan’s advantage is and might tell the others about it. Dan’s extra vote becomes stronger at the final six and could be deadly if he survives this vote. At the final five, Dan needs to only bring in one ally to gain a 3-2 edge. Dan should do one of two things: 1) Hope that Mike doesn’t win immunity or 2) Make an alliance with Mike. I don’t see Dan making the second choice because of his stubbornness. Therefore, he must stay close to Rodney and Sierra and keep talking about removing Mike.

Wednesday’s big announcement created a strange environment where fans are looking towards next season. The remaining two episodes almost feel like an afterthought, particularly with so few power players still in the game. Mike and Carolyn both made the list of options for season 31, but that doesn’t mean one isn’t a decoy. Sierra is the most likely third option if they fall, but I don’t expect to see both Mike and Carolyn leaving before the end. One of them will probably sit next to Dan or Will (possibly both) and win a lopsided vote. There’s always a chance for a surprise, but it’s tough to ignore the edit. I believed that Tyler might still win despite his edit, and this week proved me wrong. The ultimate winner is probably the person who wins the upcoming immunity challenges, and that isn’t very exciting.