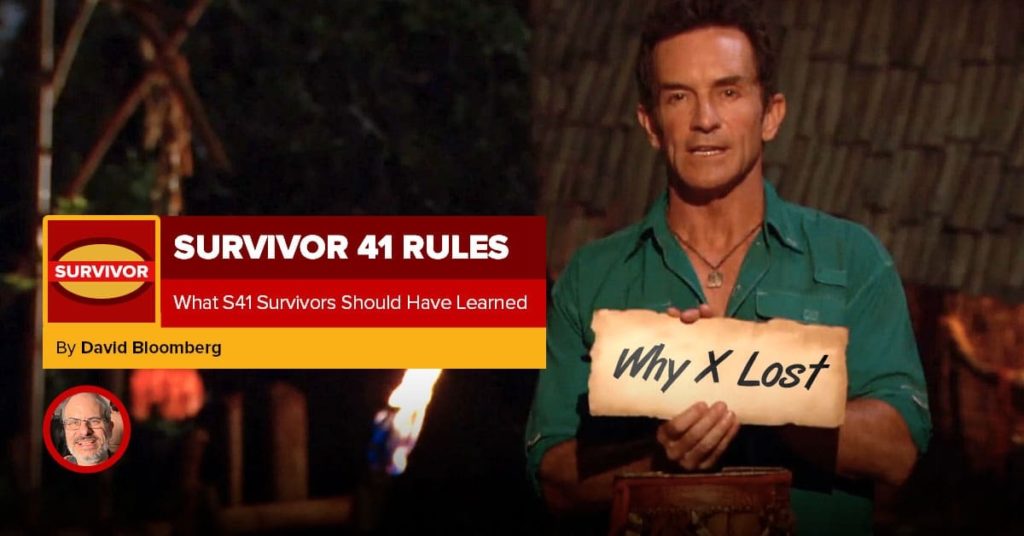 Make Your Votes Count – Keep in Mind Your End Goal

This used to be the infamous Rule 7 that was referred to as, “Vote Off the Weak Then the Strong Then the Weak Then the Strong.” And it took quite a hit in Game Changers, largely because it was an all-star season that in many ways didn’t conform to the usual patterns. Players were often more concerned about voting out the big threats far earlier than usual, while outside relationships and pre-game alliances came into play as well.

To address this discrepancy and to also provide a bit more clarity to a rule that confused listeners more than any other, let’s talk about this rule in the way it was originally intended – as a guide for players to remember that they need to vote in a way that moves them along further in the game and sets themselves up to win later. And because it’s a guide that is examined for the players remaining in the game rather than a rule that generally applies to the person who has just been voted off, I’ve changed this into an Appendix.

But no matter where it is, the general point still remains. In the beginning of the game, players should generally want to vote off the weak. In the middle, after the tribes have merged, vote off the strong. Then vote off the weak again. Finally, get rid of the remaining strong contenders. In each case, “weak” and “strong” need some definitions, and actually mean different things at different stages.

Early on, the weak are those who will hurt your tribe’s chances in the immunity challenges or who will cause divisions in the tribe that will overall weaken the group dynamic – which will in the end hurt just as much as losing challenges. Even though there will certainly be some more mixing of alliances and tribes, the best bet for staying around is still to have a larger cohesive tribe going into the merge. By winning the immunity challenges, your tribe stays strong and you stay away from Tribal Council. Even the reward challenges can keep you on your feet.

Recently, too many players have wanted to keep weak players around because they’re supposedly easy to get rid of later. The problem is those players often know they’re at the bottom and will flip at the first opportunity. Also, they take away a spot later in the game if they get dragged along. Rob has been saying the new “good at Survivor” is being bad as Survivor, but we do have to remember that these rules are about winning, not just getting to the end. Still, I’ve often noted that you can’t win if you don’t get to final three so at least this can put someone in that spot.

Admittedly, there is something to be said for not worrying about voting off the weak early on if you know that tribe-swapping will occur at some point. Instead, keep an alliance partner – which should almost always be your top concern. This is not something you generally want to do at the first or second vote, because odds are against a swap happening so quickly.

Later, though, when the tribes merge and it’s every man, woman, and voting bloc (a term I used here way before the Second Chance season, by the way) for him/her/itself, it’s definitely time to vote off the strong who are not part of your alliance. If they are allowed to stick around, they will hurt your chances. I say “when the tribes merge,” but recently, such votes haven’t occurred right at the merge itself. Sometimes it’s a vote ahead of the expected merge, sometimes it’s shortly after. Now it’s no surprise if the actual merge vote is someone who is more of an easier consensus pick to kind of ease into the merge. In many ways it’s like the very first vote of the season when people are just happy if it’s not them. But the overall point still stands that it is around this time that players should be voting out the strong.

Here, “strong” has varied meanings. It can mean those who are literally strong and thus able to win the physical reward and immunity challenges. If you boot them when they are vulnerable, you won’t have to worry about them later. But “Strong” also means those who can organize others. Going all the way back to Season 1, the former Pagong tribe members almost managed to boot Richard, the glue of Tagi’s alliance. They missed by a vote because they didn’t catch on until it was too late. If they had moved a little sooner, things would have been much different. Also, “Strong” can describe someone’s social game or their ability to blend into the background if allowed.

You need to go back to voting off the weak again after the unallied strong are gone. In this case, “weak” means the stragglers. These are the members of the herd who are left over with nobody to protect them. Way back in the first season, Gervase and Colleen were absolutely right to call themselves a target and a sitting duck, respectively. They had no protection, and they knew it. They were weak, and they were removed by the alliance. And we see it all the time now – except, of course, when those so-called weak players worm their way into a new alliance and break apart the core. That’s a good reason to get rid of them!

Once the stragglers are properly disposed of, the next step should be to remove the “weak” members of your own alliance – those who can be plucked out without completely fracturing it apart. In a way, it’s like pulling cards out of a card house. Some can be removed without causing much of a problem. Others cause the whole thing to collapse like, well, a house of cards. This is not always an option.

After the various weak members are gone, you need to refocus on the strong. In this case, the strong are those who are members of your own alliance but threaten your chance in the end, either because they can win the immunity challenges or because they are popular with the future jury. This is where the rule about being too much of a threat comes into play. Unfortunately, this is not an easy task because the fact that they will be popular with the jury may mean they are popular with the rest of your alliance. You need to be careful or else a suggestion like this could rebound and you could be the one voted out. See Deena’s attempt to oust Alex too early in Amazon. Still, it is in everybody else’s best interest to get rid of such people.

With all of this said, there will be times when it makes sense to deviate from this path. As I said, it’s almost always more important to keep a strong ally than to worry about whether they are weak or strong. And sometimes there are strategic reasons to get rid of a strong person early in the game or a weak one later.

One of the most important points to remember is that in the end, you want to be better thought of than the people left with you in the final three. If the jury compares you and somebody they like or respect more, you’re going to lose. With some juries, you want to be the most liked; with others, the most respected. In a recent example, Woo was never going to be the most respected player when he faced Tony, and that jury was simply not going to go solely with being a likeable guy.