Read on to find out what happened… This Week in Survivor History!
April 24th, 2003 (11 years ago this Thursday) 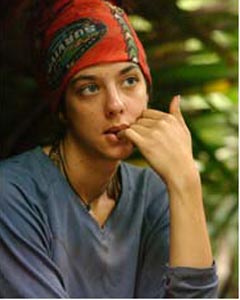 Upset over letter from home.[/caption]

The last time we saw the cast of Survivor: The Amazon, Deena Bennett had just been blindsided at the final 8 and a new power group of Rob Cesternino, Alex Bell, Jenna Morasca, and Heidi Strobel had been formed.  They had the majority over Matt von Ertfelda, Butch Lockley, and Christy Smith and weren’t afraid to show themselves as a tight 4.  In one scene, they were lounging around camp while Matt and Butch went on their daily fishing and firewood gathering trips and Christy did whatever.  I even have it on good authority that plans were made to open a Sonic after the game was over.  They were so close, that Alex felt comfortable enough to tell Rob that he’d vote for him at the final four, being that the girls were so close and would never vote for each other. He was considerate enough to give Rob permission to vote for him when the time came.

Unfortunately for Alex, complacency with fourth place was not part of Rob’s game plan.  After winning individual immunity in the often repeated cast survey challenge, he gathered up the misfits and blindsided the cool-kid Alex, again turning the game on its head.  If you’re wondering why there isn’t a Sonic run by four Survivor: The Amazon contestants, this vote has a lot to do with it.
Jenna and Heidi were of course livid at Rob for betraying their alliance, but they really should blame Alex.  It’s no crime to think of someone as the fourth person in your alliance, but letting that person know about it is a cardinal sin of playing Survivor.  So many players have made this mistake and paid dearly for it.
This was also the episode in which Jenna and Heidi got really mad at Christy for outbidding Jenna for a letter from home during the auction.  Alex wasn’t the only one who showed arrogance within that former majority alliance.
April 21st, 2005 (9 years ago this Monday)

This episode of Survivor: Palau went from bad to worse to controversial for Janu Tornell.  On a food reward, she puked out her much needed nourishment.  When her teammates from the reward challenge brought back food for the rest of the tribe, she ate some of it!  People had previously broken reward etiquette before, such as Neleh Dennis from Survivor: Marquesas bringing back a chewed mint for her whole tribe to share, but this one takes the cake.  Coincidentally, Janu would have taken cake from the rest of her hungry tribe if it had been available.

The immunity challenge was the one in which contestants have to breathe through a grate while submerged in water, with the last one to bail out winning.  Janu bailed before anyone else and, per a caveat attached to this particular challenge, was sent to Exile Island for the night (a season before the moniker ‘Exile Island’ actually existed). Secluded from the rest of her tribe, she seemed to thrive for the first time.  I specifically remember a lot of dancing and spinning around, and her equating the experience to a spiritual awakening.
Unfortunately, the time she had to clear her head didn’t increase her desire to continue playing the game.  At tribal council, she told her tribe that there was no reason to keep her around anymore.  She laid down her torch and quit the game, saving Stephenie LaGrossa in the process.  Stephenie was of course the one remaining member of the former Ulong tribe, and was the obvious person on the chopping block due to her status as both an outsider and a threat.  Many Survivor fans blame Jeff Probst for aiding her quit in order to save a more interesting and viable player.  I don’t know if Janu would have stayed in the game had Jeff acted differently at tribal council, but it was evident that she wanted out.  My guess is that she would have quit no matter what Jeff said or didn’t say that night.
April 20th, 2011 (3 years ago this Sunday)

On Survivor: Redemption Island, what started as a rice argument turned into a race war.  No merged tribe has ever been divided down former tribal lines like the Murlonio tribe on this season.  The former Zapateras and Ometepes didn’t just vote against each other at every single tribal council.  They slept in different sections of the shelter, weren’t allowed to talk to each other in private due to Boston Rob’s buddy system, and ate from different food stores.  They were like the Montagues vs. the Capulets or the Culpeppers vs. the Codys.  The fact that they kept their rice separate served as the catalyst for this heated feud.

After they found maggots in the Ometepe rice, reigning Miss Survivor Andrea Boehlke asked Steve Wright if they could combine rice after the spoiled food was thrown out. Steve and the Zapateras said no, which sent Phillip Sheppard on a tirade.  He yelled at Steve, threatening to hide the Zapatera rice while they weren’t looking.  He also called himself the Chief of Counterintelligence and an expert at Weng Chun Kung Fu.  It’s really amazing that Phillip stayed in Stealth R Us mode during this argument.
In a confessional, Phillip called it eye opening to see how individuals are behaving in this game.  He of course said this while wearing only pink underwear and a feathered headband.
The rice war became a race war after Steve called Phillip a lunatic.  The Specialist played the race card, equating Steve’s questioning of his sanity to using the ‘N’ word. It’s pretty interesting that Phillip goes on about the connotations between the word ‘crazy’ and racism, but Steve never actually said crazy, at least on the edit.
This was definitely one of the most uncomfortable confrontations in Survivor history. While it appears that Steve had no racial meaning behind his criticism of Phillip, the fact that it became an issue is pretty unfortunate for something that is normally just a game.  Boston Rob gave a great confessional after it was over in which he said that the fight made Phillip public enemy number one, and that he just needed public enemy number two to go to the end with as well.  The great ones always remember that the game never stops.
Memorable Firsts:
Memorable Boots: