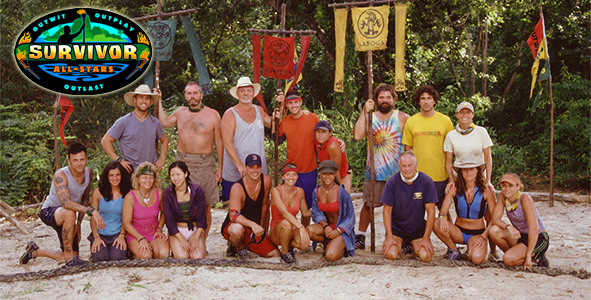 Previously on This Week in Survivor history… Russell went out with a bang on Redemption Island, Kathy peed on John, and Brandon threatened to do the same to the rice. Shane finally got to smoke, and Penner’s Micronesia story ended with a medevac. Read on to find out what happened… This Week in Survivor History! 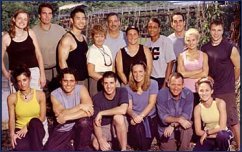 Typically I talk about a particular moment, but this entire episode from Survivor: The Amazon was fantastic. Great challenges, great Probst-isms, and a very interesting tribal council.

The reward challenge involved a contestant staying on a spinning wooden log longer than a member of the opposing tribe. The matchups were all man vs. man or woman vs. woman. They’ve used this challenge since, and it’s always been one of my favorites.

In the Amazon, it was particularly memorable. Firstly Butch Lockley, not known for his physical prowess, defeated both podcast host Rob Cesternino and extraterrestrial challenge-beast Matt von Ertfelda in their individual battles. To be fair, it would be tough to beat Butch in anything involving a large piece of firewood. He actually burned down the challenge apparatus in a secret scene. Secondly, the editors gave Christy Smith extremely heroic music as she beat her nemesis Jenna Morasca in one of the first few rounds of the challenge. This came on the heels of Jenna supposedly excluding Christy when the two were on the Jaburu tribe. Christy was again the hero as she outlasted Jenna in the final round to clinch the challenge win.

Unfortunately RHAP wasn’t around back then, but if it was, the interns would have had a field day with the following Jeff Probst comment: “Heidi in, Shawna still on and not wet!” Of course he was referring to Shawna Mitchell staying on the log longer than Heidi, but it’s always fun when Jeff says things like this. The unintentional inappropriate comment would serve as an appetizer for those that would come during the immunity challenge. Stay tuned…

The episode’s immunity challenge forced the Survivors to take on a huge, swinging piece of meat. Two hunks of meet, one for each tribe, dangled above them by the bone. The goal was to rip off as much as they could in the allotted time and spit the pieces into a bowl. The tribe with the most meat in their bowl would win immunity.

This had to be one of the most disgusting challenges in Survivor history, yet I couldn’t look away. Their faces were covered in meat and barbeque sauce, we constantly saw them trying to spit beef into the bowl, which half the time was stuck in their teeth, and it made for some interesting accidental make outs involving Roger Sexton. I’m guessing he enjoyed his meat-filled kiss with Heidi Strobel more than the one with Butch.

As I said before, this challenge would feature multiple Probst-isms. These are perhaps some of the best in Survivor history:

Wow! These sound like they could have been from Jenna Lewis’ honeymoon video (NSFW).

When the challenge ended, Deena Bennett was aptly banged in the head by the huge piece of meat. Tambaqui proved to be better at spitting into the bowl and won immunity, leading to an entertaining tribal council later that night.

Going into the vote, we knew it would be either Matt or Shawna going home. The entire tribe actually had an open conversation about it in the shelter, which would have made Garrett Adelstein very happy. Rob had a great confessional talking about his recent, exhausting efforts talking to Matt and getting him on his side. He didn’t want to vote him out after all that hard work. After listening to this, I also noticed that Rob’s lost a lot of his New York accent. I guess LA will do that to you.

At tribal council, there was a lot of talk about the sexual tension between Shawna and Alex Bell and peoples’ roles within the tribe. Matt said he was the provider, Shawna couldn’t really come up with a role for herself, and Rob said he’s the entertaining jokester who comes up with games and sings funny songs. Is it really any surprise that RHAP was born?

In the end, Rob got his wish and Shawna was voted out. As he voted, he said she was a really nice person who puts others ahead of herself, which makes her a terrible Survivor player.

Like every pre-merge episode of Survivor: Palau, Ulong started the show down one member from the previous episode. This is due to the fact that they lost every single immunity challenge. They sucked at challenges, but you’d think they’d at least know the way back to camp from tribal council.

Despite making the trip 4 times in 12 days before this night, they somehow got lost in the dark. The most dysfunctional tribe in Survivor history (that title has since been challenged by Matsing and Luzon) had found a way to top their incompetence. This was the Survivor equivalent of the Chicago Cubs getting lost on their way to missing the playoffs or Ted Mosby forgetting how to screw up a relationship.

A few weeks ago, I wrote about Colton convincing his tribe to give up immunity. Since then, he had proven to be a skilled strategist, knocking off adversaries in three straight episodes. It didn’t seem like anything would stop him from becoming the main strategic threat to Kim Spradlin once the tribes merged.

Unfortunately, Dr. Tarzan diagnosed him with signs of appendicitis.

Luckily for Colton, a doctor without nominal aphasia was on the island as well. Dr. Ramona of the Survivor medical team came to the Manono beach to check him out. It’s kind of unclear if Dr. Ramona pulled Colton from the game or if Colton quit due to his symptoms. At the time it seemed like the doctor made the decision, but based on Jeff’s comments when Colton quit Blood vs. Water, he may have quit his first season as well.

It was very hard to feel bad for Colton, like I would for most victims of medical evacuation. Earlier in the episode, he and Alicia treated Christina pretty badly, constantly making fun of her for what they considered bad gameplay. This was of course only a few weeks after making racist remarks towards Bill Posley. Colton’s strategic prowess may have gotten him pretty far in the game, but I don’t think he would have had any chance to win. One of the categories on the famous Survivor Venn diagram is the social game, and alienating potential jurors is social suicide. Even after he was taken out, he decided to keep the hidden immunity idol as a souvenir instead of giving it to someone he was close with.

Later in the episode, both tribes were sent to tribal council, thinking that they’d be voting someone out. Instead, Jeff informed the remaining Survivors that they were merging. The funniest part of this episode was Kat Edorrson not knowing what appendicitis was and freaking out about Colton having it. She became even more worried by the fact that some of her other tribe members had experienced it in their lifetimes.

First recap episode of everything that had happened on the season so far. I hate when they do these. Two weeks is way too long to wait for the next real episode! (March 22nd, 2001 – Survivor: Australian Outback)

Lex van den Burghe votes out former ally Ethan Zohn. I guess getting voted out by your pre-game friend doesn’t suck until it happens to you. (March 18th, 2004 – Survivor: All Stars)

After a season-long feud, James “Rocky” Reid outlasts Anthony Robinson, helping to vote him out in a fiery tribal council. (March 21, 2007 – Survivor: Fiji)

The bearded Matt Bischoff voted out after the tribe swap. I would have liked to see what kind of player he’d become after the merge. (March 20th, 2013 – Survivor: Caramoan)