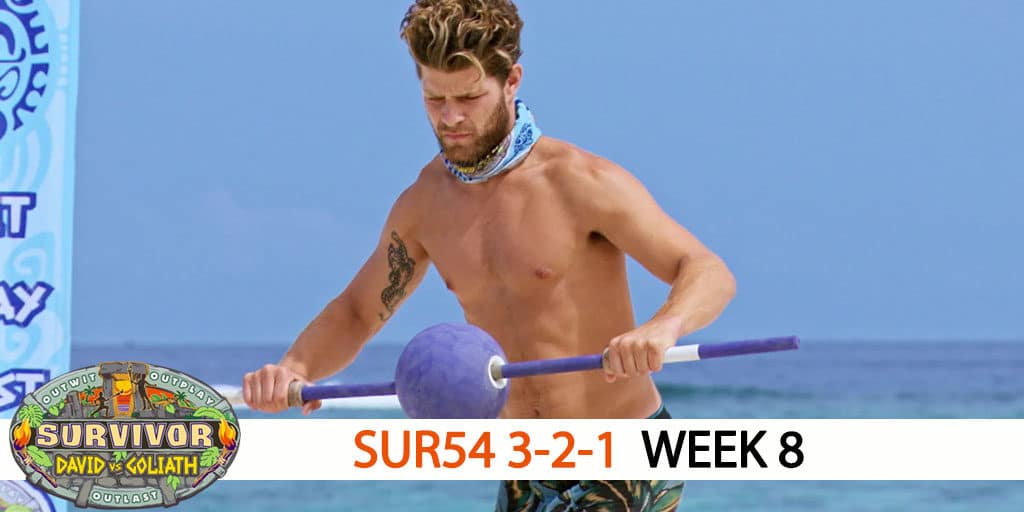 Time to pour one out for the citizens of Slamtown.

Without a doubt, Johnny Nitro goes down as a positive addition to this Survivor season. He defied expectations and proved that he was able to play a game with meaningful connections and steady strategic maneuvering. For a few weeks, many of us had been considering whether or not John could’ve been a potential winner. Imagine a guy of John’s size and profession winning? It seemed highly unlikely, but he was doing well enough that it was a believable outcome.

Now listen, I don’t want to get too ahead of myself… but this season is mother forking great. There’s still time for the wheels to fall off, but I certainly have seen enough to trust that the editors, producers, and cast have it all right this season. So maybe I am getting ahead of myself, but I think I can say David vs Goliath is already looking like it’ll be one of my top 10 favorite seasons and I would not be surprised to see it climb high up the list. Again, let’s not count our chickens (morris) before they (richard) hatch, but we’re very surely trending upwards.

Last week, I featured Angelina, Gabby, and Alec here, who have taken a step out of this week’s blog. Angelina had another hell of a week; her game continues to be a wild rollercoaster, entertaining every step of the way. Gabby was quiet this week, but I still find myself high on the spot she’s in within this group of Davids, especially given that they’re about to be back on the up-and-up. As for Alec… it does feel like things may blow up in his face one of these days, but I’m happy to sit back and enjoy until then.

While many others have struggled to earn a spot up here in the top 3 (you know, I heard players these days only go on Survivor to get a top 3 spot in this exact blog.. yeah, I couldn’t believe it either), Nick has mostly kept his hold on top of the competition all season long. The comparisons to JT 1.0 started as early as episode 2, from Nick’s own mouth. The longer he stays in the game away from harm and off the radar, the more those two players blend together.

Nick couldn’t have asked for a better week. He and his David pals got together and found the vote-steal advantage. While it may not be the top pick on the board of “Advantages You Want To Find” due to its cursed past, surely you would rather it in your hands than somebody else’s. Nick also benefited from his growing relationship with Alec by learning that the Goliaths were planting a target squarely on Christian’s back. As we saw, Nick shared the information with Davie and they were able to take out somebody from the Goliath majority AND burn one of their idols in the process.

I could’ve given Davie a spot in the top three solely based off of his flawless distraction tactics while Nick and Carl found the palm tree advantage. I know a lot of editing goes into this show… but I’m going to assume everyone was eating up that happy-dancing and it truly did help the guys go searching.

Davie was the MVP of this episode. His idol play was perfect; it was the kind of play that most Survivor players would not make. Immunity idols are advantages in the game that very often can be more beneficial if played in a way like Davie did rather than waiting until you absolutely need it for yourself. Because once you need it for yourself, go ahead and play it… but you’ll probably just go out next week unless your name is Ben Driebergen.

Davie may have been M-I-A-vie last week, but he came back full force and led his alliance to a victory that puts them in a position to take back control of the numbers.

Not the most exciting week for my guy Carl, but I thought I’d go ahead and round out the top three with the three guys who really elevated the Davids to this week’s victory. Last week, Carl identified the target he was hoping to take out, Elizabeth, whom he apparently had a bad relationship with. He was successful then, and this week was very much in on the advantage finding and Tribal Council blindsiding alongside these other two guys.

Can Carl win? I don’t think so. The competition in this season is just too good. But hey, he’s hanging on and getting the job done.

I’m not sure if Dan is going to stay in the bottom two here until he’s ultimately voted out, but it sure seems that way. Dan’s game has not been impressive enough to make me feel comfortable that he’ll be able to maneuver past all of these other advantages being picked up by the Davids. His game is just all over the place. One minute, he’s telling us that Angelina needs to go at the first opportunity they get… and the next he’s playing an idol on her.

I get the feeling that Dan isn’t planning ahead. As far as we can tell, he has no real gameplan for the next few steps other than “lets try to get more Davids out”. (Unlike other Goliaths who have been putting in significant effort in keeping the Davids close.) Plus, it looks like things will get even messier for Dan next week given the previews of Kara potentially flipping, so buckle up kids!

Mike’s main objective with this vote was to take out Christian, somebody inside of the Strike Force alliance that Mike himself created only just a few days prior. Is making an alliance and immediately breaking it really worth it just to take Christian out now? I understood the reasoning behind Christian being a bigger threat than Carl or Davie… but you just aligned with this guy!

The move shows everyone else in the alliance (especially if had worked..) that Mike is playing hard and not committed to any loyalties. We didn’t get a single check in with the Rockstars this week. It was Alec who informed Nick of the Christian plan, and that doesn’t give me with any confidence that Nick will have Mike’s back moving forward.

I haven’t been able to find a great time to work Alison in here, but given there were a couple of less-featured players in this week’s episode, I’m taking the opportunity to hand-pick Alison out and check in with her.

Until last week, John was my biggest wildcard in the game. I didn’t fully understand where he fit in… and it turns out that’s because he didn’t fit in at all. I’m looking at Alison in a similar way this week. On paper, she seems to be set up really well. Her connection with Gabby should keep her safe from the David’s slingshot, but with the Davids firing anywhere to try and land a shot without hitting somebody with an idol, she may not be as safe as I’d expect.

The future of the Strike Force is certainly not looking great. With Mike turning on Christian, it’s probably as good as dead. But speaking of Mike, that perfect spot he’s been in (supported by all Goliaths.. bases covered with the Davids) may be transitioning to Alison. Don’t forget, it wasn’t too long ago that Alison was discussing her desire to take Dan out of the game. If the plan is forming to make that happen this week, we’ll probably see Alison back on the right side of the vote.