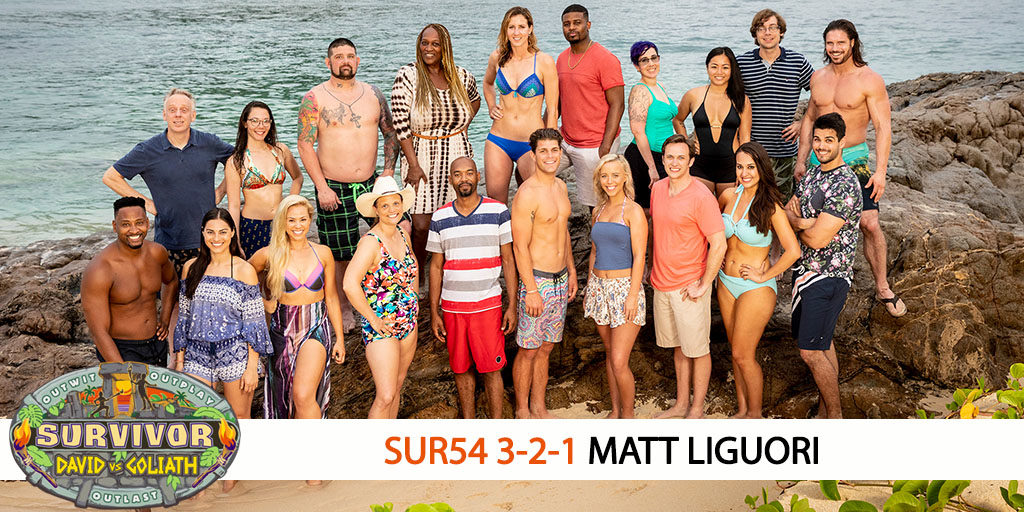 Welcome one and all to a brand new blog here on Rob Has a Website! Okay, maybe it’s not brand new, just remodeled. For the past year+, every week during a Survivor and Big Brother season I’ve put together my power rankings of the players remaining in the game, more often than not with a weekly guest.

Well it’s time to change things up. I’ve often felt that in a Survivor season, there just isn’t a whole lot to say about each and every player week-by-week. I’m excited to try something new and if you’ll be here checking it out, I hope you enjoy the new format and continue sticking with me!

SO, what’s this all about? Welcome to the Survivor 3-2-1! Each week I’ll be giving you my top 3 players, bottom 2 players, and 1 player to watch. So we’re still working with some element of rankings over here, but don’t expect to hear a lot about those purple people unless they either start playing the game or look like they’re in trouble. Should be fun!

As for the guests, there unfortunately will not be any. I’ll be honest, there’s a good amount of competition out there to get the good guests. Rather than stretching these guys out for their takes, I’ll leave the would-be guests to all of the various podcasts we’ll surely be hearing them on throughout the season.

It’s a quick, easy read we’ve got going on here now, so no excuses for not stopping by! I’ll be here every week with a new 3-2-1, so keep an eye out on robhasawebsite.com and follow me on Twitter, @mattliguori. Would love to hear from you guys about what you think!

Angelina seems like she has the natural abilities to be a great Survivor player. She’s intelligent, she seems friendly, she goes to workout classes in her free time which hopefully means she’ll hold her own in challenges. I don’t see a ton of strategists in this cast, and I feel like Angelina will be someone who easily gathers a group together and is able to set a plan into motion for them all. Plus, having a past winner as a good friend can only be helpful, right? I’m sure Adam gave her some good tips to run with.

It’s kind of funny that Carl is a truck driver, because my call on him is that he’ll be sitting in the passenger seat for the majority of this season. Carl seems like a guy who will be well liked by everybody and find himself a spot in the final 6 or so. He’s set up well, being strong enough to help his tribes early on, but (at age 41) “old” enough to not be perceived as a big threat coming down the home stretch. Then once we get down to those final immunity challenges, I see no reason why Carl can’t pull out a clutch victory (in the spots where Keith Nale could have) to get himself to final 3 and ultimately win the game.

Younger contestants in recent years have all gone deep into the game. Will, Julia, Michael, they all at the very least make the merge. I think Jessica will follow suit and have no problem making it past the first stage of the game, especially given the rave reviews she’s received in early press interviews from other players. If everyone wants to bring her in and work with her, that’s as good of a start as you can ask for. Jessica thinks she’ll be overlooked and underestimated; I agree and I think that’ll work well for her. Jessica also gets bonus points from me for the Steph LaGrossa shoutout.

Natalia’s bio scares me a little bit. She talks about how she’s blunt, how she knows how to get what she wants, has a lot of pet peeves which will likely be a problem for her out on the island. She also seems very energized and ready to dive right into the game, leaving me worried that she’ll be a classic case of playing too hard too fast. If she is as confident and charismatic as she says, she’ll probably prove me wrong, but the red flags have me feeling down on her chances.

So this guy was the inspiration for the David vs. Goliath theme? Interesting. If things go as I’m guessing they will for Pat, producers may have to treat him to some extra special dinners and adventures during the pre-jury trip as a thank you for the theme inspiration. Pat just doesn’t seem like a guy who can blend in easily. He’s going to stand out and unless there’s somebody who takes him under their wing to count on him as a number, he seems like a prime early target as someone who doesn’t vibe with the tribe.

If there’s one thing we’ve learned in recent years, it’s to have confidence in your superfans. Their knowledge of the game up against a bunch of recruits is always going to work in their favor. As long as they aren’t a nightmare to live with, they generally go pretty far. I get the feeling Nick is dying to get out there and win the game, so for that competitive drive and years of fandom, I’m going to be watching out for Nick as this season plays out.