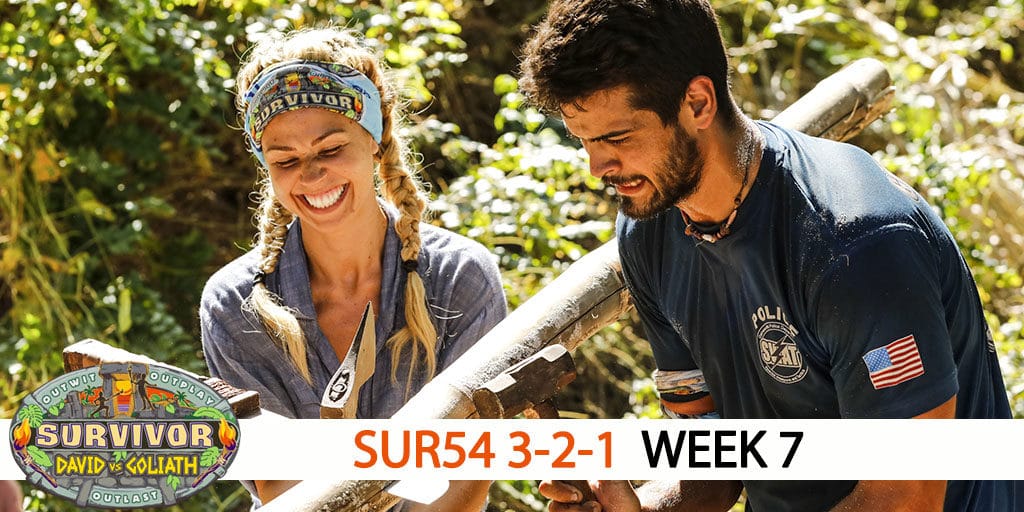 Ghost Island may not have had it all, but one thing it did have was an amazing merge episode. David vs. Goliath has already been great, but it had a lot to live up to for this merge episode… and I really think it delivered. There were 13 players going into the episode, and coming out of it I feel like we now know something about every single player’s story and/or gameplay.

With that said, I do have to point out somebody whose story seems to have stopped in its tracks.. given they were just in last week’s top 3! Davie was nowhere to be found at this merge. Like…. nowhere. I think I saw him at the immunity challenge, but not once at camp or Tribal. So I suppose Davie’s game may not be progressing as well as I had thought it would, but hey I still like the guy.

Another follow up from last week… Johnny Nitro. John had a good episode! He remained level-headed, listened to opinions from all sides, and calmly approached Angelina when the plan was changed back and was able to relay the message without taking any of the blowback. This week’s top 3 was very close for me. If this were still a power rankings blog, I imagine I’d have John at #4.

And at #5… Kara. I think the protection from Dan as a meat shield and Dan’s idols potentially helping her out have her in a great spot. I’ve been feeling great about Kara and I think she’ll find herself back in the top 3 soon enough.

Nick’s merge episode was subtle but effective. He said it himself, he was minding his own business and ended up being invited into a brand new alliance. It’s clear that Nick is well-liked out there; I haven’t heard a single person talk negatively about him since the premiere. His social game seems to be on point and his strategic game has been as good as you could ask for.

I don’t know when I see anybody taking a shot at him. Perhaps they don’t see him as a threat? I’d imagine he’s kept his superfan card hidden for the most part, but either way he’s protected on all fronts. Christian and Gabby, Rockstar Mike, and now the Strike Force are all keeping him from harm’s way. Nick isn’t going anywhere.. and coming out of the merge, I have him as one of my top two picks to win the game. (The unranked Kara being the other.) (Also, I’m never right about these picks, so I guess I’m sorry Nick and Kara, because now you’re definitely not winning.)

Mike also quietly had a good week. The formation of Strike Force (which seemed to be largely his doing) was a great way to solidify his place in the game. Mike now has protection from the Goliaths, the Strike Force, and individually from Rockstar Nick. Mike isn’t going to be a big immunity threat, he isn’t an obvious jury threat, and he isn’t making any waves. Even if the Strike Force does blow up in their faces, I think Alec is much more primed to take the fall for the Goliath betrayal.

I do need to see just a little bit more from Mike if he is going to go all the way. I’m not sure I see Mike as a potential winner, but he’s in contention.

As I imagined last week, Gabby’s game has come alive! It’s an interesting situation here; the Davids are down to only five and Gabby doesn’t have any connection to Davie or Carl that we know of. What that means to me is that Strike Force is Gabby’s path forward. The Goliath members that Gabby has linked up with all seem to have taken a liking to her (and Christian and Nick). Given Nick and Christian have each other’s backs, I hope that the Gabby and Alison connection is just as strong. If this new alliance does blow up, she’ll need as many loyal allies to stand in front of her as she can get.

In order for this all to result in a win, I need to see that Gabby is connecting with the players outside of Strike Force. Elizabeth went to jury with what seemed like a good relationship to her, but there’s at least five more votes she’ll need to pick up along the way. I hope she’s able to add onto the momentum she’s currently gaining.

Every week seems to get worse for our jacket-lovin’ villain, Angelina. I’m here for this story evolution of Angelina, the Survivor player. It’s always fun watching a fan enter the game and have a totally different experience from what you can tell they expected to have (the good and the bad).

Angelina doesn’t seem like the kind of person who is used to throwing out an idea in a group/social setting and having it turned down. There’s a key difference between a player like Angelina and one like Gabby. Gabby eventually recognized that Elizabeth wasn’t a great choice to let go home… but she also recognized the plan was in motion and it was not worth the social capital to switch things up. Angelina on the other hand.. recognized Elizabeth wasn’t a great choice to go home and successfully pushed hard to turn things around… but then got pouty and petty after the original plan was reinstated.

Hey, if anyone can relate to being pouty and petty when things don’t go their way, it’s me. But this is Survivor, you have to play the give-and-take to do well… just like Nick did last week, sending home a David after Angelina and Mike gave up a Goliath.

Angelina, just take a deep breath and clear your head. But also… don’t because this is great TV.

Great observation valued reader.. yes, this bottom two is identical (iDANtical?) to last week’s. Dan may not deserve this spot, but it’s a tricky week. I could’ve justified giving it to Davie or Carl because I have no idea what those guys’ future plans are in this game, but that’s mostly speculation and would be a little unfair given how we saw Dan playing this week.

Dan just didn’t look so great. Alec came to him with information that Elizabeth was targeting him. On the bright side… they were able to take her out of the game. On the downside, Dan didn’t handle it well at all; he got emotional and wasn’t thinking clearly. Even as Kara tried to calm him down, he just couldn’t help but lose it.

While I was off about Carl using his nullifier on Dan last week, I don’t think it’s out of the cards to happen soon. Elizabeth wasn’t wrong.. Dan and Kara are a powerful duo in this game and the rest of the tribe will eventually want to split that up. I’m going to have to continue to come down on the side of Dan taking the fall, given he seems more well connected to players like John and Alec, while Kara will seem like more of a free agent once the “big strong immunity threat” she’s linked to is taken out.

The most confident I’ve ever felt in the 3-2-1’s short history goes to Alec, in this spot. Alec was all over the merge episode like it was Instagr… nevermind. We got to see his every step as he opened up new doors for himself that I never would have seen coming. While the rest of the Goliath tribe imploded on itself below the surface, Alec got ahead of the curve and started building relationships with Davids.

The work Alec put in this week was worthy of a top 3 spot, but it’s the little details that keep me from putting him there. Angelina finding out (which meant of course, the Goliaths all found out) that Alec flipped on Natalia didn’t go over so hot. There’s also Kara, who is probably not interested in being burned by him again and will be jump on the next chance to take him out if she has an inclining that he’s working with Davids. His gameplay would be perfect if not for the fact that he’s already a proven flipper!

With all that being said, Alec has set himself up well. He’s somebody we need to keep an eye on going forward, and I’m very happy to do so because Alec has been top-tier entertainment (especially given his archetype, which is usually not someone to game this hard).